Sofala looks more like a movie set than a real town. Nestled into the Turon River valley this tiny township once stretched for 16 km along the valley and was famed for the riches found in the area, the large population of 10,000 frenetic miners, and the amusing fact that it once had forty hotels. Today Sofala is a village with an authentic old world charm which, in some cases, is beautifully preserved and in other cases is in danger of falling down and disappearing. In essence its nothing more than three streets (Denison, Bowen and Barkly) which have no formal construction and no curbing and guttering and yet can legitimately claim to be 'Australia's oldest surviving gold town' because the town still attracts prospectors and fossickers over seventy years after the last gold mine closed down.

Sofala is located 232 km north west of Sydney via the Great Western Highway. It is 52 km north of Bathurst via Wattle Flat.

No one is sure how Sofala got its name although it is widely accepted that the prospectors and fossickers were working the banks of the Turon River before the name came into existence. It is possible that it took its name from Sofala, an historic seaport in Mozambique which had been operating since 915 AD. It is also possible that it was chosen by someone dreaming of great wealth because some sources identify Sofala as the home of the Queen of Sheba and as an unidentified place associated with Ophir which, in the Bible's Old Testament, was a place famous for its fine gold.

There are two useful brochures. Sofala - Historical Walking Tour which lists a total of eighteen places of interest in the town and Sofala - Self-Drive Tour. The highlights of the walking tour include:

Historical Walking Tour
It is a single sheet guide to the village which is available from shops around town and from the Bathurst Visitor Information Centre.

2. General Store
With its interesting lacework and its weatherboard construction the General Store in Denison Street is one of the town's most notable buildings. It was built in the 1860s to meet the needs of the local miners.

3. Oddfellows Hall
Typical of many villages at the time, Sofala had a strong Oddfellows Friendly Society which encouraged locals to join in social events. The simple timber building dates from 1892.

4. Weatherboard Cottage
Located in Denison Street next to the Oddfellows Hall is a low-lying early cottage with a veranda reaching into the street. It is very typical of the cottages built during the gold boom in and around the town.

6. Post Office Building
Now a combination of cafe, general store and private residence, the Post Office was built in 1879 and continued operating until 1989. It is a gracious two-storey brick building.

10. Police Station
The town's old police station, on the corner of Barkly Street and Davis Street, has been a private house since the 1950s.

11. Catholic Convent
Across on the hillside beyond Davis Street can be seen an elegant two storey building which started life as a Catholic Convent and became the town's Presbytery in 1914. It is now a private residence.

12. Gas Hotel
This hotel, in Bowen Street, dates from late 1851 and, because the foundations are timber stumps which have sunk over time, the building looks as though it was knocked together by a very drunk carpenter.

14. Court House
This building has changed function three times. It was built in 1874 as a court house. By 1934 it had become the local hospital and in the early 1960s it became the Community Health Centre. It is a distinctive building standing at the end of Denison Street and dominating the streetscape.

15. Cafe Sofala
Dating back to the age of the goldrush this building, now a cafe, has had a chequered career. It started as a blacksmith's shop and evolved into a service station. In recent times it has been a cafe and restaurant catering to the visitors to the town.

16. Bank of New South Wales
The most elegant and well preserved building in Denison Street, this is a typical country bank with the manager's residence on the first floor and the bank on the ground floor. It was built during the 1870s and still features an unusual metal roof.

17. Hylands Hotel
Built on the site of the Globe Hotel (one of the town's original pubs) it still has the original shingles and cellar. It is now a private residence.

Upper Turon
This drive includes the Church of England cemetery (with graves dating from 1851), the old Sofala school (1881), the original hospital (1860s), the original diggings, the Chinese settlement, Ration Hill and Pennyweight Creek.

Lower Turon
This drive includes Spring Creek, the remains of the 'Queenslander Battery', a picnic spot where you can still pan for gold and then drive on through Sheep Station Point, Bathurst Point, Patterson Point and New Zealand Point to the unusual Wallaby Rocks (a sheer wall of rocks rising from the Turon) which is a good place for swimming. The map and the instructions on the brochure are easy to follow.

Wattle Flat
Wattle Flat is located 8 km south of Sofala on the Bathurst Road. The main attraction (apart from the old stone church on the main road) is the 'Buurree Walking Trail' which is a leisurely 3 hour stroll which takes walkers to the top of a hill overlooking both Wattle Flat and Sofala. The trail is an interesting combination of fauna (there are many kangaroos in the area) and flora as well as ruins and remnants of the goldrush era.

Turon Technology Museum
Located 7 km north-east of Sofala, at 5833 Ilford Road, is the Turon Technology Museum which focuses of power technologies from the period 1850-1950. This is a professionally organised, and properly documented, display of steam turbines, hot-bulb engines, internal combustion engines, diesel engines which is owned by Jim and Jenny Walker. The typical visit takes two hours . The engines are spread through seven buildings. As the website explains: "starting with an c1845 horizontal steam engine and an 1866 Marshall portable engine (believed to be the oldest Marshall product in the world and the oldest documented portable in Australia) through to vertical and horizontal engines of the early 1900s. Then to kerosene diesel (1904) and on to the internal combustion engines of the 1930s, '40s and '50s, culminating with an English Electric Diesel engine of 2,200 BHP weighing in at 61 tons." The museum is typically open two weekends a month (see the website). The highlight is probably the  firing up of the steam engines. A guided tour is included in the admission fee.  There are picnic areas, a kiosk serving hot food and toilets. Check out http://www.turontechnologymuseum.com/ for details of opening times and steam engine exhibitions. Tel: (02) 6358 8434.

* Prior to the arrival of Europeans the area around Sofala was home to the Wiradjuri Aboriginal people.

* Sofala came into existence as a direct result of the goldrush to the area when Edward Hargraves discovered gold at Summerhill Creek on 12 February, 1851.

* By June, 1851 a tent city spread across the valley and both the Royal Hotel and a General Store had been constructed.

* Sofala was officially proclaimed in August, 1851.

* By November, 1851 a travelling journalist was reporting: "For the most part, Sofala presents to the spectator a strange jumble of tents of every possible shape: canvas, calico, slab and bark huts, bough gunyahs and nondescripts. Among the medley, two circuses are conspicuous. Stores of every possible description and containing varieties of merchandise are everywhere, embellished with placards announcing the best gold prices available. Shoe makers and blacksmith establishments boasting a large number of visitors."

* In 1852 there was a brief altercation between miners and police over mining licenses but it did not amount to outright rebellion. The miners caved in and the license fees (30 shillings per month) were retained.

* By 1853 visitors were describing the town as little more than "wood huts or as they term them shingle, weatherboard, houses and tents. There were many tents scattered along the river."

* By 1855, with new gold discoveries occurring at Wattle Flat, Sofala was in decline.

* By 1856 there were only 325 males and 203 females living in bark huts and working the goldfields in Sofala.

* In 1866 a traveller described the town as "There was a post and money order office, a telegraph office, a hospital, court of petty sessions, district court, police camp, gold commissioner's camp, three churches (Anglican, Roman Catholic, Wesleyan), two denominational and five private schools, two hotels (the Sofala Inn and the Barley Mow), a number of public houses and several extensive stores. There was a booking office at the Barley Mow for Cobb & Co., where coaches could be caught for Bathurst, Orange, Lambing Flat and Forbes. There are branches of the Savings Bank and Australia Mutual Provident Society in the township."

* Between 1899 and 1914 dredges were brought to the valley. At one point (it only lasted for two years) the Sofala Gold Dredging Co. treated 18,000 cubic yards of wash which yielded 84 ounces of gold.

* The history of the town in the twentieth century is one of decline as the gold runs out or becomes increasingly hard to extract.

* In 1947 the artist Russell Drysdale won the Wynne Prize with a painting of the main street titled Sofala.

* In 1948 all commercial gold mining in the district finished. It had lasted for 92 years.

* In 1974 the town was used as the setting for Peter Weir's movie, The Cars That Ate Paris.

There is no dedicated website for Sofala. The Destination NSW website has useful information. Check out http://www.visitnsw.com/destinations/country-nsw/bathurst-area/sofala. Equally the Bathurst Region has an entry on the town - check out https://bathurstregion.com.au/visit-bathurst/villages/sofala. 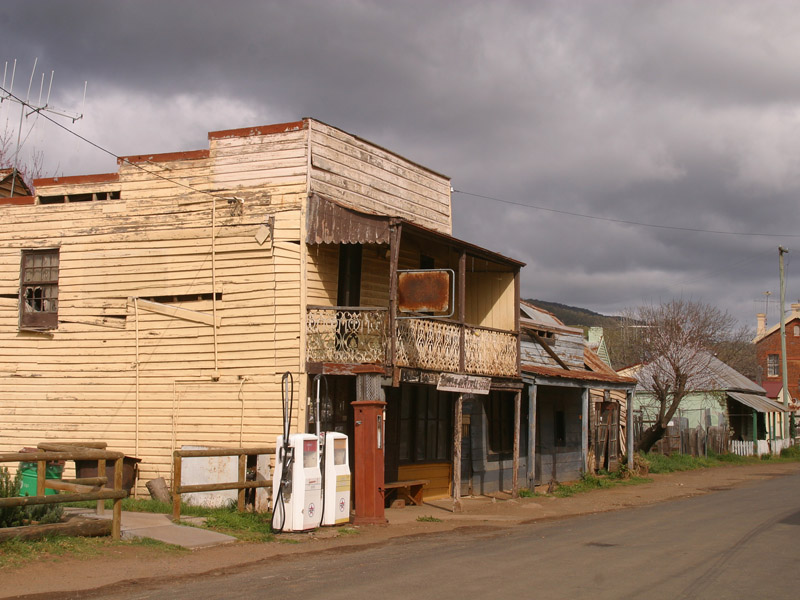 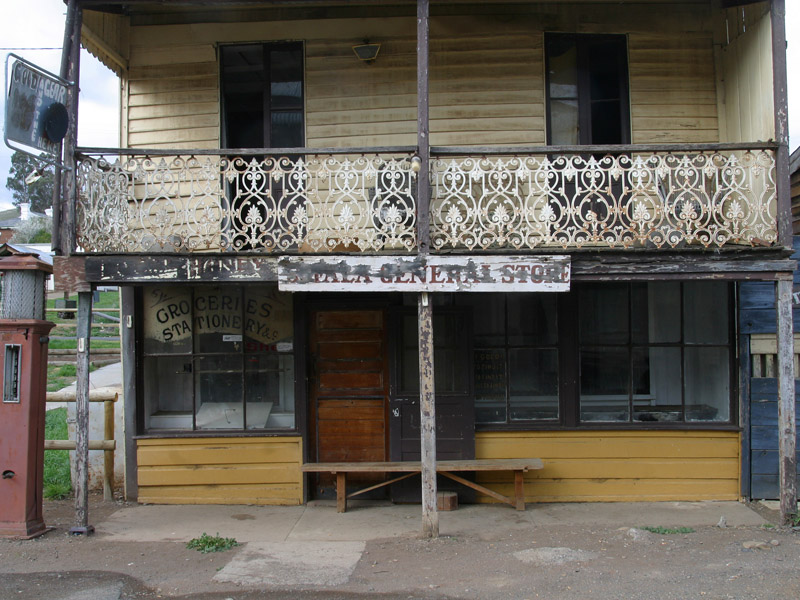 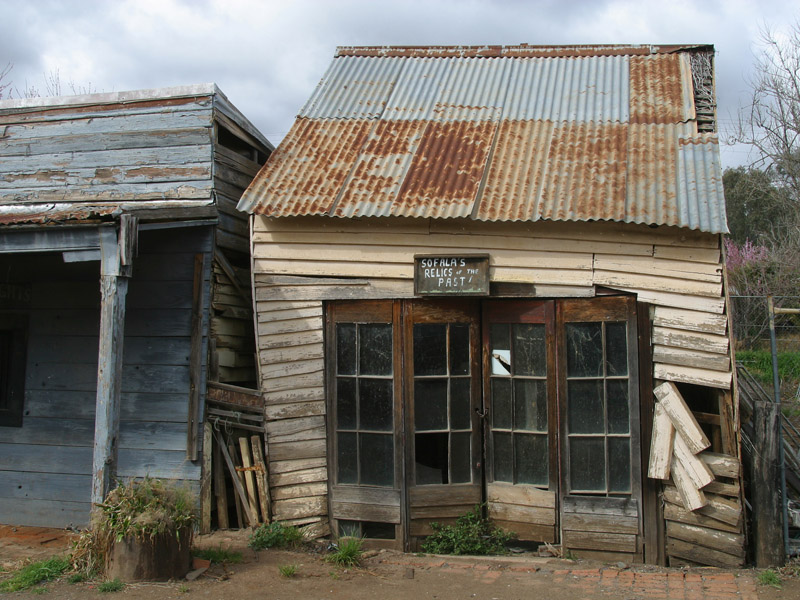 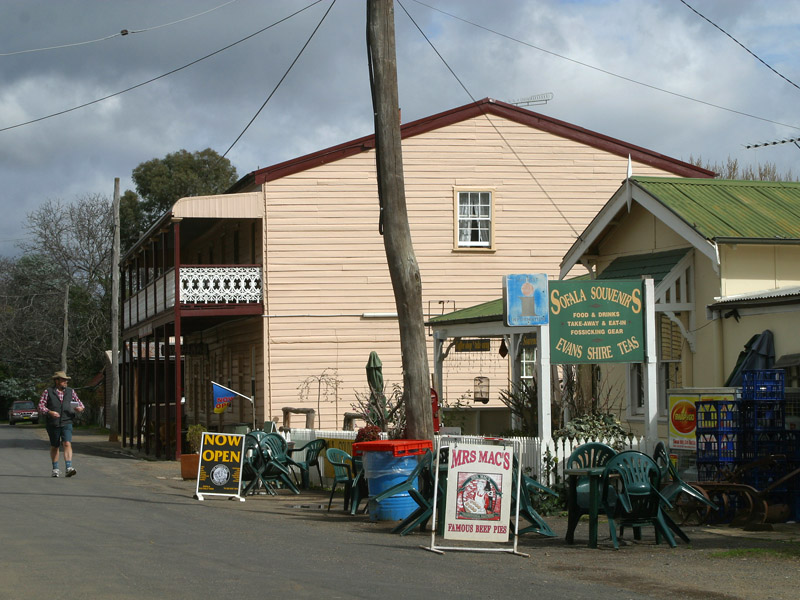 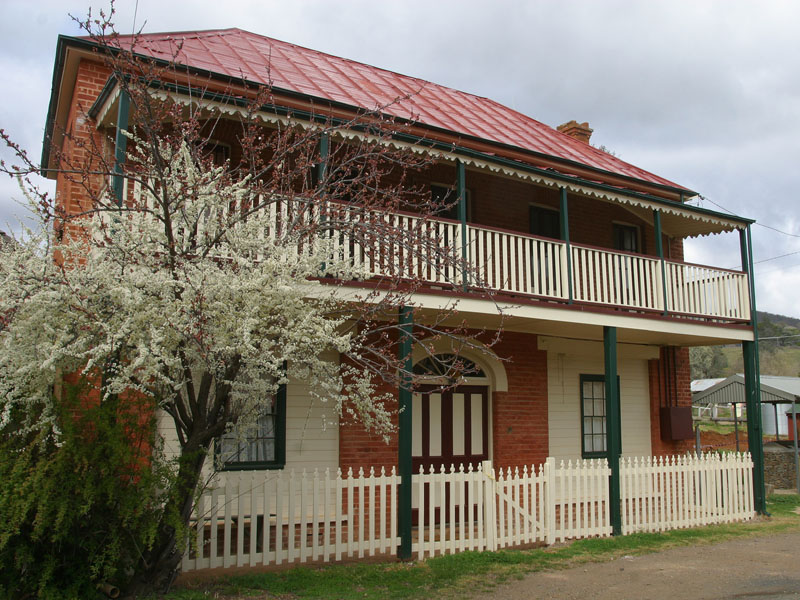 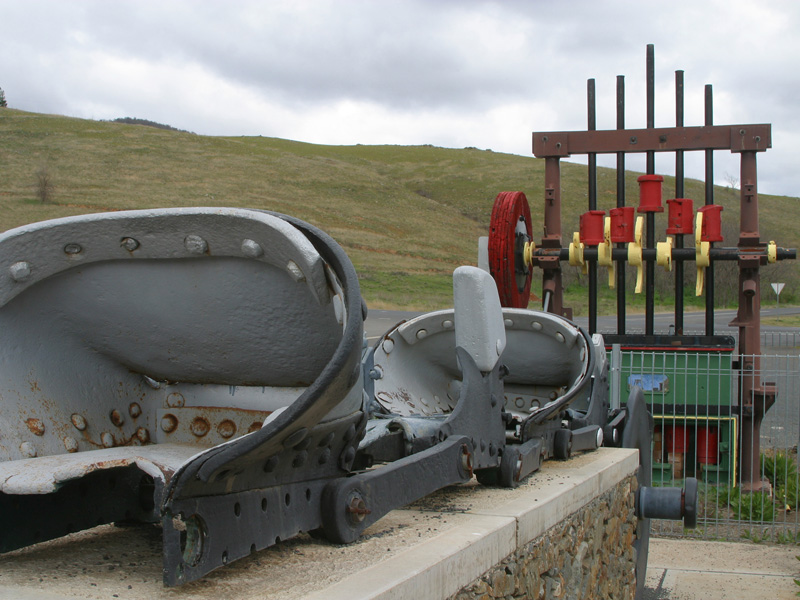