Town which was once the grain capital of Van Diemen's Land

Today Sorell is essentially a modern service town for travellers on the road between Hobart and Port Arthur. It is also vital for the surrounding farming district as, historically, the district around the town, was once known as the grain capital of Van Diemen's Land. Travellers heading for the Tasman Peninsula should stop at Sorell to admire the three early churches and learn about the history of this early Tasmanian farming settlement.

Sorrell is located 26 km north-east of Hobart on the Tasman Highway.

There is a useful brochure - Let's Talk About Sorell - which is available at the Visitor Information Centre. It is a photocopy of a brochure originally produced in 1988. The brochure provides a brief history of the town and lists a total of 16 buildings and place of historic interest around the town. Of particular interest are:

1. St George's Anglican Church -  Located in Gordon Street this simple, but impressive, church was consecrated on 7 May, 1826. The first service in the area had been held in 1819 and the church was a substantial building designed to hold both soldiers, free settlers and it had a gallery for convicts. It was rebuilt in 1883 and today is a small and attractive stone, gothic style church surrounded by graves of early settlers. The building is classified by the National Trust.

3. Scot's Church - Located in Arthur Street is described in the National Estate Register as "A sandstone Romanesque Revival church, built in 1842 to a design by James Blackburn, with gabled roof, a central tall square tower, semi-circular arch-topped entrance and buttresses. Windows are tall and multi-paned, with arched tops, and simple, engaged columns at the sides. The northern facade has a fine, central recessed window, and flanking columns in relief. An unusual stone church which is a fine example of Blackburn's work." It was restored in 1960-1961 with assistance from the National Trust and the government.

4. St Thomas's Catholic Church - Located in Arthur Street over the road from Scot's, is a small and simple sandstone Gothic Revival building which was constructed between 1864-1866 with the foundation stone being laid on 20 April, 1864. The site was donated by Andrew Council who also provided £200 to help pay for the construction. It is listed by the National Estate.

6. The Barracks - Located in Walker Street the barracks were used to house soldiers during the infamous "Black Line" attempt to round up all Aborigines on the island. Built circa 1827 they were planned as a long row of cottages but only two were completed.

* Prior to the arrival of European settlers the shores of the Derwent River were home to the Nuennone Aboriginal people.

* The Sorell district was explored in 1805 (less than a year after the settlement at Hobart Town) by Lieutenant Governor Collins who named the shallow stretch of water between Sorell and Midway Point, Pittwater after William Pitt, the British Chancellor of the Exchequer.

* By 1808 settlers had moved into the area and were successfully growing wheat.

* In June, 1821 Governor Lachlan Macquarie visited the settlement and named it after Lieutenant Governor William Sorell who was Governor of Van Diemen's Land from April 1817 - May 1824.

* Early in its history the entire town was held up the bushranger Matthew Brady who caught the local soldiers by surprise, locked them up and set the convicts free.

* From 1815 to the 1860s Sorell was the most important grain centre in Van Diemen's Land with excess grain being shipped to New South Wales.

* In 1854 plans for a causeway were drawn up by Sir William Denison.

* The first Sorell Municipal Council was proclaimed in 1862.

* In 1874, at a cost of £27,000 the 5 km causeway across Pittwater linking Sorell to Midway Point and Midway Point to Hobart was completed. It had taken six years and was primarily designed to link Port Arthur with Hobart.

* A telegraph service to the town was established in 1876.

There is an official website - http://www.sorell.tas.gov.au/our-municipality/townships/sorell - which provides details of amenities and attractions in the area. 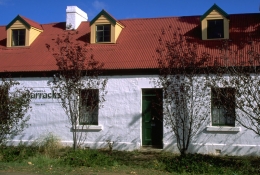 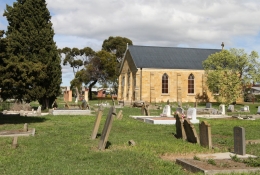 St George's Church and graveyard - the church was consecrated in 1828