Coastal town with excellent beaches and a fascinating historic gaol.

South West Rocks is a coastal town which attracts both holidaymakers and retirees. Like all the North Coast towns that are not on the Pacific Highway, it is most commonly bypassed by holidaymakers. This has resulted in a town removed from excessive, modern development. It is a haven for people looking for quietness and coastal relaxation. For many years it was a popular hideaway for television personalities eager for a little privacy. Today the township is primarily a tourist destination. It has plenty of accommodation, beautiful foreshores, pleasant beaches, and particularly beautiful stands of Norfolk pines.

South West Rocks is located 454 km north of Sydney via the Pacific Highway and Plummers Lane.

There is some confusion over the origin of the name. The town was established in 1896 and by 1902 a Pilot Station was operating. The most plausible explanation for the name is that it was advice from the pilot officer. He instructed vessels to anchor in Trial Bay so the rocks would be south-west of their anchorage. The locals decided upon the name for the town in the 1910s.

Boatman's Cottage
The Boatman's Cottage is both the town's Visitor Information Centre and a museum with an interesting display of the maritime history of the local region. In the grounds is the Macleay, the Macleay River's first powered pilot boat.

Trial Bay Gaol
Located on the southern headland at Arakoon overlooking Trial Bay, Trial Bay Gaol is a remarkably well-preserved ruin of a prison. It was established in 1876 and built between 1877 and 1886 to house 'good conduct' prisoners. Built out of grey granite quarried on the site, it is characterised by an hexagonal structure with three cell blocks radiating from the main entrance. Its initial purpose was to house cheap labour to help with the construction of a 1.6 km breakwater to protect Trial Bay and make it a suitable harbour. The second (southern) wing of the gaol was completed in 1900 and included electric lights, a new kitchen, a scullery, bakehouse, toilets, wash house and weather shed all of which suggests that it was planned to last for decades. However only three years later the project was abandoned and it was closed in July, 1903. By 1903 the breakwater had only reached a little over 300 metres and a storm that year reduced it to little more than a pile of rubble. In 1904 the external buildings were sold off. It was reopened in 1915 and used to intern Germans until July, 1918. The German internees established their own band, turned part of the gaol into a tennis court and one visitor described the nights as being more like a pleasant Teutonic beer hall than a prison. In 1922 all the moveable buildings and internal fixtures were stripped out leaving only a shell of the former gaol. On the hill above the gaol there is a monument to all the Germans who died while interned at Trial Bay. It is sign posted and is located to the east of the prison. Trial Bay Gaol is open from 9.00 am - 4.30 pm. For more information contact (02) 6566 6168. There is an outstanding, and detailed, website at http://www.migrationheritage.nsw.gov.au/exhibitions/zivillager/history.html which provides a very detailed history of the Gaol. Information about entry fees and other details is available on http://www.nationalparks.nsw.gov.au/Arakoon-National-Park/Trial-Bay-Gaol/tourist-information.

Monument Hill Walking Track
This is a short, 2 km loop walk which takes around one hour and offers excellent views across Trial Bay and the Trial Bay Gaol.

Arakoon State Recreation Area
Both Monument Hill and Trial Bay Gaol are part of this recreation area which was established in 1965. There are a number of excellent walks ranging from the short - the Bridle Track (500 m each way, a total of 30 minutes); Little Bay to Gap Beach (takes about 45 minutes), Monument Hill Walking Track and Powder Magazine Walking Track - to a long and quite difficult walk 10 km along the coast from Trial Bay to the Smoky Cape Lighthouse. For more information check out http://www.nationalparks.nsw.gov.au/parks?keyword=Arakoon%20National%20Park which provides details of each of the walks. The National Parks website explains that the park: "features a landscape of eucalypt forests, heathlands, wetlands and rocky outcrops that are home to a large range of birds. You’ll find black swans and herons in the park’s wetland areas, and in the heathland’s casuarina and banksia you might see honeyeaters, quails and fantails ... In spring, look for glossy black cockatoos feeding on she-oak seeds."

Fish Rock Cave
Fish Rock Cave, which is located 2 km off the coast from South West Rocks, is rated as one of the top ten dive sites in Australia. It is recognised as one of the largest ocean caverns in the southern hemisphere. The cave which is entered 24 metres below the surface and which is 125 metres long is characterised by coral (the pink gorgonian coral is particularly impressive), live cowry shells, trumpet fish, Grey Nurse sharks, wobbegong sharks, black cod and stingrays. There is excellent, detailed information, and a short video, at http://www.southwestrocksdive.com.au. The South West Rocks Dive Centre also offers good dives at Ladies Reef, Gaol Reef, Black Rock and Green Island. South West Rocks Dive Centre is located at 5/98 Gregory Street, South West Rocks. Telephone: (02) 6566 6474.

Smoky Cape Lighthouse
Smoky Cape Lighthouse is located on the edge of the Hat Head National Park. Built in 1891 it is 17.4 metres high, stands 128 metres above sea level and has a range of 26 nautical miles (43 km). It was designed by the Engineer-in-Chief of Harbours and Rivers in an octagonal shape because it was easier to build than a round shape. Lighthouses of Australia note: "The tower is divided into two storeys, with iron floors and staircases. The crown is a typical [of James] Barnet being granite voussoir blocks supported on moulded granite cantilevers. The balcony sports an ornate gun metal railing stamped with Queen Victoria's mark." By 1912 it was being lit by kerosene which changed to electricity in 1962. It was automated in 1988 and has since been de-manned. For detailed information check out http://www.lighthouses.org.au/lights/NSW/Smoky%20Cape/Smoky%20Cape.htm. The lighthouse is clearly signposted from various points on the road into South West Rocks. Perched on the top of a cliff it offers wonderful views to both the north and south and heart stopping views of the waves and rocks  below. Today, like many lighthouses along the coast, it operates as particularly dramatic and unusual  coastal accommodation. It is possible to book the Head Lighthouse Keepers Cottage (built in 1891) and two Assistant Lighthouse Keepers Cottages. Check out http://www.smokycapelighthouse.com/smoky_cape_accommodation.htm, tel: (02) 6566 6301.

Hat Head National Park
Hat Head village is located in the heart of Hat Head National Park 27 km south of South West Rocks. The area has excellent surfing beaches and good fishing. It is also noted for the whales and dolphins off the coast and the many coastal birds which live in the coastal heathland. Hat Head National Park is 6,445 hectares with camping facilities at Smoky Cape and Hungry Head. For more detailed information check out http://www.nationalparks.nsw.gov.au/parks?keyword=Hat%20Head%20National%20Park where the National Parks list eleven activities in the park including Captain Cook's Lookout near Smoky Cape Lighthouse which is an ideal location for whale watching between May and July; the Connors Walking Track - 6.8 km return, medium difficulty, this track traces the rugged coastline offering the walker a journey through rainforest and dramatic coastal views; Gap Beach Walking Track - a challenging walk for experienced bushwalkers which climbs Little Smoky Mountain before descending to North Gap Beach; Green Island Walking Track - a 3 km return walk of medium difficulty which takes around 90 minutes and is particularly impressive in spring when the area is alive with wildflowers; Jack Perkins Walking Track - only 700 m it takes around an hour each way but offers some of the best views in the park; Kinchela Trig Lookout Walk; Korogoro Walking Track; Little Bay to Smoky Cape - a 10 km walk which passes through rainforest and grassy woodland; and the Rainforest Walking Track.

* In 1770, when he sailed up the east coast of Australia, Captain James Cook noted in his journal that there was smoke and fire (almost certainly from a major burnoff by the local Aborigines) on the mountains and, with no great sense of imagination, named the place Smoky Cape.

* In 1816 the brig Trial was stolen by convicts who attempted to sail it to South-East Asia. It was wrecked on South West Rocks and consequently the bay was named Trial Bay.

* The wreck was discovered by Captain Thomas Whyte in 1817 but there was no trace of the convicts.

* Between 1863 and 1866 there were so many shipwrecks on the rocks that it estimated that 90 ships hit the rocks with the loss of 243 lives.

* In 1864 the Wooloomooloo ran aground on the rocks. Today there is a monument on the headland to the passengers and crew who were drowned.

* In 1866 Arakoon was established as the first township on Trial Bay.

* By 1870 parliament voted £10,000 to build a deep water harbour at Trial Bay and a breakwater to protect the harbour.

* Work started on a gaol at Trial Bay in 1876. The prisoners began to build the breakwater. The plan was fraught with problems. Heavy seas washed parts of the breakwater away and the plan was abandoned. The gaol was not completed until 1886.

* By the 1880s the beach was a popular place for people from the Macleay Valley.

* The township of South West Rocks was established in 1896.

* The Southern wing of the Trial Bay Gaol was completed in 1900.

* A Pilot's Station was constructed in 1902 and the town slowly grew up around this activity.

* In 1922 Trial Bay Gaol was stripped of all moveable materials and left the ruin that it is today.

* In January 1972 the town achieved national headlines when the tug Polaris reached Trial Bay with a showboat - Sydney Queen - and two Newcastle-based vehicular ferries - Koondooloo and Lurgurena. They were being hauled 4000 km from Newcastle to Manila. The three vessels were moored to the buoys used by oil tankers but a gale caused all three to break away and drift ashore where they became entrenched in deep sand and were subsequently left to decay.

New South Wales Tourism has a good site with information about restaurants in the local area. Check out http://www.visitnsw.com/destinations/north-coast/kempsey-area/south-west-rocks. 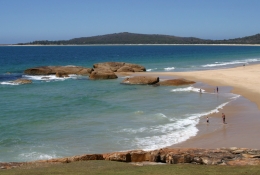 The beach at South West Rocks 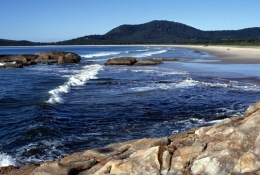 The beach and rocks at South West Rocks. 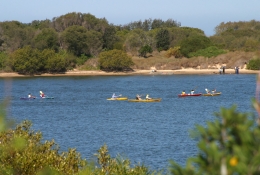 Canoeing at Stuarts Point on the waters behind South West Rocks beach. 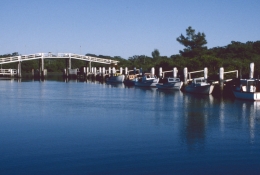 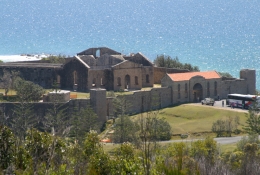 The ruins of Trial Bay Gaol from Monument Hill. 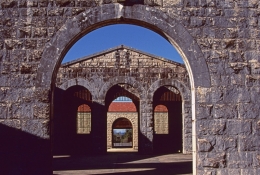 The entrance to Trial Bay Gaol 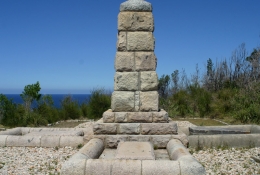 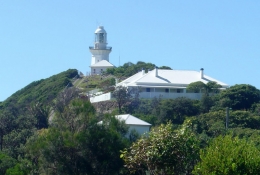 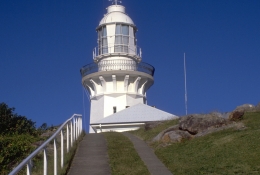 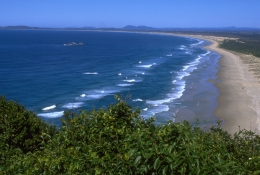