Historic gold mining town on the eastern edge of the Western Australian wheatbelt.

Southern Cross likes to see itself as having a double identity. It is the last town on the eastern edge of the wheatbelt and the first town on the Eastern Goldfields. Its historic importance lies in the fact that in 1887 it became the first major gold discovery in the Eastern Goldfields and therefore, for a time, it was seen as the mother town of Coolgardie and the grandmother of Kalgoorlie. This status continued when, albeit briefly, it became, the end of the railway line until it pushed on to Coolgardie.

Today it is a quiet town notable more for its wide street, its large pub on the Great Eastern Highway, and its interesting museum. One of the town's charming qualities is that the stellar Southern Cross associations have led to other 'star inspired' streets including Sirius Street, Altair Street, Centaur Street, Orion Street, Taurus Street, Polaris Street, Spica Street and Phoenix Street.

Southern Cross is located 369 km east of Perth on the Great Eastern Highway and 357 m above sea level.

It is hard to imagine a more romantic name. Southern Cross was reputedly named after the famous constellation which Thomas Risely and Mick Toomey, who discovered the gold which led to the settlement of the area, claimed had been led to their discovery. They named the goldfield Southern Cross and the name of the town followed. In his writings Thomas Risely recorded: "Myself, Toomey and Charlie Crossland, started out from our camp at Barcoyton. After prospecting the belt for some days our water gave out. Our blackboy whom I call Wheelbarrow, said he knew plenty of Gabby (water) at Koorkoordine. When we got to Koorkoordine we found one of Hunt’s dry wells, just as dry as we were. We decided to start back through the night and return to our camp, distance about 40 miles, and we travelled by the Southern Cross - taken to stars to the north - thanks to Charlie Crossland’s knowledge of the stars. Or our bones would be bleaching in the scrub now, as we were two days without water at this time. We had to remain at our camp until rains came, them myself and Mick Toomey set out again. We discovered gold four miles from Koorkoordine. I named the place Southern Cross."

Yilgarn History Museum
Located in the Registrar’s Office and Court House (both built in 1891) in Antares Street, the Yilgarn History Museum is a typical rural museum with a bewildering display of memorabilia. It has a total of five galleries inside, one outside and the Blythe Pavilion. The displays include such unusual items as Western Australian timbers, Yilgarn minerals, cemetery registers, historic prospecting gear and laundry implements, a camel wagon and an old telephone exchange. Of particular interest (at least to me) were a personal spittoon and a "permit to employ an Aborigine" dated 1943 and costing 5 shillings. The museum is run by the Southern Cross and Yilgarn Historical Society. It is open from 9.00 am - 12.00 noon and 1.30 pm - 4.00 pm Monday to Saturday and 1.30 pm - 4.00 pm on Sunday.

Registrar’s Office and Court House
Although they are modest buildings at the end of the town's main street, the Registrar’s Office and Court House continued to operate until 1976 and were the site of many famous events in the history of the Eastern Goldfields. It was in this building that Paddy Hannan (the man responsible for finding the Golden Mile upon which Kalgoorlie's fortune is based) took out his Miner’s Right and it was to this same building that Arthur Bayley came to register the claim which subsequently became the rich fields at Coolgardie. This was also the location of the first claim on the Lake Dundas (Norseman) goldfields. For a number of years the Southern Cross Court House and Register's Office were the heart of the Eastern Goldfields.

No 6 Pump Station
Characterised by a tall steel chimney, the No 6 Pump Station is located at Ghooli 11 km east of Southern Cross via the Great Eastern Highway. If you look carefully it is possible to see remnants of the buildings occupied by the small community who operated the Pump Station after it was installed. There is evidence of a tennis court and a children's playground. It is one of a series of eight pump stations used to carry water from Mundaring Weir to Kalgoorlie on C Y O’Connor’s pipeline. Listed by the National Estate, the No 6 Pump Station was originally fuelled by coal but this was replaced by wood and, in 1969, by electricity. The advent of electricity meant that it was capable of pumping 120 million litres a day.

Pioneer Cemetery
The Old Pioneer Cemetery, located off the Great Eastern Highway at the eastern end Southern Cross, has been redeveloped by the Southern Cross Historical Society as a Pioneer Memorial. It was used briefly from 1891–1898 and only 256 people are buried in the cemetery. A staggering 94 were buried in 1895. The high incidence of typhoid is recalled on the headstones of many of the miners.

Fraser’s Mine
Fraser’s Mine, upon which the town of Southern Cross was created, is located over the hill behind the Palace Hotel. Hugh Fraser, an experienced prospector, pegged out the most important gold lode near the town and it was Fraser’s Mine which drove the town's prosperity. The old head frames are still on the site and nearby a modern open cut mine is still exploiting the quartz and greenstone fault which Fraser identified as being rich in gold. Fraser died penniless and the town mayor paid £20 to have him buried as a citizen rather than a pauper. Today there is a monument on Wimmera Hill and the view across the open cut mine from the Marvel Loch Road is a reminder that there is still payable gold in the district.

Wildflowers in Spring
The museum and Visitor Information has a brochure - Yilgarn - A Colour Spectacular of Wildflowers - which offers specific directions for a round trip where the traveller will see quite specific and impressive displays of flowers. It requires a day and covers over 200 km but it offers such specific advice as "turn left into Dulyalbin Road, following this road for 23.3 km you will see beautiful examples of the brilliant Orange Verticordia (Morrison), Native Fuchsia, Calytrix, Ravensthorpe Bottlebrush and Cricketball Hakea". It is a wonderful way to experience the magic of this marginal countryside at its most spectacular.

Hunt’s Soak - Koorkoordine Well
Located 7 km north of Southern Cross Hunt’s Soak is one of the daisy chain of wells and soaks which provided reliable water for a route across Western Australia until C Y O’Connor's pipeline was completed. The Koorkoordine well was built in 1866. The work was carried out by Pensioner Soldiers and probationary convicts. The well was filled by water from a nearby traditional Aboriginal soak. The well was 10 feet across, 10 feet deep and could supply 10 bullocks, 10 horses and 15 men for a month. It was indirectly responsible for Thomas Risely and Mick Toomey finding gold in the area because when they reached the well it was dry and they had to keep moving. Following the Southern Cross in the night sky, they discovered gold. There is a brochure with an explanatory map available at the Museum and Visitor Information Centre.

Karalee Reservoir and Dam
Located about 50 km eastwards of Southern Cross, the Karalee reservoir, rock catchment and aqueduct, a natural rock formation adapted to maximise the catchment and storage of rainwater, was listed on the State's Register of Heritage Places in 2001. It was a vital part of the development of the railway from Perth to Kalgoorlie.

Water was a constant problem for the railways because steam transport required water for locomotives, construction work and employees. The railways solved this problem by developing places like the Karalee reservoir. During 1895 and 1896 a railway between Southern Cross and Coolgardie was constructed. It passed 3.1 km south of Karalee Rock and a railway engineer, William Shields, designed the Karalee Water Supply based on an estimate that there would be one train per week. He calculated that the Karalee Reservoir would be adequate for up to twelve trains a week but Coolgardie grew so rapidly that within a year twenty trains were running between the two centres every day.

The Karalee rock catchment and reservoir was constructed by railway entrepreneur, William Noah Hedges, in 1897. It was ingenious. It used two huge granite outcrops. A stone dam wall was built around the perimeter of each rock and water flowing off the rock was caught by the wall, directed into a stone-lined sluice, and sent to a large earthen reservoir before travelling cross-county in a steel aqueduct and an earth channel. It is one of the miracles of this system that incredibly low annual rainfall (only 250mm per annum) resulted in substantial runoff - enough to fill Karalee with 10.64 million gallons (48.3 million litres). The water collected in the dam was piped to an overhead tank 3.6 km to the south near the railway station. Karalee continued to supply water until the introduction of diesel locomotives in 1953. In 1999 Karalee was handed over to the National Trust (WA). Today it offers a fascinating insight into the "water problem" is this area.

* Prior to the arrival of Europeans the area was inhabited by the Kalaamaya Aborigines.

* The explorer Henry Maxwell Lefroy passed through the area in 1863 and later announced that it had great agricultural potential.

* By the 1880s a small number of pastoralists had settled in the area.

* The Yilgarn Goldfield was proclaimed in 1888.

* On 17 September 1892 Arthur Wellesly Bayley rode into Southern Cross with 554 oz of gold which he had discovered at Fly Flat, now Coolgardie.

* The town’s growth was dramatic. In 1891 the first Courthouse and Register's Office was built in the town. They serviced the goldfields to the east.

* In 1893 Southern Cross became a municipality.

* In 1894 the railway from Perth reached the town which briefly became an important rail head.

* In 1902 C Y O'Connor's water pipeline began to supply the area with fresh and reliable water.

* Today the annual rainfall of 279 mm means that the land is marginal. In recent times the fluctuating price of gold has seen intermittent interest in Southern Cross. Gypsum, salt and iron ore are also mined in the area. The Shire of Yilgarn covers 3 million hectares and 230 farms producing grain, wool, sheep, cattle, pigs.

The local shire has a useful website - http://www.yilgarn.wa.gov.au - which has information about the town and the district. 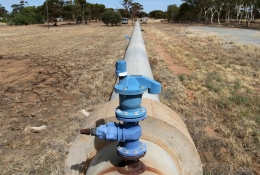 C Y O'Connor's pipeline stretches off into the horizon. 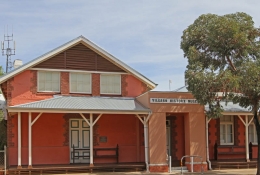 The Southern Cross and Yilgarn Museum 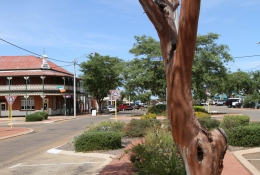 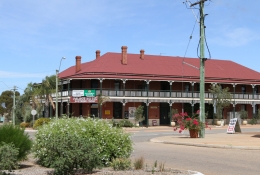 Palace Hotel at the entrance to Southern Cross. 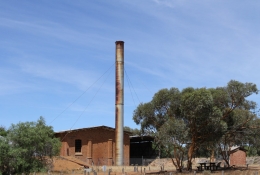 No. 6 Pump Station on the C Y O'Connor pipeline 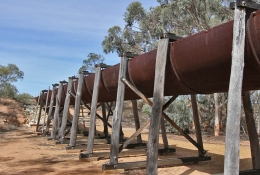 The steel aqueduct connecting the dam at Karalee Rocks. 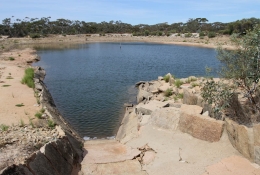 The dam and stone lined sluice at Karalee Rocks.