Northernmost section of the Gold Coast

Southport is an important commercial and administrative centre at the northern tip of the huge City of the Gold Coast - it is now the sixth largest city in Australia and the second largest in Queensland. It is situated around The Broadwater (a waterway at the mouth of the Nerang River) which is sheltered from the ocean by a long, narrow sandy promontory known as The Spit which extends to the southern tip of South Stradbroke Island. A narrow channel - the Gold Coast Seaway - separates The Spit from South Stradbroke. The Broadwater is home to an upmarket marina, a canal residential development (McIntosh Island), the Sea World hotel and entertainment complex, Palazzo Versace and the Sheraton Mirage Resort. Today Southport is a typically modern part of the City of the Gold Coast. Historically it came into existence as a holiday destination when Southport Hotel, a wooden pub dating from 1876, started to serve travellers who came with their horses, carriages and drays. Today it lies at the heart of a series of extravant theme parks - Sea World, Wet'n'Wild Water World, Australian Outback Spectacular, Warner Bros Movie World and Dreamworld.

Southport is located 73 km south-east of Brisbane via the Pacific Motorway at the northern end of the City of the Gold Coast.

In keeping with the development ethos of the Gold Coast, Southport was named by Brisbane mayor, state politician and newspaperman, Thomas Blacket Stephens, after a seaside resort town in Lancashire, now Merseyside. Stephens had been born in Rochdale, Lancashire.

Main Beach and The Spit
The Spit and Main Beach are a strange mixture of upmarket accommodation, attractive parks and a remarkably quiet beach. Known as Narrow Neck it includes the Southport Surf Life Saving Club on Macarthur Parade at the southern end and then a long narrow promontory known as The Spit which is traversed by Seaworld Drive which heads north past the Sheraton Mirage Resort & Spa, the Palazzo Versace and Sea World - all of which lie on the western side facing the Broadwater.

On the eastern side there are tracks through low lying coastal scrub and a long stretch of largely untouched beach. South of the Sheraton is Hollindale Park, which has walking tracks, public toilets and picnic facilities. In the north-western corner of The Spit is Doug Jennings Park and extending 500 metres out into the ocean at the southern edge of the Gold Coast Seaway (the narrow stretch of water between Southport and South Stradbroke Island) is a jetty popular with anglers.

The area is home to a diverse range of upmarket activities including charter services, cruises and water sports hire services all of which are available at the Mirage Marina. Unlike much of the Gold Coast this is an area which prides itself in its expensive hotels and its upmarket marinas. These stand in sharp contrast to the low coastal scrub on the eastern side of the spit.

Sea World
Sea World, facing The Broadwater, is a huge 25 ha marine theme park which offers a combination of rides, shows and attractions, including animals, thrill rides and family entertainment. So successful has Sea World become that there is now a specific hotel - the Sea World Resort - attached to the complex. The deals, rooms, packages and specific attractions are all covered in great detail at two website locations. For Sea World check out http://seaworld.com.au and for Sea World Resort head to http://seaworldresort.com.au.

The Broadwater
The Broadwater is a broad body of calm water at the mouth of the Nerang River which lies between the mainland and The Spit and South Stradbroke Island. There is a small opening to the ocean, known as the Gold Coast Seaway.

On the western side of The Broadwater, at Southport, the land is given over to foreshore parkland with an attractive swimming pool and areas for children to play. On the northern side is the suburb of Labrador with Leonard Fox Park on the foreshore. Labrador was named after the Labrador Peninsula in Canada. In 1881 a hotel was opened here by the Queensland manager of Cobb & Co coach services.  Today the Broadwater is a vast waterway used largely to moor luxury yachts. It is a pleasant retreat from the suburbs that surround it and young couples often bring their children to the excellent parks.

Sanctuary Cove
To the north of Southport the mouth of the Coomera River - a stretch of water which lies between South Stradbroke island and the mainland - was turned into  upmarket canal developments during the 1980s. The most famous of these was Sanctuary Cove created by a Queenslander named Mike Gore who became synonymous with the term 'the white shoe brigade', which was used to describe businessmen who were keen on developing every millimetre of the Queensland coast.  Sanctuary Cove gained worldwide publicity when Gore managed to persuade Frank Sinatra to open the development. Today it includes three golf courses and expensive housing designed for retirees. Much of the development has been carved out of the shores of the river. It is worth inspecting to "see how the other half live". If you want to know more, check out http://www.sanctuarycove.com.

Wet'n'Wild Water World
Located on the Pacific Highway at Oxenford, Wet'n'Wild is a 10 ha water fun playground with heated pools and slides. The theme park's activities range from family fun at the Wet'n'Wild Junior, Calypso Beach, Whirlpool Springs and the Giant Wave Pool (pretty funny given that real waves and real surf are less than a kilometre away) through to "extreme" activities with names like Blackhole, Kamikaze, Mach 5 and Tornado. Somewhere in the middle are rides like Mammoth Falls, River Rapids and Surf Rider. There is a total of 16 rides designed to keep the kids entertained all day. The emphasis is on diversity with something for each age group, from the hair-raising to the languid and lazy. The water areas are surrounded by grassy grounds with picnic and barbecue facilities and deck chairs for relaxation. For all the detailed information check out the website at http://wetnwild.com.au which has special deals, prices and information about all the activities.

Warner Bros. Movie World
The most famous of all the attractions in the area is the Warner Bros. Movie World located on the Pacific Motorway at Oxenford. Designed as a working studio with a number of large stages and an extensive range of state-of-the-art equipment. The combination of studio and fun park means that most of the Park's attendants are young actors hoping for work in the studios next door.

Warner Bros Movie World is basically an Australian combination of Disneyland and Universal Studios. It celebrates the fun and excitement of movies. Shops sell souvenirs as well as providing a wide range of food. Other attractions include rides through various movie scenes and a conducted tour of the movie studio which shows some of the techniques used to create cinematic illusions. One particularly appealing aspect of Movie World is the way that certain events just occur naturally (well as naturally as anything in a movie world) on the street. It is easy to spend a day here. For detailed information on the daily activities, the range of rides and the thirteen eateries on the site, check out http://movieworld.com.au.

Australian Outback Spectacular
In 2006 Warner Village Theme Parks spent $23 million building the Australian Outback Spectacular which is designed to provide an Aussie BBQ dinner complete with beef for the main course, ninety minutes of non-stop spectacular entertainment and to offer a night for the whole family. Located in Entertainment Road, Oxenford, the purpose-built arena is a wonder of modern technology. It has a seating capacity for over 1000 people. There are huge screens, room enough for a helicopter, and the huge central area, where the action takes place, is the size of an Olympic swimming pool and is covered with sand. For much more information check out http://outbackspectacular.com.au which provides details about the shows, the evening meals and the ticket prices.

* The narrow opening of The Broadwater was noted in 1822 by John Bringle.

* By the 1840s timber cutters had moved into the area seeking the rich harvest of cedar and tallow wood.

* The first known white settler around Southport settled in the area in 1869.

* The railway from Beenleigh reached Southport in 1889.

* By the 1890s, with the arrival of the railway, Southport had become a popular seaside resort and recreational fishing area.

* The town of Southport was officially gazetted in 1918.

* In 1959 the town of South Coast was changed to the 'City of Gold Coast' and Southport became the city's administrative centre.

Gold Coast Tourism has a useful website with lots of information about accommodation, attractions and events. Check out http://www.visitgoldcoast.com/places-to-see/southport for more information. 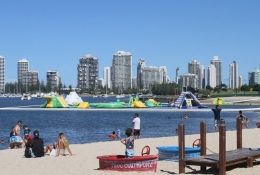 The pool on the western side of the Broadwater looking across to the high rise to the south. 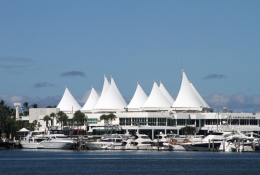 Marina Mirage on the Spit at Southport. 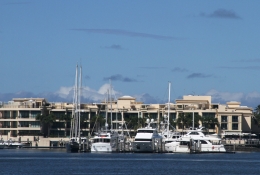 Palazzo Versace and huge boats moored in front of it on the Broadwater. 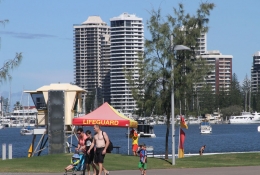 Walking in the Washington Waters Park beside the Broadwater. 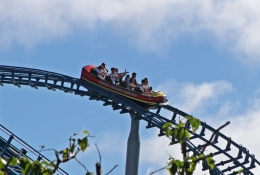 The roller coaster at Seaworld. 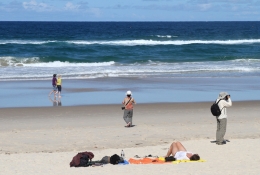 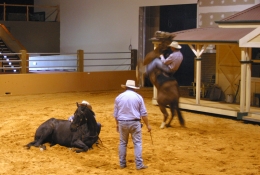 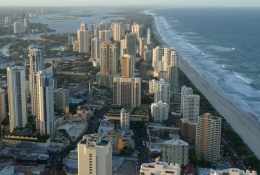 Looking from Q1 up the coast towards Southport in 2006. 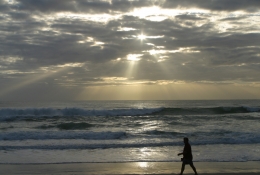 An early morning walker on the beach at Southport.