Southport is known as Australia's southernmost settlement. It is now little more than a quiet holiday retreat and, looking at the shacks and small shops, it is hard to imagine that in the early 1800's it was Tasmania's second largest town and it was proposed as the capital of the colony. It was a bustling and dynamic convict station, whaling station, timber town and international port exporting timber to Europe. The modern appeal of the town lies in its away-from-it-all sleepiness. It is known for its excellent recreational fishing and the journey to Roaring Beach and Lady Bay rewards the traveller with beautiful white sand beaches and bull kelp near the rocky headlands.

Located 97 km south-west of Hobart, via the Huon Highway, Southport is the southernmost settlement in Australia.

One more example of a name which states the obvious. Southport was named because it was the southernmost port beyond Hobart. More romantically it had been named Mussel Bay on 7 February, 1793 by Charles-Francois Beautemps-Beaupre, a hydrographer and cartographer travelling with Bruni D'Entrecasteaux on the L'Esperance, who was mapping Southport Bay. He named it the bay  'Baie des Moules' (Mussel Bay). It was subsequently changed to Southport.

Hastings Cave
Hastings Cave and Thermal Springs is located 10 km west of Southport. The central attraction is Newdegate Cave which is located about 5 km from the Hastings Cave Visitor Centre. The entrance to the cave is about a 5 minute walk from the car park through a particularly beautiful section of new growth rainforest - the forest was logged in 1917. The Parks and Wildlife service have produced a brochure (it is downloadable at http://www.parks.tas.gov.au/file.aspx?id=19220) which provides detailed information about the caves and the Thermal Pool.
Along the short walk to the cave entrance are signs which recount the hardships of the early timber cutters. On the right hand side of the path is an old logging platform where logs were hauled from the surrounding forest and loaded onto trolleys which ran along tram tracks to the sawmill in Hastings, 10 km away, where they were cut and prepared for export.
The rainforest includes ferns, moss, native laurel, mountain pepper, blackwood, sassafras, tea trees, kangaroo ferns, musk, silky fan ferns and myrtle and the fauna in the area includes platypus, trout and eel in the creek and quolls, lyrebirds and currawongs in the rainforest.
Newdegate Cave itself has one particular cave, Titania's Palace, which is one of the great cave experiences in Australia. It is located at the end of a large cavern and is a wonderland of dramatic stalagmites and stalactites. It is Titania's Palace which has led to Newdegate Cave being described as one of the most beautiful caves in the country. The guided tour lasts 45-50 minutes and includes more than 500 steps. Inspections of the cave are held at 11.15 am, 12.15 pm, 1.15 pm, 2.15 pm and 3.15 pm but they do vary according to the seasons. Information regarding entry fees and times are detailed on http://www.parks.tas.gov.au/index.aspx?base=4525.
The caves were named after Sir Francis Newdegate who was the Governor of Tasmania from 1917-1920. It is claimed that the Newdegate Cave is the largest cave in Australia which occurs in dolomite, rather than limestone.

The Thermal Pool
The Thermal Pool is a short walk from the Hastings Caves Visitors Centre. The Hastings Caves Thermal Pool area also includes a sensory trail (the Platypus Walk) and a Hot Springs Nature Trail. The Thermal Pool is set in bushland surrounded by lawns, good seating and modern picnic facilities. The pool remains at a constant 28-30°C throughout the year. Although the entry times are reduced in the winter months, the thermal pool is open from 9.00 am - 5.00 pm during the summer holidays. For specific times check out http://www.parks.tas.gov.au/index.aspx?base=4525.
The Parks and Wildlife website explains the thermal pools in the following terms: "The temperature of thermal springs may be due to three different causes: underground water (either meteoric or juvenile) coming in contact with hot underground intrusive rock of recent origin; volcanic activity, where the water is hot rather than warm; or simply the geothermal gradient of water coming from great depths, which is the most likely cause of heating at Hastings ...
The water probably enters the dolomite in the caves area at a higher elevation than the springs area, descends to 1000m in a continuous stream in the synclinal dolomite beds, passes beneath the quartzite beds and has sufficient hydraulic gradient to be forced up to the surface. It is contained in dolomite beds, ascends the major fault zone and then seeps through the alluvial cover.
The springs occur in several spots coinciding with an intersection between major faults and bedrock fractures over an area of about 25 hectares in the vicinity of the pool. The temperature of the water is 30°C and remains remarkably constant from day to day." For more information on the geology of the caves and the thermal pool check out http://www.parks.tas.gov.au/file.aspx?id=31231.

The Ida Bay Railway
Located at Lune River the Ida Bay Railway is a delightful two hour trip (7 km each way) through peaceful Tasmanian bushland from 328 Lune River Road, Lune River along the shores of Ida Bay. On the route it passes the old Ida Bay wharf and graveyard, the site of Jagers sawmill and reaches Deep Hole Bay. The tramway was constructed in 1922, is known to be the most southerly railway in Australia, and the carriages (some are built on bogie wagons dating from the 1890s) are driven by two Malcolm Moore diesel locomotives. In the summer months the tramway journey is made at 9.30 am, 11.30 am, 1.30 pm and 3.30 pm seven days a week. This is reduced in the winter months to Friday, Saturday, Sunday and Monday at 10.00 am, noon and 2.00 pm. Tel: (03) 6298 3110 or check out http://www.idabayrailway.com.au. There is a video of the journey at http://www.discovertasmania.com.au/about/regions-of-tasmania/hobart-and-south/dover.

Southport Lagoon Conservation Area
The Southport Lagoon Conservation Area, which covers 4,280 ha, lies between Southport and Recherche Bay. It includes the George III Monument Historic Site, the Ida Bay State Reserve and the Lune River estuary. The area is accessed on the Lune River Road or by the Ida Bay Railway. The management plan for the area can be downloaded at http://www.parks.tas.gov.au/file.aspx?id=6976.

George III Monument Historic Site on Southport Bluff
There is a monument on a 14.4 ha site at Southport Bluff to the convict ship George III which was wrecked off the coast in 1835 with the loss of 133 lives. The memorial was erected in 1839 and the remains of those who drowned are buried nearby. Unfortunately the monument is closed to the public because it is home to a highly endangered Tasmanian heath species (Epacris stuartii). See http://www.parks.tas.gov.au/indeX.aspX?base=6290 for more details. There is a useful map at http://www.parks.tas.gov.au/file.aspx?id=6620.

A Travellers Glimpse into the history of Recherche Bay
There is a excellent brochure - A Travellers Glimpse into the history of Recherche Bay - which identifies a total of twenty historic locations around Recherche Bay. Some, like Little Lagoon Beach where the French and local Aborigines met in 1793, are difficult to access but others, like the former timber hamlet of Moss Glen (which was a place where the French found water) are near the main road from Dover to Cockle Creek. At Adams Point there is a whale sculpture recalling the importance of whaling to the region. Adams Point was also the site of the first European burial in Australia. The brochure is available at the Huon Valley Visitor Centre, 2273 Huon Highway, Huonville, tel: (03) 6264 0326.

* Prior to the arrival of Europeans the area around Southport was inhabited Lyluequonny Aborigines.

* On the 7th of February 1793, Beautemps-Beaupre from the Esperance (Bruni D'Entrecasteaux's ship) mapped Southport Bay and named it 'Baie des Moules' (Mussel Bay)

* In 1837 a settlement was established with a Police Magistrate and a small number of troops.

* By the mid nineteenth century timber workers were in the area searching for stands of sassafras, huon pine and stringy bark. It became Tasmania's second largest town and was proposed as the capital of the colony.

* From the 1860s-1920s it was a bustling mill town and international port shipping valuable timber to Europe.

There is no Visitor Information Centre at Southport. The closest is the Huon Valley Visitor Centre, 2273 Huon Highway, Huonville, tel: (03) 6264 0326.

There is a charming cottage - Summertime Cottage at 120 Kingfish Beach Road. It is located on the beachfront. Check out http://summertimecottage.net.au or tel: 0410 583 213.

There is additional information at http://www.farsouthtasmania.com/places/southport and the Jetty House website has good information on the district. Check out http://www.southportjettyhouse.com/activities. 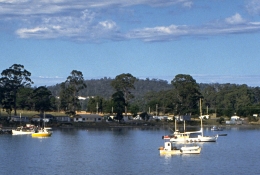 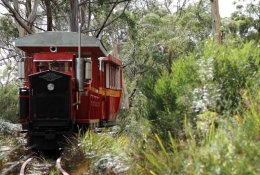 The Ida Bay Railway makes its way through the Tasmanian bush 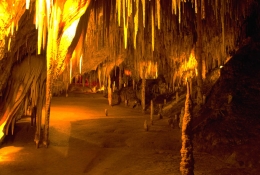 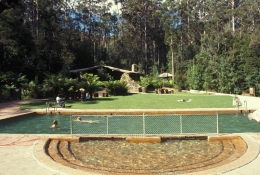