The small town of Springton lies at the south-eastern edge of the Barossa Valley and is surrounded by vineyards. It is known throughout the district for the unusual Herbig Family Tree where the earliest European settler in the district, a German named Friedrich Herbig, lived and raised his first two children.

Springton is located 63 km north-east of Adelaide via Birdwood and Mount Pleasant.

In the early days of European settlement there was a local dairy farm named The Springs Diary. When the town was surveyed it was a short step to turning Springs Dairy into Springton.

Herbig Family Tree
The Herbig Tree, located on Angaston Road in Springton is a strange footnote in the German history of South Australia. Friedrich Herbig, aged 27 at the time, was a tailor turned farmer who arrived in the colony in 1855. He travelled to Springton where he leased 80 acres from George Angas. Desperately poor he decided to live in a large, hollow red gum which has become known as the Herbig Family Tree. It was between 300-500 years old, had probably been struck by lightning, had a large area inside and secondary growth was starting to occur above the old trunk. A year after his arrival Herbig married Caroline Rattey, an 18-year-old, at Lyndoch. She came to live with him in the tree and it was there that the first two of their sixteen children were born. In 1860 Herbig and his family moved out of the tree to a two room pine and pug hut he built about 400 metres away.  By 1864 the family was living in a stone cottage. There is a tour of Springton which is organised by David Herbig, the great-grandson of Friedrich Herbig. Tel: (08) 8568 2287.

St John's Lutheran Church
Located in the tiny village of Friedensberg (it is on the corner of Lablach and West Dewells Road south of Springton), St John's Lutheran Church (St Johannes) is one of the oldest churches in the Barossa Valley. It was built in 1861 with money donated by George Fife Angas. It was a school during the week and a church on weekends.
The SA Memory on "Religion in South Australia" explains the history of the church: "'Christian Schooling' was one of the main aims of the 1877 Constitution of the Evangelical Lutheran Church of Australia. Consequently, a string of dual purpose church/school buildings were built through the Barossa Valley and the position of teacher was an important one in the community. The Lutheran congregation at Friedensberg ('Hill of Freedom') was formed in 1859, and the church/school built in 1861. The school remained in the church building until 1913, when a new school was opened in Springton. With 48 other Lutheran schools this was closed by an Act of Parliament in 1917, due to strong 'anti-German' sentiment during the First World War - despite the fact that most of the children were third generation Australians. Today the original church and school is a museum of school history."
Today the church is known as the Friedensberg Historic German School Museum and, as explained by South Australian Community History, "The small stone building is equipped as a typical old-fashioned one-room school of the late Victorian period.  Some of the original furniture and fittings are displayed such as wooden desks and benches with inkwells and slates, a blackboard, a British flag to salute and a map of the world showing the British Empire in pink.  There is an organ in the corner and the teacher’s desk at the front bearing the much-feared cane.  Displays of German school books, samples of written work and photographs of the period can be viewed at the back of the classroom." For more detailed information check out http://community.history.sa.gov.au/friedensberg-historic-german-school-museum or contact David Herbig, tel: (08) 8568 2287. David Herbig also has tours of the town. He is the great-grandson of the original Friedrich Herbig.

Wineries in the Area
In areas like the Springton district, where there are a number of cellar doors, it is best to refer to the specific knowledge by the wine experts. The Barossa Australia website provides an excellent site (check out https://www.barossa.com/wine/wineries-search) which has extensive information about the wineries in the region. Just type "Springton" into the Search Filter.

* Prior to the arrival of Europeans the area was home to the Peramangk Aboriginal people. They lived on a diet of grass seeds, kangaroos, wallabies, possums, lizards and fish and protected themselves against the winter cold with possum skin rugs. Their life was simple but perfectly in tune with the climate, flora and fauna of the region.

* By the 1830s Springton was known as Black Springs.

* By December, 1837 explorers had reached Lyndoch

* By 1838 other explorers had reached the Murray River passing through the Barossa Valley.

* Friedrich Herbig arrived in Springton in 1855.

* Herbig became important in the early life of the town eventually owning over 400 ha of land.

* The Lutheran church at Friedensberg was built in 1861.

* The church and school were closed in 1917 due to anti-German sentiment. They were reopened in the 1930s.

There is information about accommodation and eating in the district at https://www.barossa.com/visit/towns-and-villages/springton. 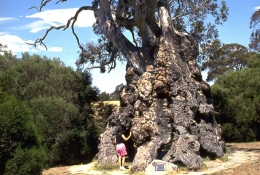 The Herbig Tree at Mount Pleasant 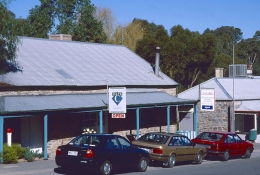 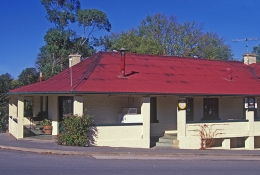 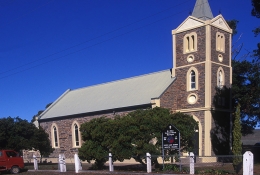