Charming Blue Mountains town known as the first town in the mountains.

Springwood is a substantial township, reputedly the second largest town (after Katoomba) in the Blue Mountains, and certainly the most important town in the Lower Blue Mountains. It has a thriving commercial centre built around the railway station and an unusual, winding main street. Beyond the town there are a number of lookouts and a delightful walk to Fairy Dell, an area covered in ferns which was a popular walk for holidaymakers who came to the town in its heyday between the 1880s and 1930s. Springwood remains special because it has developed on the south side of the railway and is separated from the noise and activity of the Great Western Road.

Springwood in the lower Blue Mountains is located 72 km from Sydney via the Great Western Highway and 371 m above sea-level.

In 1815 when he travelled over the mountains, Governor Lachlan Macquarie gave a number of towns their names. He wrote in his journal "We then haulted at three o'clock in a very pretty wooded Plain near a Spring of very good fresh Water and pitched out tent near the side of the road. The place being very pretty I have named it Spring-Wood." Although it was only applied to the area it eventually became the name of the settlement.

Historic Buildings in Springwood and the Springwood History Walk
At the School of Arts Square, about halfway down Macquarie Street, there is a map and a list of places worth checking out in Springwood. It has a total of 17 buildings and locations of which the most interesting are:

* Braemar which was built in 1892 by James Lawson as a private home. It later became a guest house and the Blue Mountains City Council purchased it in 1975. Today it houses the Local Studies Section of the Blue Mountains library. It is a typical, charming, late 19th century colonial cottage.

* Springwood Frazer Memorial Presbyterian Church, the most notable building on Macquarie Street,  was built from locally quarried stone in 1895. Upon his death in 1884 the Hon. John Frazer, a politician who had built a large mansion, Silva Plana, in Springwood, bequeathed £5000 for the building of the church.

* The Springwood Railway Station was built in 1884 and replaced a shed which had been at the station since 1867. The building was originally symmetrical and featured a high pitched iron roof behind two gabled parapets. It is now classified by the National Trust.

* Christ Church, Church of England, is located on the Great Western Highway. It was started in 1889 and not completed until 1962. The completion of the building occurred when the noted Sydney architect Sir John Sulman drew up plans which he provided free of charge.

Prime Ministers Corridor of Oaks
A local MP, Joseph Jackson, was a great admirer of Sir Henry Parkes. He was Parkes and the father of modern Australia. In 1933 he gave the local council land in Jackson Park (On Sir Henry's Parade which runs between Springwood and Faulconbridge on the southern side of the railway line) which was specifically and explicitly to create a Prime Ministers' Corridor of Oaks. The plan was to get every Prime Minister, and in the case of deceased Prime Ministers to ask their closest living relative, to plant an oak tree. Kevin Rudd planted his oak in 2012. It is a pleasant piece of parkland and an unusual celebration of Australian prime ministers.

Remembering Sir Henry Parkes
The grave of Sir Henry Parkes and his wife lies in a small cemetery just west of the Prime Minister's Corridor of Oaks. It is the largest monument in the graveyard and includes a plaque which, with great simplicity, sums up his importance in Australian history. 'Sir Henry Parkes, Father of Australian Federation, five times Prime Minister of New South Wales, arrived in Australia July 25, 1839, worked as station-hand, Customs Officer, bone and ivory turner. In 1850 became proprietor of Empire Newspaper. Member of New South Wales Parliament from 1854-1894, Sir Henry Parkes is especially remembered for his efforts to develop New South Wales Education and Railways and his work for Federation earned him his title Father of Federation.' A suitable homage to a remarkable politician.

Bushwalking to the South of Springwood
There are a number of excellent bushwalks in the area. Some are down the valleys to the south of the town; others are to the lookouts over the Jamieson Valley and the Nepean River; and others lie to the north of the Great Western Highway.

Lookouts
Martin's Lookout and Hawkesbury Lookout
An interesting and unusual view over the Blue Mountains National Park (complete with a pleasant and short bushwalk) can be had from Martin's Lookout which lies at the end of Farm Road.

To the north of the Great Western Highway if you follow Hawkesbury Road and turn into Singles Ridge Road, then turn left into Yellow Rock Road you will reach Yellow Rock Lookout which has excellent views of the Sydney basin and the Nepean River below.

If you continue on Hawkesbury Road through Winmalee, rather than turning at Singles Ridge Road, you will eventually reach the Hawkesbury Lookout which offers more views of the Sydney basin, Penrith Lakes and the Nepean River.

Bushwalks in the Area
Fairy Dell
For bushwalkers looking for a pleasant walk with both a lookout and some pleasant scenery the most popular attraction is the Fairy Dell Reserve which is located only one block from the railway station. The walk from Springwood Avenue is 2.7 km, lasts ninety minutes and comes out at Lawson’s Lookout. The walk down the Magdala Gully is memorable for the ferns, native plants and eucalypts. It is interesting that as early as 1882 The Pictorial Guide to the Blue Mountains of New South Wales eulogised: "Going through the grounds at the back of the 'Royal', a beautiful secluded gully will be found with several stretches of flat land, where the thoughtful owner of the hotel has had seats placed, and on hot days this cool retreat is very enjoyable." It is still particularly beautiful. For more information and a good map check out http://www.wildwalks.com/bushwalking-and-hiking-in-nsw/blue-mountains-springwood/lawson-lookout-from-fairy-dell-reserve.html

Sassafras Gully Reserve
Sassafras Gully Reserve on the edge of the Blue Mountains National Park can be accessed from several roads including Davies Avenue, Sassafras Gully Road, Bee Farm Road, Picnic Glen, Burns Road and Farm Road. You can choose from short walks through to long walks. The longest walk is 6.1 km from Springwood via Sassafras Gully to Faulconbridge which uses both the Victoria Track and the Sassafras Gully tracks, stays close to the creeks and is a delightful walk through interesting and changing vegetation. The Victoria Track passes the Clarinda Falls below the Corridor of Oaks. Check out http://www.wildwalks.com/bushwalking-and-hiking-in-nsw/blue-mountains-springwood/faulconbridge-to-springwood-via-sassafras-gully.html for details and a downloadable map.

Valley Heights Locomotive Depot Heritage Museum
The railway came through the area in 1867 and in 1875 a platform at Valley Heights was opened to service the private residence of the Colonial Treasurer, Hon. Geoffrey Eager whose residence was called 'The Valley'. It was initially called Eager's Platform but by 1877 it was available for use by the general public and in 1880 it was renamed Valley Heights. The depot at Valley Heights consisted of a locomotive yard, 10 bay roundhouse, 18 metre (60ft) turntable, an elevated coal stage, water tanks and columns and provided pilot (assistant) engines for trains travelling to Katoomba and beyond. The steam train operation was eventually closed down in 1957 and by 1988 the depot had been closed completely. Today it is a museum in which the exhibits include maps, photographs, historical information about the railway across the mountains, three steam engines and an electric locomotive, a range of rolling stock and a superb model railway. The museum is usually open the second and fourth Sunday of each month between 10.00am and 4.00pm. Check out the details at http://infobluemountains.net.au/locodepot/opening_hours.shtml

* the area had been occupied by the Gundungurra and Dhurak Aboriginal people for an estimated 40,000 years before Europeans arrived.

* The first Europeans in the area were the explorers Blaxland, Wentworth and Lawson who camped near modern-day Springwood on 13 May, 1813. Confirming that they were not the first across the mountains the explorers observed several Aboriginal huts in the area.

* Between 14-18 August, 1814 William Cox established a depot in the area when he was building his road over the mountains.

* Governor Macquarie travelled though on 27 April, 1815 while inspecting the road built over the mountains by William Cox and his convict labourers. Macquarie named the area 'Spring-Wood'.

* In 1816 Governor Macquarie ordered that the military depot be moved from Glenbrook Lagoon to Springwood. These simple barracks were built near the present site of the monument and remained until 1845.

* In 1822 Barron Field crossed the mountains and noted in his diary: "we did not reach Spring Wood (twelve miles and a half from the river), where alone there is space enough in the forest to encamp upon, till after 9 o’clock at night. There is little or no grass here, and the timber consists principally of those species of eucalyptus called by the colonists stringy and ironbark."

* The railway reached Springwood in 1867 and for the next sixty years, at least, it became one of the most popular destinations on the lower Blue Mountains.

* The Prime Ministers Corridor of Trees was started in 1934

* In 1938 the Macquarie Memorial was erected at Springwood by the Royal Australian Historical Society to celebrate the naming of the first town in the Blue Mountains.

* In October, 2013 the area around the town was badly affected by an early bushfire which destroyed 193 properties in the district.

* Today Springwood is a successful community. It is fortunate that it has developed on the south side of the railway and, thus, is separated from the Great Western Road with its continuous heavy traffic.

The website http://www.wildwalks.com/bushwalking-and-hiking-in-nsw/blue-mountains-springwood/ offers a range of walks in the area and http://www.bluemts.com.au/info/towns/springwood/ has useful general information. 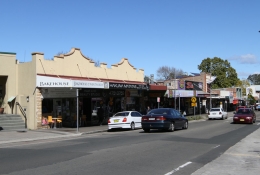 The main street of Springwood. 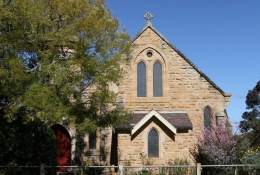 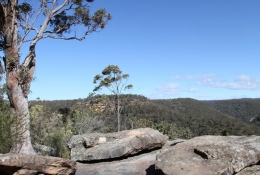 The view from Martins Lookout 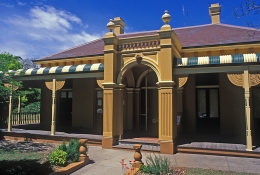 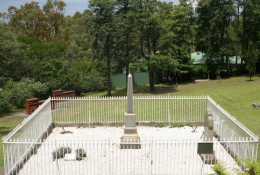 The graves of Sir Henry Parkes and his wife. 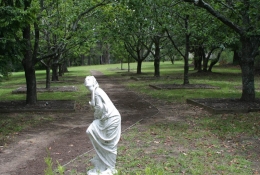 The Prime Ministers Corridor of Trees