St Albans is the perfect day out from Sydney. The instructions to get there are easy: take the road from Sydney north to Wisemans Ferry, cross the river and turn left. The trip usually takes around 90 minutes from the city centre. The final stretch of road is not brilliant but the trip is delightful encompassing two punt trips across the Hawkesbury, a pleasant drive beside the Macdonald River (St Albans is on the upper reaches of the Macdonald), an opportunity to enjoy a quiet drink in an historic pub, some pleasant riverside parks for relaxation, and a true sense of being far removed from the hustle and bustle of the city.

Originally known as Macdonald (after the river on which it is located) the settlement then became the "Town of St Albans" before becoming simply St Albans in 1841. It was named after St Albans, a town in Hertfordshire, England which lies north of London. St Albans was the birthplace of Anne Smith who married Thomas Bailey. Their son, John Bailey, was an early and important local citizen.

Settlers Arms
Located beside the Macdonald River, the delightful Settlers Arms is a sandstone two-storey pub, full of authentic, historic charm, it dates from 1848 (although the pub claims it dates from 1836) when it became a popular watering hole for the cattle drovers taking animals through to the Hunter Valley, the local farmers who came to the jetty to trade and collect supplies, and the riverboat workers who knew St Albans as the limit of navigation. Today the Settlers Arms Inn, remains largely unaltered and is hugely popular on weekends.

St Albans Court House
Located at 19 Upper Macdonald Road, the historic stone Police Court House and Lockup, built in 1890, is now a guest house (check out http://www.courthousestalbans.com.au for bookings). The previous Court House and watch house were washed away in the floods of 1889 with one description recording "On Tuesday the 28th. May [1889] the river rose to 45 feet above the usual level. The Police Station, Stables, Boatshed and all the fencing were washed away. The courthouse was left standing but worked out of position. A great proportion of the Police paddock was washed into the river. Constable Gilbert lost all his furniture and clothing. He had wisely taken the precaution to place all books, papers, etc. belonging to the Police Station and Court House high up in the latter building, but they were removed by the rush of water, and, with the Government and Police Gazettes, were lost." It was replaced by the present building in 1890. Not surprisingly, it was located on the hillside to prevent destruction by future floods.

St Joseph's Catholic Church
Located on St Albans Walk, St Joseph's was converted into a guest house and wedding venue in 2013 and subsequently won the National Trust of New South Wales' best heritage restoration award. The website (http://www.stjosephsguesthouse.com.au/history.html) explains that the building was "originally a Gothic styled Catholic Church to serve the growing community of the Macdonald River valley. It was built from locally quarried sandstone with the Foundation stone being laid in 1839. This makes St Josephs the oldest Catholic church on mainland Australia. The original church was the largest stone structure outside of the Sydney settlement. The funds, materials and labour were supplied by the growing valley population and the project was led by an architect, a stone mason and a builder. The congregation however did not meet the expectations of the local minister and the small flock soon lost their shepherd. Two monks came later and modified the church for use as a monastery."

The Great North Road
On the road from Wisemans Ferry to St Albans the road passes a section of the Old Great North Road. There is a clear sign marking a dirt road through the bush. A sign nearby titled Welcome to the Old Great North Road includes the following information: "The Great North Road, originally traced in 1825 by Heneage Finch and completed in 1836, was constructed using convict labour. It spanned 264 km between Sydney and the settlement of the Hunter Valley. Up to 720 convicts - some in chains - worked on the Road. Evidence of their day-to-day life includes stockade sites, handpicked waterholes, and graffiti engraved into the sandstone." The sign explains that by 1836 the road had been abandoned and that "as a consequence, the 43 km section of the Road located within and adjacent to Dharug and Yengo National Parks, is the only portion that remains undeveloped and relatively intact. This section has been named the Old Great North Road to distinguish it from the remaining modernised sections. It is nationally significant and the three remaining bridges north of the Hawkesbury River are the oldest surviving stone bridges on mainland Australia. The road was closed to motor vehicles in December, 1992." The Great North Road had reached Wisemans Ferry by 1828 but difficulties occurred when it started across the river. Major Mitchell surveyed a new route west of the ferry crossing which was known as the Ten Mile Hollow. Work began in early 1829 and was completed six months later. The road was carved out of solid bedrock. In some places the steep stone retaining walls were up to 12 metres high and supported by massive buttresses. It has been classified by the National Trust.

* The Dharug and Barkinung Aboriginal people, who lived here for 20,000 years before the arrival of Europeans, are the traditional owners of the land.

* The first Europeans to reach the Macdonald River were an expedition led by Governor Arthur Phillip in June, 1789. Phillip named it "The First Branch" and spent two days exploring the area.

* Europeans moved into the Macdonald River valley as early as 1789. These were unofficial settlers including convicts and escapees from Sydney.

* The first official land grants along the Hawkesbury River were allocated in 1794.

* By 1796 there were 400 Europeans living officially along the Hawkesbury. There were probably more unofficial residents particularly in places like St Albans. In 1796 troops moved into the area because the local Aborigines were harassing the settlers. There was strong resistance to European settlement.

* In 1824 the St Albans Common was established along Mogo Creek.

* In 1833 the name of the river changed from "First Branch" to Macdonald - it was named after John Macdonald from Pitt Town, an early settler. This was the year of the first official survey of the land on the banks of the river. The survey showed 86 land holders.

* In 1836 a two storey stone house was built near the river. It would eventually become the Settlers Arms.

* In January, 1841 the village was officially named St Albans.

* The St Albans Wesleyan Church (now a private dwelling) was consecrated in 1902.

* Today the population of St Albans has increased due to small numbers of people finding this quiet village a delightful retreat from city life.

There is an excellent local website. Check out http://www.saintalbans.org.au. 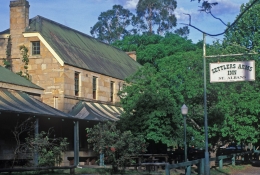 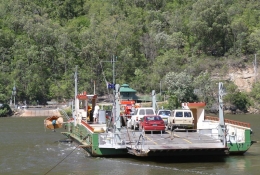 The ferry across the Hawkesbury - turn left to St Albans.