The original, indigenous inhabitants, the Dhurga Aborigines, called the lake (St Georges Basin) 'Bherwherree'. When Captain James Cook sailed up the coast in 1770 he named the cape on the coast, Cape St George. He sailed past the cape on 23 April, 1770 which happened to be St Georges Day. Then when Thomas Florance surveyed the district in June, 1828 he simply adopted Cook's nomenclature and named the settlement St Georges Basin.

Basin View
The Basin View is one of the many low key developments around St Georges Basin. It is located on the north-western shore of the lake. It is known for its pleasant views over the lagoon. It is popular for water sports and is a well-known fishing and sailing spot with a concrete ramp on Basin View Parade providing access to the lagoon.

Sanctuary Point
Sanctuary Point, the second largest town on the shores of St Georges Basin, has two ramps: a ramp for light craft and an all-purpose ramp. There is also a 40 minute Basin Walk which runs from Palm Beach Reserve in a westerly direction around the lake shore and a small promontory to Paradise Beach Reserve. For more information check out http://shoalhavenholidays.com.au/what-to-do-in-shoalhaven/walks-in-the-shoalhaven.

The Geology of St Georges Basin
For a lucid and simple account of the formation of St George Basin and the role played by both the previous Ice Ages and Global Warming refer to http://stgeorgesbasin.info/level2/basin.html. It is detailed and simple.

Booderee Botanic Gardens
Located 15 km south-east of St Georges Basin is Booderee Botanic Gardens, a product of he Commonwealth Government’s decision to excise the “Jervis Bay Territory” from New South Wales. In 1915 the area bounded by Jervis Bay to the north, the coastal cliffs to the east, Wreck Bay to the south and Sussex Inlet and St George’s Basin to the west all became part of the ACT.

In 1995 the Botanic Garden was handed over to the Wreck Bay community, it was renamed Booderee Botanic Gardens, it became jointly managed by the local community and the Director of National Parks and, most significantly, the non-indigenous plants were slowly removed so that now it is a collection of the flora of south eastern Australia’s coastal environment and it is “the only Aboriginal owned botanic gardens in Australia.” The result is a wonderland of flora including lemon-scented tea tree, bottle brush (callistemon), waratah, Gymea lily, orange, pink and yellow flowering gums, cabbage trees, turpentine, blackwood and bloodwood amongst which fauna such as red belly black snakes, diamond pythons, 10,000 pairs of the eastern long-necked turtle in Lake McKenzie (a perched lake in the gardens) and over two hundred species of birds, including crimson rosellas ,rainbow lorikeets,kookaburras, wood ducks  and a satin bowerbirds, live.

Booderee Botanic Garden is being returned to its former indigenous glory. Already there is 3.7km of easily accessible tracks through the wooded landscape, across the open lawns and beside Lake McKenzie. The trails pass the Heath and Woodland Garden which focuses on South Coast flora; the Casuarina Lawn which is particularly popular with the glossy black cockatoo; the Waratah Lawn which is an ideal place for picnics; the Rainforest Gully with its tree ferns and palms; and the Koori Garden which, given the new Aboriginal ownership, is emphasising the bush tucker and bush medicine aspects of the flora.

During the school holidays there is an extensive program of Aboriginal activities for kids including Bush Tucker and Medicines, Aboriginal Tools and Technology, Koori Games, Campfire Yarns, and a Twilight Walk. Check at the Visitor Centre for details. Booderee National Park is open daily according to the time of the year. Entry to the Botanic Gardens is free but it costs $10 per vehicle, $5 concession (pensioners, veterans, disabled) for entry to the park. Tel: (02) 4443 0977, check out http://www.environment.gov.au/parks/booderee.

* Prior to European occupation the area around St Georges Basin was occupied by the Dhurga Aborigines who called the basin 'Bherwherree'.

* The first European to sail past Cape St George was Captain James Cook on 23 April, 1770.

* In June 1828 Thomas Florance surveyed the district and named the lake St Georges Basin which, in turn, was named after Cape St George which had been named by Captain James Cook.

* The first land grant in the St Georges Basin area was to Lieutenant John Lamb who was granted 2,560 acres (1037 ha) on 20 May, 1830 which he named Erowal. The property was managed by David Blair and a number of convicts developed the site.

* In 1841 the surrounding villages were connected by The Wool Road from Nerriga in the Southern Highlands. This track was originally cut by about 70 convicts in ten months at the decree of Governor Gipps in order to take wool, wheat, hides, etc from the Braidwood, Goulburn and Canberra areas to the coast for shipping to Sydney. it passed St Georges Basin and finished at South Huskisson.

* In 1885 Cyril Blacket, the son of the famous architect Edmund Blacket, acquired 640 acres on the north-west corner of St Georges Basin where he built Tasman House.

* Today boating, fishing, swimming and picnicking are popular in this holiday and retirement town.

There is an interesting local website dealing with "Environment and Heritage Interests at St Georges Basin - check out http://stgeorgesbasin.info. 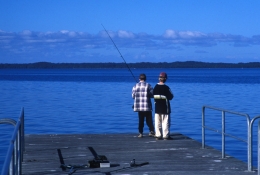 Fishing from the jetty at St Georges Basin. 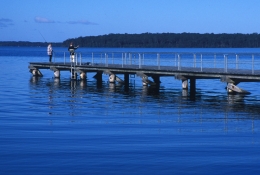 The jetty at St Georges Basin. 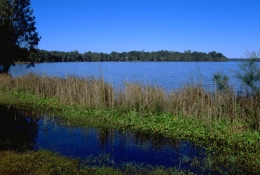 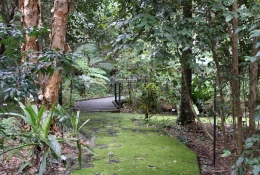