Sleepy town inland from the coast of north-east Tasmania

St Marys is a tiny town only 10 km from the island's east coast and nestled under the impressive St Patrick's Head, the most prominent rocky outcrop in the district. It is an area characterised by dramatic vistas, pleasant bushwalking and interesting, rugged terrain, particularly in the Douglas-Apsley National Park.

St Marys (it has never had an apostrophe) was named by an early settler, Francis Groom, after St Marys Church at Harefield in England. Groom had settled near Break O'Day River around 1837-1838 and called his property Harefield. When the village began to develop he called it St Marys. The name was also given to the St Marys Pass which was constructed from the settlement to the Port of Falmouth.

Christ Church
Located in the middle of paddocks about three kilometres west of St Marys, Christ Church was built in 1847 as part of the large property, 'Cullenswood', which had been built by Robert Vincent Legge in 1845 and located on Cornwall Road off the Esk Highway. Cullenswood, which is not open for inspection, is a handsome two storey rubblestone Georgian building with a columned veranda and iron-hipped roof.

St Marys Cranks & Tinkerers
Maybe all museums where there are active volunteers should be called "cranks and tinkerers". Certainly the museum at St Marys makes no apologies and are happy to declare their interest in "a display of interesting things from 50 year old cars, motor bikes, buggies, model planes and boats, bottles, books, cameras and the list goes on. If you are lucky Ian will play you a knee slapping tune on his banjo or you might be treated to a visitor playing the double bass which is all very normal in this building of wonderful objects." It is located at the Old St Marys Railway Station and is open all day Monday, Tuesday morning, Thursday 10am to 3pm, Friday morning, Saturday all day and Sunday 2pm to 5pm. Check it out at http://tasmanianhistorygroups.edublogs.org/st-marys-cranks-tinkerers/

St Marys Hotel
The most prominent, and dominant, building in town is the St Marys Hotel (1916) which stands at the crossroads and represents a time when the town was much more prosperous and when there were 50 dairy farms in the district and two cheese factories in the town. It is worth noting that previous hotels had stood on this site but, being built of timber, they were destroyed by fire.

St Patricks Head
St Patricks Head, which is 683 m above sea level, lies to the east of St Marys via Irishtown Road. The walking track around the southern side of the head is not easy (Parks Tasmania recommend it for physically fit people with bushwalking experience) but the view is panoramic and well worth the effort. It will take around two to three hours return. For more details check out http://www.parks.tas.gov.au/file.aspx?id=19218.

South Sister Mountain Lookout
To reach South Sister Mountain Lookout take the Germantown Road, wind up the mountain for 5 km and turn at the South Sisters Lookout signpost. The lookout provides panoramic views of the surrounding coast and countryside and the walk to the lookout is much easier than the difficult climb up St Patricks Head. There is detailed information at http://www.southsister.org/articles1/tourism.htm

Coalminers' Heritage Wall
Located at Cornwall, 7 km north-west of St Marys, this wall commemorates the miners who helped to make the Fingal Valley one of Tasmania's richest and most productive mining areas during the 19th century. The wall recalls the coal miners (many from Cornwall) who tunnelled  into the Mt. Nicholas Range with only a pick, shovel and a stick of dynamite and helped create an industry that would make the Fingal Valley prosperous for a hundred and twenty four years.

* Prior to European settlement the St Marys area was inhabited by the Pyemmairrener Aboriginal people who had lived there for thousands of years.

* In 1837-1838 Francis Groom arrived in the area and established a property named Harefield near the Break O'Day River. He would go on to name the village St Marys after the church in Harefield in England.

* It wasn't until the 1840s that a probation station, housing 300 convicts, was built at Grassy Bottom between the town and St Mary's Pass. The convicts built the road across the mountains to the east coast between 1843 and 1846.

* In 1855 twenty German families, all of whom had emigrated to Tasmania on a ship named America, settled in the area.

* The arrival of the railway from Fingal in 1886 led to town's increasing importance as a service centre.

* The Elephant Pass route was completed in 1888 and this resulted in goods moving across the mountains to the east coast settlements of Bicheno and Chain of Lagoons.

* Today the area has been given over to wool and meat and the town's population is mainly timber workers, coal miners and alternative lifestylers.

There is a good, detailed history of the town and the district at http://www.fingalvalleyhistory.com/St%20Marys.htm 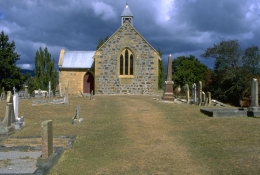 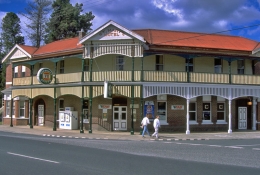