Holiday destination on the Yorke Peninsula.

Most of the coastal towns on the Yorke Peninsula have a distinctively holiday ambience. Typically they are characterised by temporary houses ("shacks" as the South Australians like to call them) and a pleasant, laidback, summery feel. Stansbury is different. There are stands of Norfolk pine which give the town a settled appearance. Add to that solid, long established residences and it becomes a coastal town quite unlike most of the others on the peninsula. Today Stansbury is a quiet, holiday destination with the calm waters of Oyster Bay being ideal for swimming, water skiing and windsurfing. It is also sufficiently substantial to operate as an important service centre for the surrounding rural district.

Stansbury is located 206 km west of Adelaide via the Princes Highway and Yorke Highway. Wool Bay is 12 km further down the coast.

How would you like to have a town named after you? All you need is a governor as a friend. Stansbury was originally named Oyster Bay because, not surprisingly, there were excellent oyster beds in the district. Then Governor Sir Anthony Musgrave (he was Governor of South Australia - 1873-1877) suggested the town be renamed Stansbury after a friend whom we only know as Mr Stansbury.

Stansbury Museum
Once known as Dalrymple House, the Stansbury Museum was completed in 1878 and was originally the old school house. It was opened as a museum in 1976. Located at North Terrace, it is now a museum which is open on Sundays and Wednesdays between 2.00 pm - 4.00 pm and daily in January at the same time. It has a number of outbuildings with local farm equipment and the original schoolroom has a lot of interesting educational memorabilia. The website - see http://www.stansburymuseum.com - points out that the volunteers are "proud of our oyster dredge, wallaby skin coat, wool hand shears with grooved grip and a roller mill designed & constructed by local farmer and hired around the district." That wallaby skin coat is a unique artefact. For more information contact 0408 142 875.

Old Post Office Building
The Southern Yorke Peninsula Visitor Information Centre, on the corner of Weaver and Towler Streets, is housed in the Old Post Office building which was completed in 1877 and ceased to operate as a post office in 1984. During the life of the post office the mail was brought to the town firstly by steamer and later on the buses from Adelaide.

Stansbury Jetty
The Stansbury jetty was completed as recently as 1905. It was never used by windjammers. Wheat was pulled along the 300 metre long jetty by horse and loaded aboard small ketches (sometimes called lighters) and taken across to Port Adelaide. Bags of grain were stacked on the shore at the end of the jetty. They were also stacked at the top of the cliffs and lowered to waiting trucks which conveyed them along the jetty to the lighters. By 1910 there was a twice weekly service carrying passengers, mail and general goods and by 1914 the limestone from the cliffs was being shipped across Gulf St Vincent to the Adelaide Cement Company. The jetty ceased operation in 1960.

Stansbury Township Walking Trail
The trail runs along the shoreline for 6.3 km from the jetty to Pitts Cutting which is south of the town. There is informative signage along the way and from Pitts Cutting lookout it is possible to see across Gulf St Vincent to the Adelaide Hills. There are a number of different bird species in the area - expect to see Black Swans and Pelicans and many more which are identified on the signs.

Wool Bay and the Wool Bay Lime Kiln
Wool Bay is a tiny coastal settlement 12 km south of Stansbury. With a floating pontoon and safe beaches it is ideal for family holidays. The real interest in the town lies in the remarkable Wool Bay Lime Kiln which stands on the hill above the town's jetty. A sign on the kiln reads: "The Wool Bay Lime Kiln was built between 1900-1910 and was used for burning lime. Lime production was a significant industry on the Yorke Peninsula from the turn of the century to the 1950s. A number of kilns were built around Stansbury and Wool Bay to burn the lime. The lime was mainly exported to Adelaide for use as building mortar. Limestone was readily available in the area and tea tree, cleared to open farm land, was used as fuel. While many kilns were changed to oil burning, the Wool Bay kiln was a draw kiln using wood, and was not converted. Due to the cliff top location, variation in wind conditions caused problems. This kiln was not a great success, but is one of a few still in reasonable condition and represents the past lime industry of the Yorke Peninsula. The lime industry declined in the 1950s largely due to competition from hydrated lime imported from Melbourne."

Wool Bay was founded in 1876 to export lime, wood and wheat across Gulf St Vincent. The jetty was built in 1882 and, amusingly, because the jetty was wide enough to roll a bale of wool along its length, the name of the town, which was Pickering, was changed to Wool Bay. Nothing like the bleeding obvious.

* Prior to European settlement the area around Stansbury had been inhabited by the Narangga Aborigines for thousands of years. Their lands spread across the entire Yorke Peninsula. In the Stansbury area the Narangga lived mainly on oysters and fish.

* The pastoralist, Alfred Weaver, arrived in the area in 1846 having acquired over 13,000 ha of land. He brought 7,000 sheep with him but problems with disease, reliability of water, bushrangers and the Narangga people resulted in him selling up in 1848.

* By the 1870s the town had evolved as a ketch port with grain being brought to the coast where it was loaded on ketches and shipped across Gulf St Vincent to Port Adelaide.

* In 1877 the Stansbury District Council was established and the first Stansbury jetty, which was over 300 metres long, was constructed at a cost of £3,750.

* In 1878 the local schoolhouse was completed and opened.

* By 1914 limestone was being mined near the town and shipped to the Adelaide Cement Works.

* Today the town is both a service centre for the surrounding farmers and a family holiday destination during the summer months.

There's a useful local website which is worth checking out http://www.stansburysa.com and Wool Bay is covered at http://www.southaustralia.com/info.aspx?id=9006430 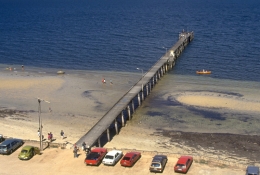 Wool Bay jetty from the lookout at the Wool Bay Lime Kilns (pic: 1989) 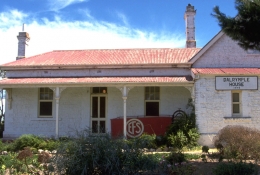 The Stanbury Museum as it looked in 1989.