Quiet village north of Wollongong and south of the Royal National Park.

Stanwell Park is a quiet, bushland village (there are very few shops) nestled in a narrow valley where the Illawarra escarpment drops down to the sea. Located at the southern end of the Royal National Park and the northern end of Wollongong's northern suburban sprawl it is unlike most of the other northern suburb/villages. There is a sense of privacy, of isolation and of peacefulness which makes it quite different from, say, Thirroul or Austinmer. It has become a popular destination for hang gliding with practitioners launching themselves from Stanwell Tops, riding the thermals and arriving on the beach. The views south from Stanwell Tops are some of the best to be found along any coastline in Australia.

Stanwell Park is located 58 km south of Sydney via the Princes Highway (M1, F6) turning off to the coast from the F6 at Helensburgh.

It is uncertain where the first European landholder in the area, Matthew John Gibbons, got the name but when he established a farm in the district in 1824 he named it Stanwell Park and that was subsequently adopted for this northernmost section of his land.

Bald Hill and the Lawrence Hargrave Monument
Bald Hill offers one of the great views of anywhere on the New South Wales coast and certainly the best view on the state's South Coast. It draws crowds each weekend and often there are hang glider enthusiasts who leap off and catch the thermals so they circle and circle until they land on or near Stanwell Park beach.

It was from Bald Hill that Lawrence Hargrave carried out his box kite experiments which was critical in the development of aircraft. He is recalled both in the main road through the towns - Lawrence Hargrave Drive - and on a plinth with the inscription:

'Lawrence Hargrave - 1850-1915 whose pioneering research in aeronautics with engines, monoplanes and box-kites, much of which was carried out at Stanwell Park, played a vital part in the development of the aeroplane'.

It is hard to describe a view which looks down the coast all the way to Wollongong and Port Kembla. Let's just say that it really does take the breath away.

Intabane
At the top of the hill before the descent into Stanwell Park is an exotic mansion named Intabane which can be instantly distinguished by its witch’s hat roof. Now a private home it was used as an army lookout during World War II. It was originally built in 1917 for £3000 and became a guest house between the wars.

Bushwalking
The Wollongong Visitor Information Centre has a useful A4 brochure titled Illawarra Escarpment State Conservation Area Walking Tracks. There is also an excellent book, Best Bush, Coast & Village Walks of the Illawarra by Gillian and John Souter which they sell. Both recommend, and provide details and maps for, the Wodi Wodi Track, the Forest Track and the Princess Marina Walk.

(1) Wodi Wodi Track - is a medium difficulty (exacerbated by the fact that the walk is not used regularly and can be overgrown), 3 hour walk. It is a 7.7 km circuit which starts and finishes on the western side of Stanwell Park Railway station. It passes through rainforest and blackbutt forests and around the edge of the amphitheatre that is Stanwell Creek. It also offers excellent views of of the 65 m high Stanwell Creek railway viaduct.

(2) Forest Track is 6 km one way, of medium difficulty and takes around 2.5 hours.

(3) Princess Marina Walk is a 2.5 km circuit, is rated easy, starts at Stanwell Park Station and takes in the 48 m Kelly's Falls. It is a botanical delight with Gymea lillies, angophoras, grass trees and smooth-barked apples along the way.

Hindu Temple at Helensburgh
The Sri Venkateswara temple at Helensburgh (it is clearly signposted off the Grand Pacific Drive before you reach Bald Hill) is open between 9.00am and 7.00pm every day and closed between noon and 4.00pm on weekdays. Everyone is welcome with the only restrictions being that you remove your shoes before entering. This really is a fascinating and incongruous (you don't expect to see a Hindu temple surrounded by eucalypts) piece of Hinduism in the Australian bush. The large, white building is surrounded by statues of praying Gods with animal heads and gleaming statues of human-like creatures with more than the usual numbers of arms. It is a wonderful monument to multiculturalism. It was designed by Indian architect Janakiramana Sthapati whose family have been temple architects since the sixth century.

Symbio Wildlife Park
Located on Lawrence Hargrave Drive (Grand Pacific Drive) on the way from the Princes Motorway to Bald Hill is Symbio Wildlife Park. The focus of the "zoo" is Australian animals and consequently there are special areas for kangaroos, crocodiles, Australian birds, kookaburras, Tasmanian devils, wombats and dingoes and visitors can cuddle koalas, hand-feed and pat kangaroos and emus, and be amused by the cockatoos. It is also child friendly with opportunities to bottle-freed goats and an area for mini ponies. Equally important however are the zoo's international visitors - Sumatran tigers, spider monkeys, red pandas, marmosets, llamas, alpacas and meerkats. There is a cafe, a souvenir shop, a swimming pool, picnic area and gas barbecues. It is a family-orientated wildlife park. A recent addition has been the 'Behind the Scenes' encounters with red pandas, koalas, dingoes and meerkats. The Wildlife Park is open from 9.30am to 5.00 pm daily. Check http://symbiozoo.com.au/ for prices or tel: (02) 4294 1244.

* Prior to European settlement the Illawarra had been occupied by the Wodi Wodi people of the Dharawal or Tharawal Aboriginal language group for at least 20,000 years. They roamed across the narrow coastal plain, ate fish and crustaceans they caught in the rock pools and lived an idyllic life beside the sea.

* In August 1797 George Bass sought Governor Hunter's permission to take two of the three survivors from the Sydney Cove and return to the Illawarra to investigate the survivor's reports of coal in the area. He set out in Governor Hunter's whaleboat, passed the cliffs of Royal National Park, and discovered coal just south of Stanwell Park at what is now known as Coalcliff. The journey lasted only eight days.

* There is evidence that Governor Lachlan Macquarie reached Bald Hill in 1822 and described the view in the following glowing terms: "On our arrival at the summit of the mountain, we were gratified with a very magnificent bird's eye view of the ocean, the 5 Islands, and of the greater part of the low country of Illawarra ... After feasting our eyes with this grand prospect, we commenced descending the mountain ... The whole face ... is clothed with the largest and finest forest trees I have ever seen in the colony.'

* The first house at Stanwell Park was built by the explorer, Sir Thomas Mitchell.

* Stanwell Park grew as a village with the arrival of the railway from Sydney in 1890 but this section of the track was always problematic with the 145 m long curved viaduct over Stanwell Creek Gorge being built in 1920 when subsidence along the old route dictated the construction of a new track higher up the mountain. Standing 65 m above a creek bed surrounded by profuse rainforest vegetation and containing an estimated three million bricks, it is reputedly the largest railway viaduct in Australia.

* In 1893 Lawrence Hargrave moved to Hillcrest House (now the caretaker's house for a local retirement village) which he had inherited from his brother, Ralph Hargrave. It was at Stanwell Park and Stanwell Tops that Lawrence Hargrave, the inventor of the box kite and one of the founding fathers of modern aviation, carried out many of his aviation experiments. Hillcrest House is located on the road up to the Stanwell Park Railway Station. Hargrave was hugely important in the development of heavier-than-air flight. On Stanwell Park beach in 1894, Lawrence was lifted five metres off the ground in a series of box kites tied together with rope. The following year he designed a powered machine, but it wasn’t powerful enough to fly. This was eight years before the  Wright Brothers made the world’s first controlled flight in a powered machine.

* In 1985 the Sri Venkateswara temple was opened. It was the first Hindu temple in Australia.

The Wollongong region has two major visitor information centres. The first is located at Bulli Tops just off the Princes Motorway, is known as the Southern Gateway Centre and can be accessed by either going to http://www.southerngatewaycentre.com.au/ or tel: 1800 240 737. The second, known as the iHub Centre is at 93 Crown Street and can be accessed by going to http://www.visitwollongong.com.au/ or tel: (02) 4267 5910. Both these information centres can help with information about Stanwell Park.

There is a local business directory site with some history of the region. Check out http://stanwellpark.net.au/ 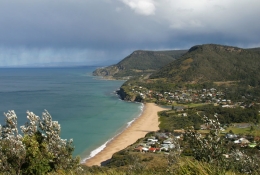 View from Stanwell Tops with storm over Wollongong. 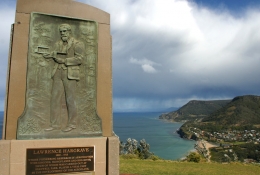 The monument to Lawrence Hargrave at Stanwell Tops. 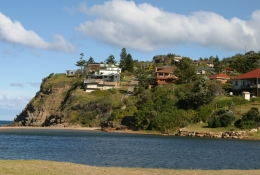 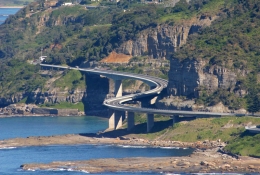 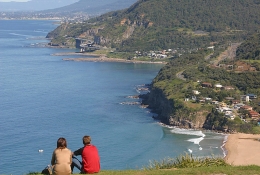 The view down the coast towards Wollongong from Stanwell Tops.