Steiglitz, the first auriferous quartz mining site in Victoria, is a well-preserved gold mining town - "almost a ghost town" - which is now an Historic Park administered and maintained by Parks Victoria. The appeal of the Historic Park is that it is held in aspic. The visitor can see important buildings, ruins, mines and other historic artifacts while the five walks around the Park are through bushland noted for its remnants of the gold mining era as well as significant fauna and flora and the importance of its fossils. If you are planning a visit to the "historical experience" that is Sovereign Hill in Ballarat this is a "real" complementary experience. A gold town which has died. Heritage Consultant, Jane Lennon, has pointed out that Steiglitz was set up so people who have visited Sovereign Hill could appreciate the subtleties of the real thing – “the skeleton of a town where the visitors have to use their imagination to see the busy streets, the noisy quartz-crushing machines and the diggers working in the creeks.”

Steiglitz is located 91 km west of Melbourne on the edge of Brisbane Ranges National Park. It is 40 km north of Geelong and 54 km south-east of Ballarat.

The town is named (with incorrect spelling) Steiglitz after the first European settlers, the sons of a Bohemian baron, Charles and Robert von Stieglitz who arrived in the district in 1842.

Courthouse and the Self-Guided Walk
Completed and opened in June, 1875 for a contract price of £1600 this slate-roofed red brick courthouse was built when Steiglitz was a flourishing gold town. It is nearly identical to the Court Houses built in Ballan and Lilydale. All were constructed by the contractor, Thomas Watt. The gold was so unreliable that the population declined and the court house was closed in January, 1879. It was reopened in 1895 during renewed mining activities but it ceased operations in 1899. Parks Victoria took control of the building in 1977. It is now a museum with a display of photographs, maps and relics which is open Sundays from 1.00 pm. to 4.00 pm. It is run by volunteers so sometimes it does not open. The museum has a pamphlet which outlines a self-guided 45-minute walk which identifies the remains of the town. If the courthouse is closed there should be a pamphlet in the information box. Otherwise it can be downloaded at http://parkweb.vic.gov.au/__data/assets/pdf_file/0006/603537/Map-Stieglitz-Historic-Park.pdf. There is also extensive signage near the Car Park which indicates the historic route around the town.

Historic Buildings
There are a small number of remnants of the historic buildings that formed the nucleus of the gold mining town. There is Scott's Hotel (circa 1890s), a post office and general store (1865), a weatherboard cottage, some building foundations, some old streets, shafts and tailings, an old cemetery which opened in 1861 and is still used, but the most complete buildings are the Church of England and Roman Catholic Churches and the Court House. There was once more than 300 buildings in the town and the main mine was located behind the general store and Catholic Church

St Paul's Anglican Church
St Paul's Church of England Is a modest timber structure which dates from the time when the town was booming and the population was around 2,000 people. It was consecrated in 1871 by the Dean of Melbourne and continued to operate until 1962. The exterior was restored in 1988 and the interior in 1994. Behind it is a very modern toilet block.

St Thomas' Catholic Church
This simple wooden church was built in 1868-1869. Amusingly this modest timber church was moved to Plume Street, Norlane in 1951 where it was used as a church hall. It was returned to Steiglitz in December, 1982 when there was a scheme devised to protect the small township. There is a solitary grave in the churchyard. Today the church is home to the Steiglitz Historical Society. For more information check out http://www.steiglitz.com.au.

Historic Cairn
The cairn near the bridge is made of stone from the original Von Stieglitz homestead. It was near this site that William Hooley and Joseph Davis discovered the gold reef which, in 1855, led to the gold rush which produced the town.

Panning for Gold
The geology of the area is described as "Ordovician sediments typified by a thick bed of slates ... these sediments are folded and contain gold in quartz reefs associated with granite intrusions". It is possible to pan for gold in the section on Sutherlands Creek one kilometre downstream from the Meredith Road Bridge. You have to have a "current Miner's Right and can use pans, cradles and hand tools within the creek bed only."

Walks Around the Historic Park
There are five walks in the area surrounding the Steiglitz township.

(1) Steiglitz Circuit Walk - a self-guided 45-minute walk from the Court House which identifies the remains of the town and passes Gibraltar Mine and shares a section with the Deadmans Loop. If the courthouse is closed there should be a pamphlet in the information box. Otherwise it can be downloaded at http://parkweb.vic.gov.au/__data/assets/pdf_file/0006/603537/Map-Stieglitz-Historic-Park.pdf.

(2) Deadmans Loop - is a challenging 5.4 km, 1 hour, 45 minutes walk along the creek bed, through the bushland and past St Thomas's Catholic Church. It is described in detail at http://parkweb.vic.gov.au/explore/parks/steiglitz-historic-park/things-to-do/walks-from-steiglitz-courthouse.

(3) Beards Gully Walk - is a difficult 6 km walk which can take six hours. It passes old mine shafts and involves some steep climbs. The walk is described in great detail at http://parkweb.vic.gov.au/explore/parks/steiglitz-historic-park/things-to-do/walks-from-steiglitz-courthouse.

(4) Native Youth Walk - heads towards Kinglock Mine from the Court House and is an extension of the Steiglitz Circuit Walk.

(5) Grahams Creek Walk - is an extension of the Steiglitz Circuit Walk. Itis a loop from the Crossing Picnic Ground through bushland to Grahams Creek Picnic Area.

* Prior to European settlement the Kurong people, from the Wathaurong Aboriginal language group, had lived in the area for around 40,000 years.

* The first European settlers in the district were the squatters Charles Augustus and Robert von Stieiglitz, sons of a Bohemian baron, who leased Durdidwarrah Run in 1842.

* The von Stieiglitz family had left Durdidwarrah Run when alluvial gold was found on the property in 1853 by a squatter Andrew Love, the son of Geelong's first resident clergyman, and a carter named George Morton. Only a couple of hundred miners arrived.

* The gold rush in the district did not occur until a rich reef was discovered by Joseph Davis and William Hooley on Sutherland Creek in 1855. There were soon 2000 people on-site.

* By 1856 alluvial mining had ceased and quartz-crushing batteries were hard at work. It was believed that this was the richest quartz reef in Australia at the time.

* The population declined in the late 1850s but mechanised mining in the 1860s reinvigorated interest and profits. Quartz reefs were exploited in the 1860s and 1870s.

* By 1875 the town was sufficiently prosperous to justify the construction of the handsome slate-roofed red brick court house.

* Returns from the mines declined in the late 1870s and people left.

* By the 1880s there were no Aboriginal people left in the area.

* Mining started again in the 1890s however returns proved disappointing and commercial activity was already in decline by 1896.

* Many of the buildings were sold off and the Court House was closed in 1899.

* The National Parks Service took control of the courthouse in 1977 and has since bought over half of the land on which Steiglitz stood, preserving the relics that remain.

* Steiglitz Historic Park was proclaimed in 1979.

* Today Steiglitz Historic Park covers 469 ha in the Brisbane Ranges and is an important example of what happens to a thriving town when the gold runs out. The current population is less than 20 people.

Parks Victoria has a very comprehensive website with a number of important downloads - see http://parkweb.vic.gov.au/explore/parks/steiglitz-historic-park for details. 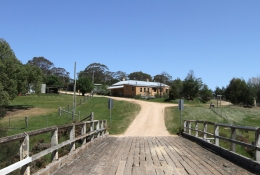 Scott's Hotel (now a private home) and the bridge across Sutherland's Creek. 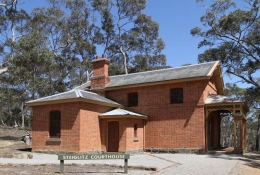 The elegant and simple Steiglitz Courthouse (1875). 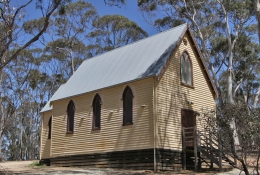 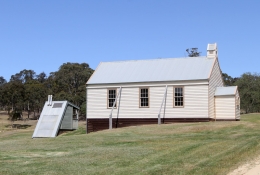 The wonderful incogruity of a state of the art toilet block behind St Paul's Church of England which was consecrated in 1871. 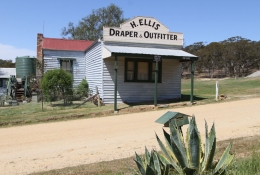 The one shop left in town - now a private home. 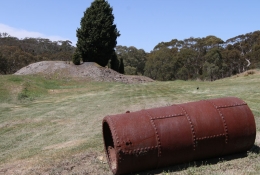 Rusting machinery and a mullock heap - all that is left of the mines. 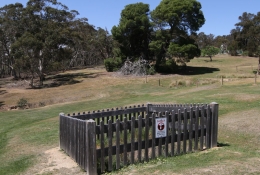 There are still old mine shafts in the area.