Sleepy coastal town and "suburb" to the north of Newcastle.

Although it is only five minutes from Newcastle by ferry, Stockton has a unique character and an intriguing history which is far removed from the nearby bustling steel city. Stockton's glorious long beach which stretches 33 km to the north - all the way to Port Stephens - makes this "northern suburb" of Newcastle a superb hideaway for holidaymakers. It is a fisherman's paradise with the Hunter River, Stockton Beach, Newcastle Harbour and deep sea fishing all being ideal fishing grounds. In many ways Stockton is a sleepy, old fashioned seaside town with a mix of 19th century cottages and elegant newer houses. The main street and shopping centre are unpretentious. The beach cafe is classy and the open parklands are ideal for relaxation and picnics. It is a hidden gem.

Stockton, just north of Newcastle, is located 179 km north of Sydney via the Sydney-Newcastle freeway. It is only 2 km (only five minutes by ferry) from the Newcastle CBD but, by road, it is 20 km via Mayfield, Kooragan and the Tourle and Nelson Bay bridges.

The local Worimi Aborigines knew Stockton as 'burrinbingon'. It was a popular destination because of the rich supplies of fish, pippies and oysters.

Cycling around Stockton
It is hard to imagine a better place to cycle by the sea than Stockton. There are numerous designated cycleways, the area is beautifully flat, and the changing scenery from the Breakwater to views across to Newcastle's CBD to pleasant journeys along the banks of the Hunter River is ideal for everyone from the committed cyclist to family holidays.

The Shipwreck Walk and Stockton's Maritime History
Stockton is a maritime suburb. The Shipwreck Walk runs along the foreshore in both directions from the ferry terminal. Heading up river it reaches the Ballast Ground where sailing ships deposited their ballast before loading up at the port. Towards Stockton Beach it heads towards Pirate Point and out on the Shipwreck Walk Breakwater where the hulks of visible wrecks have been incorporated into the structure. Across the water it is easy to identify Nobbys Head and the lighthouse.

Birdwatching at Stockton
Located north of Stockton Bridge, this is possibly the best area in New South Wales to view large numbers of migratory wading birds. It is part of Kooragang Nature Reserve, a designated "Ramsar" site for its significance for migratory wading birds. Kooragang Wetland Rehabilitation Project and the New South Wales National Parks and Wildlife Service manage the site. Some 34 species of migratory waders flock to the Hunter estuary in their hundreds and thousands between October and April. They include Pacific golden plover, eastern curlew, common greenshank, marsh sandpiper, Terek sandpiper, bar-tailed godwit, black-tailed godwit, red knot, red-necked stint, sharp-tailed sandpiper and curlew sandpiper. Two species of migratory tern, the white winged tern and common tern also occur at Kooragang Island. They build up fat reserves, eating delicacies found on and in mudflats of Fullerton Cove at low tide. At high tide they roost on nearby high ground, particularly along the Stockton dykes and sand spit conserving energy for the long flight north to Siberia and northern Asia. There is an excellent, downloadable brochure - http://www.hcr.cma.nsw.gov.au/kooragang/KWRP_information_brochure.pdf - which focuses on the Kooragang Wetlands on Ash Island and the Kooragang Wetlands Information Centre. There are a number of walks through the wetlands all of which can start at the Information Centre.

Heritage Buildings
There is little to appeal to those interested in historic buildings with the notable exceptions of the slipway and boat harbour opposite the Boatrowers Hotel at 130 Fullerton Road; the old Police Station which dates from around 1882; St Pauls Church and old Rectory at 34a Maitland Street; and the gracious "The Laurels", located at 46 Fullerton Street on the corner of King Street, which was built by William Quigley in 1897. The architect was Ralph Snowball who was also a brilliant early photographer of Newcastle and the district. Check out https://www.flickr.com/photos/uon/sets/72157608912691810/

Stockton Beach and Tin City
Stockton Beach is one of the state's little known wonders. It stretches from the breakwater at the mouth of the Hunter River for 33 km up the coast to Port Stephens. With the largest sand dunes in the Southern Hemisphere (and they really are massive), Stockton Beach is a popular spot for sand board riding and 4WD tours. The arc of the beach is tempting to visitors who want to walk and walk. Among the sand dunes is the famous Tin City, reputedly built as a base for shipwrecked sailors although some believe that the shacks were built by homeless men during the 1930s Depression. The easiest way to access this remarkable collection of eleven buildings is to drive along Stockton Beach. This can only be achieved in a 4WD. Tin City was used to shoot a number of scenes in the 1979 movie Mad Max. The houses have no power, no water and no sewerage. They are also prone to being covered by the shifting sands of the area. Writing about the place for the Newcastle Herald, Tim Elliot observed: "Then there's the sea. Erosion of the frontal dune has become so bad that when the tide is high and surf big, waves rush up and into the huts.
"All of this is, of course, part of Tin City's charm. It's not just surreal, it's post-apocalyptically surreal, from the half-buried shacks and the wind that goes shooshooshoooo in your ear to the Sahara-like dunes that tower over the shacks to the west, dunes so gargantuan that when the photographer and I start walking up them in order to 'get some perspective' we give up after 20 minutes, having only ascended one quarter of their height.
"These dunes have secrets. One day in the 1980s, [one of the residents] found the half-buried skeleton of an Aboriginal girl. There are also ancient Aboriginal middens, dotted throughout the sandy swales, white shoals of sun-bleached shells periodically uncovered by the wind. Some of them date back 1200 years. Then, a jet fighter will scream overhead, on a training run from nearby Williamtown air force base." Check out http://www.theherald.com.au/story/2013518/welcome-to-tin-city-stockton/ for the full story. If you want to see what the dunes actually look like check out http://www.worimiconservationlands.com/ which has a 3 minute video which explains the connection of the Woremi people with the land and shows the scale of the dunes. There is also a useful, downloadable map of the beach. It shows that access to the beach can be had at Lavis Lane off Cabbage Tree Road and Gan Gan Road off Nelson Bay Road.

Fishing
Stockton, which is strategically located on a peninsula at the mouth of the Hunter River, is a fisherman's paradise with the Hunter River, Stockton Beach, Newcastle Harbour and deep sea fishing all being easily accessible. It is regarded by many anglers as one of the best fishing areas in New South Wales. Certainly the small number of men who live at Tin City manage to eke a reliable food supply from fishing in the ocean.

* Prior to the arrival of Europeans the area around Stockton was inhabited by Worimi Aborigines who called the place "Burrinbingon" and lived off a rich harvest of oysters, pippies and fish which is evidenced by the large number of middens in the area.

* In 1797 Lieutenant John Shortland, who had travelled up the coast from Sydney searching for escaped convicts, discovered the Coal River and came ashore at the present site of Stockton.

* By 1799 a saw pit was operating at Stockton and timber was being shipped to Sydney.

* By 1800 the Stockton peninsula was officially known as Pirate Point. This continued until 1862.

* As Newcastle grew Stockton became a northern industrial suburb. By 1838 there were lime kilns, salt works and a foundry on the peninsula.

* A tin smelter and a textile factory were opened in 1872. Several shipbuilders and slipways were constructed along the river.

* The Stockton Coal Company was fully operational by 1886.

* In 1898 the Stockton mine disaster resulted in the deaths of eleven men. The tragedy is commemorated by the Memorial Gates at Lynn Oval.

* The Adolphe was wrecked on Stockton Beach in 1904. The wreck is still visible on the breakwater.

* From the late 1800s to the early 1900s sailing ships tied up on the Hunter River bank near Stockton . If they were carrying ballast they would unload it. The area is now known as the "Ballast Ground".

* In 1951 the Stockton Cottage Hospital closed down. The building still stands on the corner of Monmouth and Mitchell Streets.

The Newcastle website - http://www.visitnewcastle.com.au/pages/nature - has useful information on the Stockton sand dunes and Kooragang wetlands. 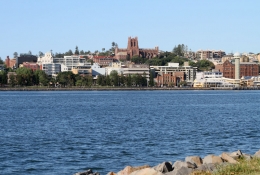 Looking across the Hunter River from Griffith Park, Stockton to Newcastle with the wharves in the foreground and Christ Church Anglican Cathedral on the skyline. 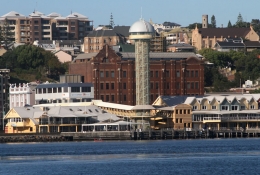 The view across the Hunter River from Stockton to Newcastle's new wharf area. 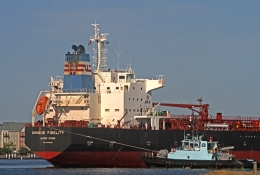 A tug manoeuvres the Unique Fidelity into Newcastle Harbour as seen from the shoreline at Stockton. 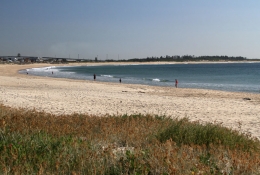 The graceful arc of Stockton Beach with the bridge in the background. 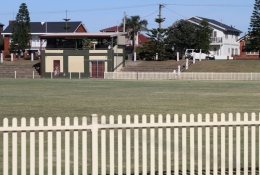 Lynn Oval where the memorial to the 1898 Stockton Mining Disaster is located. 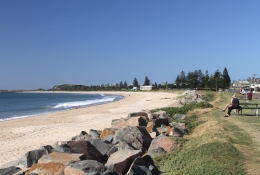 The view along Stockton Beach. 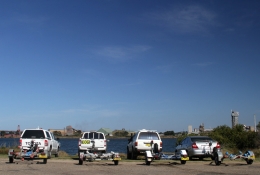 Fishing is as popular in the Hunter River as it is from Stockton Beach. 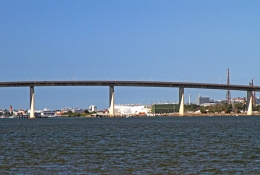 The Stockton Bridge with Newcastle in the background.