Strathmerton is a small rural service centre which is located on the Goulburn Valley Highway near the Victoria-New South Wales state border. It lies at the heart of a rich dairy industry. Over 30% of the district's population are either dairy farmers or people working in the dairy industry and the largest business in town is the Bega Cheese factory - once the Kraft Cheese factory.

Strathmerton is located 248 km north of Melbourne via Seymour and Shepparton south of the Murray River and the Victoria-New South Wales border.

Benjamin Boyd, who was one of the earliest landowners in the district, initially named his property 'Ulupna'. He later changed it to Strathmerton from 'Merton', the name of his family home in Scotland, and 'strath', a Gaelic word meaning 'valley'.

Cactus Country
Located at 4986 Murray Valley Highway (less than two kilometres east of the town) is the largest landscaped cacti garden in Australia. The garden proudly proclaims that it has over "4,000 species of cacti and succulents from around the globe." Spread across 4 ha it has eight different trails through the gardens, plant sales, a Mexican cafe and a gift shop. It is open daily from 9.00 am to 5.00 pm, tel: 0427 745 271. For more information check out http://cactuscountry.com.au.

The Big Strawberry
Located at 7034 Goulburn Valley Highway, Koonoomoo, the Big Strawberry (one of the country's newer "big things") is an excuse to be photographed beside a big strawberry and to indulge, totally and absolutely, in strawberry jams and condiments, strawberry wines and liqueurs, tea with scones and strawberry jam, strawberry milkshakes, strawberry ice creams ... in short anything to do with strawberries. The Big Strawberry was completed in 2005. It was built by Cobram Plumbing (they made the steel frame), Competition Kayaks (they did the fibreglass), the Strawberry Farm (they constructed the wire mesh) and Barry Dickson Paint and Panel who painted it. The farm covers 9 ha and there's a huge cafe area, a children's play area and a nearby Nature Reserve Walking Track. For more information tel: (03) 5871 1300 or check out http://www.thebigstrawberry.com.au.

Koonoomoo Nature Reserve Walking Track
Located next door to the Big Strawberry (the access is off the Goulburn Valley Highway) the Koonoomoo Nature Reserve Walking Track. Once owned by the local Hot Rod Club it has been returned to native bushland where it is possible to see the rare legless lizard (yes, it does look like a snake - it is pale grey brown with a darker head and white below - it has external ear openings) which is only 200 mm in length. The birds in the area are typically the striated pardalote, black faced cuckoo shrike, grey shrike thrush, red wattle bird, jacky winter, red capped robin, rufous whistler, white plumed honeyeater and eastern rosella. The flora includes the Murray Pine which was planted in 1995 and occupies the south-east corner of the track.

Coonanga Homestead
Located at 575 Bearii-Mywee Road 13 km from Strathmerton (take the Goulburn Valley Highway west and turn right onto Williams Road - it is just beyond the Bearii-Mywee Road crossing) Coonanga Homestead still stands. Unfortunately there is only a glimpse from the road.
The Victorian Heritage Database explains: "Coonanga Homestead (1866) is of architectural significance as one of the largest timber slab homesteads in Victoria and also significant for the refinement of its sawn horizontal timber slab construction. It is notable for the unusual use of stud framing to the interior and for the fixing of the conventional lathe and plaster internal linings. The canted bay form to the principal rooms is rarely seen in buildings employing horizontal timber slab construction. The homestead is made from wood split on the property, the timber for the ceilings, doors and finishings came from Echuca by paddle steamer and the original shingle roof was later replaced with corrugated iron. The Homestead comprised of twelve rooms and it is now included on the National Register with a `B’ classification.
"The site is historical interest as part of the Strathmerton (or Ulupna) pastoral run owned from the early 1840s by entrepreneur Benjamin Boyd. In 1873, a portion of the run given the name Strathmerton West [or Ulupna West] passed into control of a partnership which included the Western District pastoralist George Currie. Currie had initially commenced pastoral activities in partnership with his brother John Currie on the Larra run in the Western District which became one of the foremost merino studs in Australia. George Currie also became well known in pastoral circles as an enthusiastic breeder of high class fine wool merinos. In May 1874 Currie completed construction of a sawn timber slab house with the detached kitchen and school room wings at the rear. Currie called his new residence Coonanga. Currie sold Coonanga to James Stewart in 1886." Coonanga homestead was run by the Numurkah and District historical society from 1976 until it was sold to a private buyer. Check out http://vhd.heritagecouncil.vic.gov.au/places/1129/download-report for more information.

Murray River Sandy Beaches
To the north of Strathmerton the Murray River bends and twists and an extended meander which has no fewer than seventeen sandy beaches.

Ulupna Island
Ulupna Island (2833 ha) is located 12 km north of town via Bourchiers Road, Bearii-Mywee Road and Ulupna Bridge Road. It is now part of the Barmah State Park. There are some pleasant natural sandy beaches such as Carter's and Labbett's. Morgan's Beach, also clearly signposted, is further west. The combination of the Barmah National Park and the Moira State Park (in NSW) forms the largest redgum forest in the world. It has a World Heritage listing. It is on a major flight path for migratory birds and is an important breeding ground for waterbirds. Some of the trees in the forest are estimated to be over 500 years old and are over 45 metres high. The National Park is also home to eastern grey kangaroos and emus. Koalas were re-introduced to the island in 1976, after an absence of 74 years, and can be seen high in the branches.
There are a number of canoe trees and ancient middens in the forest. There is extensive evidence that Yorta Yorta Aborigines inhabited this area long before Europeans arrived.
In winter the area usually floods creating a wetland biosphere which becomes a breeding ground for birds (120 species of birds have been documented). It is a popular spot for birdwatching.
There is also a stretch of original Murray River bed to the south of the island (it can be clearly seen on Google maps) that you can walk along. Since Federation the river has changed course and meandered into the Woperana Channel, but the state boundary of New South Wales and Victoria has remained. It is an unusual place where you can walk into New South Wales from Victoria across an historic dry river bed.

* Prior to the arrival of Europeans the area was occupied by the Yorta Yorta Aboriginal people. They lived in the Barmah forest along the Murray River.

* The land was taken up by Benjamin Boyd in 1841. He initially named his property 'Ulupna' but later changed it to Strathmerton.

* Around 1877 a hotel was built establishing a centre for a settlement.

* By 1887 there was some settlement in the area in anticipation of the arrival of the railway from Numurkah. Land blocks were sold at this time.

* The Wesleyan Church was consecrated in 1889.

* In the late 1940s the area was opened up to soldier settlers.

* By the 1950s the area was taking advantage of water from the Murrumbidgee Irrigation Scheme. 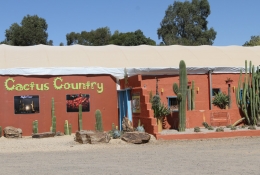 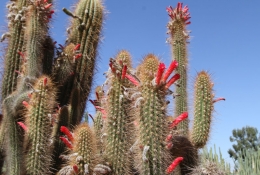 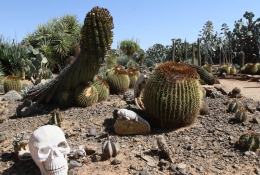 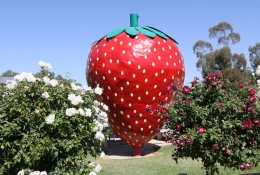 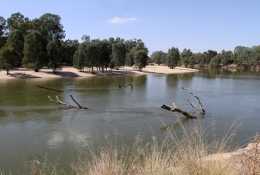 The Murray River and a sandy beach at Ulupna Island