The most famous holiday destination on the Gold Coast.

The idea of the  Gold Coast as a holiday destination really started at Surfers. Then it spread to Broadbeach and Main Beach. In the past decade Surfers Paradise has re-emerged with new projects - Q1, Circle on Cavill, Renaissance and Soul. Every project cost between $750 million and $1 billion dollars and did much to re-assert the importance of Surfers. However, to most people the Gold Coast is, and always will be, about theme parks. How are we going to entertain the kids during the school holidays? Let's go to the Gold Coast. We can spend one or two days at Warner Bros. Movie World and another couple of days at Wet'n'Wild Water World and then there's always Dreamworld and the Currumbin Bird Sanctuary. Today, Surfers, in spite of all its claims to sophistication, is still a magnet for young people with Schoolies Week, teen holidays and holidays for young families being vital to the viability of the cafes, bars and nightclubs and, interestingly, the largest group migrating to the sunshine, being people between the ages of 20-28.

Surfers Paradise is located 78 km south-east of Brisbane via the Pacific Motorway.

Gold Coast Beaches
Although it has different names as it progresses south for 32 km, the long beach, broken only by the headland at Burleigh Heads and the mouths of Tallebudgera Creek and Currumbin Creek, is essentially a single, glorious beach. It runs from The Spit at Southport continuously to the headland at Coolangatta. In that sense it only becomes a series of beaches because humans have decided to call it different names or have established distinct life saving clubs to protect swimmers at certain points along the beach. Thus, from the north, this one long glorious beach is variously known as The Spit, Main Beach, Surfers Paradise, Broadbeach, Mermaid Beach, Nobby Beach, Miami, Burleigh Beach, Burleigh Heads, Tallebudgera Beach, Palm Beach, Currumbin Beach, Tugun, Bilinga, Kirra, Coolangatta, Greenmount, Rainbow Bay, Snapper Rocks and Froggies Beach. And, yes, obviously, the main activities on the beach include swimming, surfing, boogy boarding, surf fishing, walking, photography and sunbathing and the parks adjacent to the beaches are ideal for picnicking, barbecue and play facilities.

Main Beach and The Spit
The Spit and Main Beach, which lie to the north of Surfers Paradise, are a strange mixture of upmarket accommodation, attractive parks and a remarkably quiet beach. Known as Narrow Neck this section of the beach includes the Southport Surf Life Saving Club on Macarthur Parade at the southern end and then a long narrow promontory known as The Spit which is traversed by Seaworld Drive which heads north past the Sheraton Mirage Resort & Spa, the Palazzo Versace and Sea World.

On the eastern side of The Spit there are tracks through low lying coastal scrub and a long stretch of largely untouched beach. South of the Sheraton is Hollindale Park, which has walking tracks, public toilets and picnic facilities. In the north-western corner of The Spit is Doug Jennings Park and extending 500 metres out into the ocean as the southern edge of the Gold Coast Seaway (the narrow stretch of water between Southport and South Stradbroke Island) is a jetty popular with anglers.

Surfers Paradise Beach
Surfers Paradise Beach is a pleasant stretch of the long beach. It has two surf lifesaving clubs - the Surfers Paradise SLSC on the corner of Hanlan Street and the BMD Northcliffe SLSC at Thornton Street. One of the main problems with Surfers Beach is that The Esplanade (the main thoroughfare next to the beach) and the high-rise development reach to the edge of the beach and consequently there is very little foreshore greenery or open area for visitors.

Broadbeach and Carrara
Immediately south of Surfers is Broadbeach. Pratten Park, on the foreshore adjacent Old Burleigh Road, offers visitors an expanse of greenery with parking, picnicking, barbecue facilities. Nearby is the Kurrawa Surf Lifesaving Club. A second surf club - the Broadbeach SLSC - is located further north on Broadbeach Boulevard.

Mermaid Beach
Mermaid Beach is the name given to both the suburb south of Surfers Paradise and the actual beach it is named after. Like Surfers it has no real recreational foreshore area, but there is a surf lifesaving club, with a parking area, and picnic/barbecue facilities on Hedges Avenue.

Jupiters Casino
When it opened in 1986 Jupiters Casino was the first casino and hotel in Queensland and one of the first in Australia. Since then it has had a chequered career with constant refurbishment and updates. The most recent was in 2012 when, after a $20 million makeover, the complex's theatre was reopened with a 2,000 seat capacity. The Jupiter's complex includes eight bars, seven restaurants, conference facilities, a ballroom, health spa, gym, and a monorail which connects the property to the Oasis Shopping Centre across the road. The hotel, with 594 rooms, stands 66 metres and has 21 floors. It had a $16 million makeover in 2010. For more details check out http://www.jupitersgoldcoast.com.au.

Sea World
Sea World, facing The Broadwater, is a huge 25 ha marine theme park which offers a combination of rides, shows and attractions, including animals, thrill rides and family entertainment. So successful has Sea World become that there is now a specific hotel - the Sea World Resort - attached to the complex. The deals, rooms, packages and specific attractions are all covered in great detail at two website locations. For Sea World check out http://seaworld.com.au and for Sea World Resort head to http://seaworldresort.com.au. They provide detailed information and will answer all your questions.

Wet'n'Wild Water World
Located on the Pacific Highway at Oxenford, Wet'n'Wild is a 10 ha water fun playground with heated pools and slides. The theme park's activities range from family fun at the Wet'n;Wild Junior, Calypso Beach, Whirlpool Springs and the Giant Wave Pool (pretty funny given that real waves and real surf are less than a kilometre away) through to "extreme" activities with names like Blackhole, Kamikaze, Mach 5 and Tornado. Somewhere in the middle are rides like Mammoth Falls, River Rapids and Surf Rider. A total of 16 rides to keep the kids entertained all day. The emphasis is on diversity with something for each age group, from the hair-raising to the languid and lazy. The water areas are surrounded by grassy grounds with picnic and barbecue facilities and deck chairs for relaxation. For all the detailed information check out the website at http://wetnwild.com.au which has special deals, prices and information about all the activities.

Warner Bros. Movie World
The most famous of all the attractions in the area is the Warner Bros. Movie World located on the Pacific Motorway at Oxenford. Designed as a working studio with a number of large stages and an extensive range of state-of-the-art equipment. The combination of studio and fun park means that most of the Park's attendants are young actors hoping for work, and their first big break, in the studios next door.

Warner Bros Movie World is basically a combination of Disneyland and Universal Studios. It celebrates the fun and excitement of movies. Shops sell souvenirs as well as providing a wide range of food. Other attractions include rides through various movie scenes and a conducted tour of the movie studio which shows some of the techniques used to create cinematic illusions. One particularly appealing aspect of Movie World is the way that certain events just occur naturally (well as naturally as anything in a movie world) on the street. It is easy to spend a day here. For detailed information on the daily activities, the range of rides and the thirteen eateries on the site, check out http://movieworld.com.au.

Australian Outback Spectacular
In 2006 Warner Village Theme Parks spent $23 million building the Australian Outback Spectacular which is designed to provide an Aussie BBQ dinner complete with beef for the main course, ninety minutes of non-stop spectacular entertainment and to offer a night for the whole family. Located in Entertainment Road, Oxenford, the purpose-built arena is a wonder of modern technology. It has a seating capacity for over 1000 people. There are huge screens, room enough for a helicopter, and the huge central area where the action takes place is the size of an Olympic swimming pool and is covered with sand. For much more information check out http://outbackspectacular.com.au which provides details about the shows, the evening meals and the ticket prices.

* The narrow opening to The Broadwater was noted in 1822 by John Bringle.

* The first known white settler was James Beattie who settled on the north bank of the Nerang River in 1869. He sold out to Johann Meyer who opened the Main Beach Hotel.

* In 1923 James Cavill paid £40 for a block of land and proceeded to build his famous Surfers Paradise Hotel. The hotel opened in 1925.

* In 1933 locals, encouraged by the success of the hotel, petitioned to have the town's name changed from Elston to Surfers Paradise.

* During World War II the hotel was used by convalescing soldiers, some of whom later returned with their wives and families to enjoy the beach and the excellent climate.

* The removal of building restrictions in the early 1950s saw the beginning of high-rise development.

* In 1959 the town of South Coast was changed to the 'City of Gold Coast' and Southport became the city's administrative centre. This year saw the town's first high rise, Kinkabool.

* Today Surfers Paradise is an endless row of high-rise development, all catering for the tourism which occurs on the coast throughout the year. It has the greatest concentration of five star hotels in Queensland.

The official Surfers Paradise site can be accessed at http://www.surfersparadise.com. 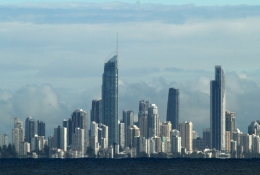 The view of Surfers Paradise from Coolangatta 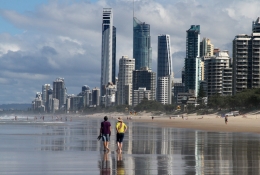 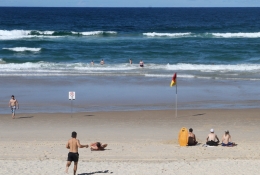 Surfers Paradise Beach on a sunny day in March. 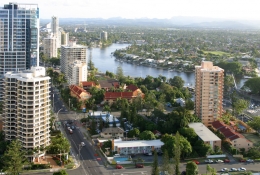 The view of the Nerang River and the hinterland from Q1. 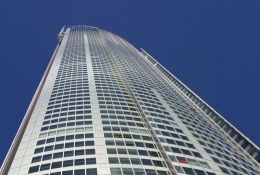 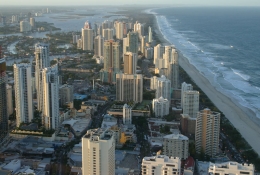 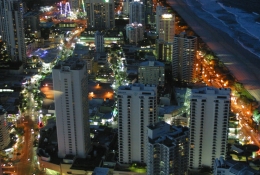 Looking north from Q1 at night with Surfers Paradise below. 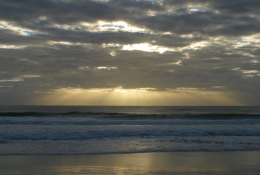