Sleepy village which was once the official country retreat for New South Wales governors.

To the casual visitor Sutton Forest seems to be a straggling collection of buildings which amount to little more than a pub, a few houses and cottages, a couple of antique shops, the landmark Old Butchers Shop at "Scotch Corner", a riding school and a church. It is a "now you see it, now you don't" village on the Illawarra Highway between the Hume Freeway and Moss Vale. Yet it was here, for nearly eighty years, that the Governors of New South Wales (all sixteen of them) came to Hillview, their official country residence. This seemingly inconsequential village is steeped in the history of New South Wales.

Sutton Forest is located 147 km south-west of Sydney via the Hume Freeway and Illawarra Highway. It is 6 km west of Moss Vale.

On 2 November, 1820 Governor Lachlan Macquarie named the small settlement which grew up here after Charles Manners-Sutton who, from 1817-1835, was the speaker of the British House of Commons. So, technically, it should be Manners-Sutton Forest.

Hill View
On the road between Sutton Forest and Moss Vale is Hill View (now a country house hotel - see http://www.hillviewheritagehotel.com) which was, from 1882 to 1958, the official country residence of the governors of New South Wales. The homestead was built in the late 1850s by Robert Richardson. The government purchased the house, the outbuildings and estate in 1882 and carried out extensive renovations. The grounds and the interior were upgraded and Lord Augustus Loftus (NSW Governor from 1879-1885) became the first governor to use the house as his country retreat. In total it was the country home of sixteen state governors whose names are listed on the Hill View gates which now stand beside All Saints Church of England in the village.

The retreat was used until 1958 when it was sold. The government re-purchased it in 1986. Since 1986 it has had a chequered career with a variety of unfulfilled plans and a variety of caretakers being employed for the revitalisation of the buildings. It has finally been turned into a heritage hotel, an entirely appropriate use for the building and its outbuildings. The gardens are slowly being revitalised and it has the potential to become a popular, elegant and historically significant destination for weekend getaways, weddings, and conferences.

The Old Butcher's Shop
The dominant building on the corner of the Illawarra Highway and Exeter Road, built in 1895, has variously been known as the Old Butcher Shop, Highlands Delights and A Little Piece of Scotland (many of them are a nod to the Scottish nature of the Southern Highlands which is still celebrated in nearby Bundanoon). It is currently a coffee shop and a fruit and vegetable outlet. In the past it has been a butcher's shop and, for a time, fulfilled its Scottish origins as A Little Piece of Scotland selling Scottish craftware and exceptionally good shortbread.

All Saints Church of England
All Saints Church of England is a commentary on the power of the Church of England in Australia. It is no accident that when Hill View was sold in 1958 the Vice Regal gates, complete with their VR insignia, were installed beside the church and that the inscription noted "In loyal and affectionate memory of the Governors resident at 'Hill View', Sutton Forest, named hereunder, who joined so freely in church and community life." It then lists all the sixteen governors who used Hill View as their country retreat.

All Saints was erected in 1861. It was designed by the great colonial architect, Edmund Blacket, and consecrated by Bishop Barker. The church cemetery is the resting place of soldiers who were stationed at Berrima as well there are the graves of troopers and bushrangers.

Sutton Farm
On the Illawarra Highway between Sutton Forest and the Hume Freeway is Sutton Farm, now the Highlands Equestrian Centre, which was built by convicts from Berrima  around 1830. The old residence, which has been extensively altered over the years, features a magnificent cedar staircase which was brought to Australia from a 17th century church near Dublin. The house's brief moment of contemporary fame came when it was used in the film Phar Lap. Today the Highlands Equestrian Centre offers 'learn to ride' lessons, residential riding camps, trail and pony rides and formal riding tuition in dressage and showjumping. Tel: (02) 4868 2584. For more information check out http://highlandsequestrian.com.au

St Patrick's Church
On the Illawarra Highway on the way to the Hume Freeway is St Patrick's Church built on land which was assigned to John Cosgrove in 1840. In 1854 Cosgrove gave the Catholic Church 3 acres, one rod and 3 perches 'to permit and suffer to be erected and built upon the land, a church or chapel'. A timber church, which also operated as a school, was built on the site in 1854 but it wasn't until 1879 that a stone church, costing £654, was opened for worship.

Red Cow Farm
Beyond St Patrick's Church on the Illawarra Highway is this justifiably superb garden which, as the Red Cow Farm website explains: is "a unique cool climate garden set on 2.5 hectares ... the simplicity of its presentation disguises a garden of sophisticated structure and ambitious schemes. Developed by its creative owners Ali Mentesh and Wayne Morrissey around their historic 1820’s cottage, the garden is abundant and secretive ... Red Cow Farm features 20 rooms with an exuberant cottage garden, monastery garden, abbess’s garden, a stunning collection of rare and unusual perennials, woodland, old fashioned roses and clematis, beech walk, lake, bog garden, orchard and kitchen garden". The cottage was originally the Red Cow Inn, erected in 1834 on land granted to George Sewell. For information about admission and opening times check out http://www.redcowfarm.com.au/home.html

* Prior to the arrival of Europeans the Southern Highlands were inhabited by the Tharawal Aboriginal language group.

*  As early as 1798 an ex-convict, John Wilson, led a European party into the district looking for suitable farming land. One of the members of the party, John Price, wrote that the area was : "the most beautiful country, having nothing but fine large meadows with ponds of water in them, fine green hills but very thin of trees".

* In 1814 Hamilton Hume and his brother explored the area and in 1815 John Oxley brought cattle to the district.

* In 1817 Hamilton Hume returned accompanied by Charles Throsby. They explored the country to the west of Sutton Forest. Throsby called the Sutton Forest area 'Cooloorigan'.

* In 1819 Governor Lachlan Macquarie rewarded Throsby for his explorations by granting him 1000 acres (405 ha) and making him superintendent of the roadworks from Picton to the Goulburn Plains.

* In November 1820, Macquarie travelled to the area, named Charles Throsby's land holding Throsby Park, named the settlement at Sutton Forest after Charles Manners-Sutton, and encouraged Charles Wright, who had been a constable at Parramatta, to take up land in the area.

* In 1822 a former convict, Edward Shipley, took up land at Stonehill (now Sutton Farm) with his wife, Mary.

* In 1828 James Atkinson, who had established the Oldbury estate, recommended land on the Medway Rivulet as an ideal townsite. Although the Surveyor-General agreed, the village was not officially established until 1854.

* In spite of no official approval the village grew. A Church of England school was established as early as 1826. An Anglican chapel  was erected in 1829 although it was not replaced until All Saints Church of England, designed by Edmund Blacket, was completed in 1861. Three inns appeared on the road south - the Talbot (1833, renamed the Royal in 1866), the Red Cow (built on George Sewell's land grant) and the Hart (both 1834). The first store also appeared some time in the 1830s.

* In 1865 the village was visited by the bushranger, Ben Hall and his gang. They rampaged through the district, held up a group of people at Paddy's River; robbed the toll collector at Hanging Rock; held up Kelly's Hotel, about 5 km north of Hanging Rock; and then, infamously, returned to Paddy's River, gathered everybody into the town's two inns, forced some musicians to play music, danced till dawn, told their prisoners they were going to Berrima to free everybody from the gaol and disappeared.

* The railway arrived in 1867 and Sutton Forest became a popular holiday destination in the hot summer months. Large country residences were built and people eager to enjoy the cool mountain airs came on the trains.

* In 1882 the NSW government purchased 'Prospect', the country home of Robert Richardson (of Richardson & Wrench fame), and renamed it Hill View. It was used as the governor's country retreat until 1958.

A handy local website devoted to the town can be found at http://www.highlandsnsw.com.au/towns/sutton_forest.html 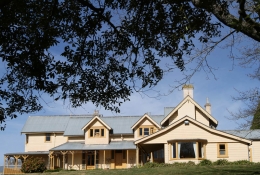 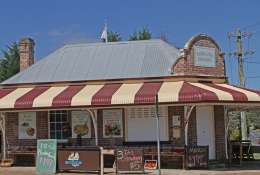 The shop on the corner at Sutton Forest has changed hands many times. 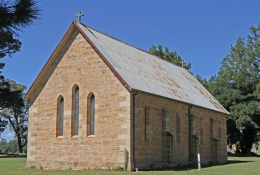 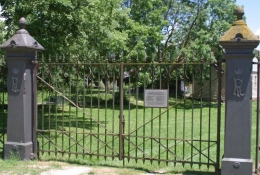 The gates which were removed from Hill View and installed in 1958 beside All Saints Church. 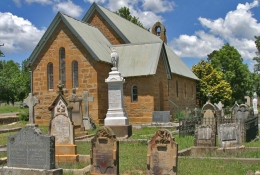 The graveyard and All Saints Anglican Church (1861). 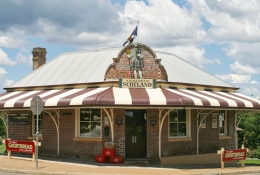 In a previous life the Old Butchers Shop (1895) was known as A Little Piece of Scotland and boasted the best shortbread in the country (pic. 2003)