Important service centre on the eastern shore of Lake Macquarie.

Swansea is the largest town in the City of Lake Macquarie. The "city" which covers 749 square kilometres includes Lake Macquarie which is the largest coastal saltwater lake in the Southern Hemisphere, covering 109 square kilometres. It is four times the size of Sydney Harbour. There is no dramatic tidal range but the tidal race at Swansea Channel - the channel which links Lake Macquarie to the Pacific Ocean - can be strong and is ideal for fishing. Today Swansea is a pleasant daytripper destination from Newcastle with quiet beaches, interesting walks beside the lake and opportunities for family picnics and barbecues.

Swansea is located 132 km north of Sydney via the Newcastle Freeway and Pacific Highway. It is located 27 km south of Newcastle.

The Awabakal Aborigines called the district Galgabba. The first Europeans called it Pelican Flat for the unsurprising reason that a large number of pelicans lived on Lake Macquarie. This name was changed to Swansea in 1887. Apparently a local hotelier, Robert F. Talbot, said the area reminded him of a coal port in Glamorganshire and consequently it was named Swansea after Swansea in Wales.

Pelican Foreshore Reserve
Travel north from Swansea and the next suburb-village on Lake Macquarie is Pelican, known until 1991 as Pelican Flat and the original name for Swansea. Turn left into Lakeview Parade and there are parklands with picnic and barbecue facilities, a playground, boat ramps and views across the channel to Lake Head, Spectacle Island and Pelican Island. This area is known as the Pelican Foreshore Reserve. There are pleasant walks along the shoreline of the Swansea Channel. Historically the area was known as Ky-yee-bah ("the place of games") by the Awabakal Aboriginal people who lived around the lake.

The Entrance to Lake Macquarie
At the eastern edge of Swansea is the Lake Entrance. The inlet channel winds into the Swansea Channel from Reid's Mistake Headland and the breakwater around to Black Neds Bay. On the northern side of the headland the coast stretches north to Redhead Point. The southern coastline is characterised by a rocky shoreline around Caves Beach and on to Catherine Hill Bay. There is accessible bushland at both Blacksmiths Point (the northern side of the channel) and Swansea Heads to the south. It is a pleasant area for bushwalking and having picnics.

Swansea Heads Petrified Forest
The Swansea Heads Petrified Forest is located on the southern headland of Swansea in the area known as Reid's Mistake. It is an area which was once covered by a forest which became fossilised. There is a very detailed description of the Petrified Forest at Geocaching. Check out https://www.geocaching.com/geocache/GC49JHK_the-petrified-forest?guid=6bcd9fde-a80d-4e73-94d2-df9a182d2941. The website notes: "The petrified forest located at Reid's Mistake was once a group of Glossopteris trees that were fossilised approximately 250 million years ago by a volcanic eruption believed to have occurred some 20 km away. The radiating blast from the volcano caused a shockwave which snapped off the trees, and tilted the stumps aligning the trunks east west. This volcanic eruption also produced a fast moving current of hot gas and rock (known as a pyroclastic flow or pyroclastic density current), which resulted in the ancient forest being buried under a layer of volcanic ash. Over time, the volcanic ash consolidated and lithified to form 'tuff'. The fossilised stumps throughout the rock platform appear to have been preserved in their original growth position, some of which have been 'coalified'. Scattered throughout the rock platform are many example of leaf fossils embedded within the fine laminated tuff, which indicates 'ash-fall'."

Caves Beach
There is an excellent viewing area/lookout at the southern end of Caves Beach (opposite the junction of Park Avenue and Caves Beach Road) and below it lie a network of caverns which can be easily accessed by simply going down onto Caves Beach and walking south at low tide. They are dramatic caves which have been carved out of the sandstone cliffs. This is a popular surfing beach. There is a good description of the walking trail along the beach at the Wild Walks website. It is 904 metres return and takes around half an hour (at low tide). Check out http://www.wildwalks.com/bushwalking-and-hiking-in-nsw/wallarah-national-park/caves-beach-caves-walk.html.

* Prior to the arrival of Europeans around the shores of Lake Macquarie the area was occupied by people from the Awabakal Aboriginal language group. A midden discovered at Swansea Heads in 1971 has been dated to 7,800 years before the modern era.

* Pressure from settlers wishing to move into the Hunter Valley caused the penal settlement at Newcastle to be removed to Port Macquarie in 1822.

* Lieutenant Percy Simpson was probably the first European settler in the Lake Macquarie area. He received a 2000 acre grant in 1826 at Cooranbong, was assigned six convicts who cleared the land, grazed cattle, and built a homestead and stockyards near a ford over Dora Creek.

* In 1826 a missionary, the Reverend Lancelot Threlkeld, an ex-actor and businessman, established a 1000-acre reserve for an Aboriginal mission which occupied the whole northern peninsula, from Pelican north-west to Redhead and north-east to Croudace Bay. Threlkeld chose the land after noting it was a gathering point for Aborigines, drawn by the living conditions and food around the lake.

* The first land grant on the southern side of the channel was to J.H. Boughton in 1833.

* Boughton started up a small saltworks managed by convict servants in 1835. It was forced to shut down when the convicts helped some runaways across the entrance to the lake.

* Cattle thieves used the empty saltworks buildings until they were arrested in 1841.

* Threlkeld started the first coal mine around the lake at Coal Point, c.1840, and subsequently bought ten acres at Swansea Heads for coal-loading and storage in 1842.

* John Taaffe arrived in the 1850s. Taaffe was a farmer and grazier who ran cattle near Chain Valley Bay. He was followed in 1853 by Thomas Boyd.

* By 1860 there were 30 or 40 Chinese living at Pelican Flat. They caught and dried fish and grew vegetables.

* The first town allotments at Swansea were sold in 1863 and taken up by fishermen and seamen.

* Others relied on the burning of oyster shells for lime, the making of hats from cabbage trees and the procuring of swans. A water cargo trade based on coal and timber flourished.

* In 1871 the Aborigines in the area were so reduced in number that one family had a reserve set aside for them at Black Ned's Bay.

* The road from Newcastle to the northern side of the channel was improved in 1873. From there people crossed by boat with horses swimming behind.

* By 1877 there were 120 people at Pelican Flat and a dredge was at work deepening the shallow channel. More settlers arrived from Catherine Hill Bay when the mine closed that year.

* Consequently the postal service was moved from Catherine Hill Bay to Pelican Flat in 1879.

* Captain Thomas Boyd, a mariner who piloted boats in and out of the lake, was appointed pilot at Swansea (then known as Pelican Flat) in 1883. His brother became the lake's first fisheries inspector and his son James became a boat builder, establishing J.L. Boyd and Sons of Newcastle.

* The name of the settlement was changed from Pelican Flat to Swansea in 1887.

* Swansea's hopes of becoming a major commercial and coal-shipping port ended with the completion of the Sydney to Newcastle railway along the western shore in 1889.

* In 1900 Margaret, the wife of Black Ned, died. She was the last full blood member of the Awabakal Aborigines.

* The village of Swansea was proclaimed in 1906.

* In 1937 a government bus service began running between Swansea and Newcastle.

* In the 1950s a series of power stations were built around the lake, at Eraring, Wangi Wangi and Vales Point.

* The most recent bridge across the entrance to the lake was completed in 1989.

There is no specific website for the city but the information and suggestions at http://www.visitlakemac.com.au/explore-the-city/places-to-go/swansea-caves-beach-and-the-wallarah-peninsula are useful. A detailed history of the town can be accessed at https://history.lakemac.com.au/page-local-history.aspx?pid=1085&vid=20&tmpt=narrative&narid=80. 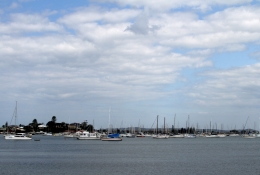 Looking from Belmont south across Lake Macquarie to Swansea 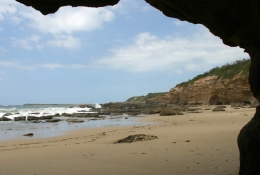 Looking out from a cave on Caves Beach. 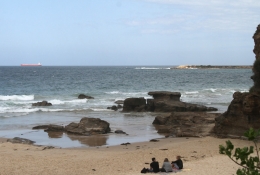 Caves Beach lies to the north of the caves. 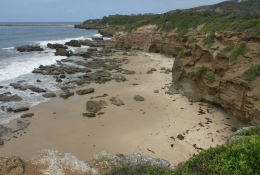 The rocks and the amusingly named Stinky Point from Caves Beach lookout.