Town on Great Oyster Bay across from Freycinet National Park

Unlike all the other historic towns in Tasmania, Swansea is on the coast. It has views across Great Oyster Bay towards the Hazards in the Freycinet National Park. Today the town's primary appeal lies in its access to the Freycinet Peninsula. Travellers pause to admire the historic homes and buildings; spend time fishing and enjoying the distinctive charm of Swansea as a holiday destination; and head for Freycinet for bushwalking and to marvel at Wineglass Bay.

It is widely accepted that the town was named by George Meredith, a Welshman by birth, who named it after Swansea in Wales. It was originally known as Waterloo Point. Being keen on all things Welsh, Meredith also named the county, Glamorgan.

Heritage Walk
There is a Heritage Walk brochure available from the local Visitor Information Centre. It offers detailed information about the many fine examples of colonial architecture in the village.

Swansea Bark Mill and East Coast Museum
Located at 96 Tasman Highway the Swansea Bark Mill complex, incorporates the Tavern, Bakery and Bark Mill Museum.  It is a combination of a restored working display and pioneer exhibition; a tavern and an on-site bakery. The bark mill was built by the Morey family in 1885 and still has historic machinery which originally processed black wattle bark. The process produced tannic acid, the basic ingredient for tanning leather. For more information

East Coast Heritage Museum
The East Coast Heritage Museum, located at 22 Franklin Street, has extensive displays recording the Aboriginal history, French exploration and early British history of the district. This section of the building was constructed by James Hurst in 1860 as a combined residence and school. It is open from 9.00 a.m. - 5.00 p.m tel: (03) 6256 5066 for more information.

Morris' General Store
The most impressive building in Swansea is the three-storey Morris' General Store which began as a single-storey building in 1838. The two additional storeys were added as the business expanded. It is a simple, but striking, rectangular structure with hipped iron-clad roofs and 12-pane windows. It is still a general store (part of the IGA network) after over 100 years. There is a visitor's room with an historic display.

Council Chambers
Located in Noyes Street the Municipal Office and Court House was constructed by James Hurst in 1860. It is a unique and charming building characterised by a lean-to veranda, a hipped iron roof, arched windows and the foundations and main walls are constructed from painted rubble with brick quoins and opening surrounds. There is some evidence that the materials used to construct the building came, in part, from the military outpost at Waterloo Point.

Meredith House
Now known as Meredith House and Mews, this 'colonial accommodation' in Oyes Street combines modern mews accommodation with historic Meredith House. The land was originally owned by Charles Meredith, the husband of noted colonial artist and poet, Louisa Anne Meredith. The land was subsequently purchased by J.A. Graham who built the elegant two-storey Georgian House in 1853. It was known as Laughton House and when Graham married a Miss Cope, a schoolteacher, it became a girls school. By 1870 it had been purchased by James Morris and by 1892 it was a boarding house. It is now boutique accommodation. Check out http://www.meredithhouse.com.au/ for details.

All Saints Church
Located at the top of Noyes Street, on the corner with Wellington Street, is the Gothic style All Saints Church which was consecrated  in 1871. It was designed by Henry Hunter. It was constructed of roughly coursed fieldstone, it has dressed sandstone trimmings to buttresses and gable copings. Today it is park of the Swansea Uniting and Anglican Co-operating parish.

Schouten House
Located at 1 Waterloo Road, Schouten House was built by William Champion of Hobart Town in 1845 as a wedding gift to his daughter Theresa. It became known as the Swansea Inn and the southern wing was used as a brewery. When Theresa died in 1855 it was sold and became a Grammar School. By 1860 it had become a private residence and it was used by a number of local doctors. It became a private home in the 1890s when it was purchased by Sarah Mitchell who lived in it until 1938. The complex history of the dwelling is recounted in great detail at http://www.schoutenhouse.com.au/history.shtml. For more information and bookings tel: (03) 6257 8564.

Waterloo Point
This is a charming and picturesque scenic walk around the Loontitetermairrelehoiner track is an ideal way of seeing Waterloo Point (the site of the first settlement), and to enjoy views across the bay to The Hazards, Schouten Island and Freycinet Peninsula. Through September to March it is home to nesting shearwaters who migrate from the Northern Hemisphere to breed on the headland.

Spiky Bridge
Located 7.5 km south of Swansea, Spiky Bridge was constructed by convicts as part of the convict coach road which connected Swansea to Little Swanport.  which was built in 1843. It was constructed from fieldstones which were laid without mortar or cement. The parapet features fieldstones laid vertically which gives the bridge a spiky appearance. It has been claimed that the spikes were designed to prevent cattle falling over the sides. The blog site - http://ontheconvicttrail.blogspot.com.au/2013/05/the-spiky-bridge.html - adds the following information: "It is popularly thought that the Spiky Bridge was built after Edward Shaw of 'Redbanks' gave Major de Gillern, Superintendant of Rocky Hills Probation Station, a ride home one night after a game of piquet. Shaw drove his gig at breakneck speed through the gully so as to impress upon the Major the need for further road works. Needless to say, Major de Gillern found the ride quite unpleasant and the bridge was erected shortly after. Initially the bridge was called 'Laferelle’s Bridge'. Thomas Laferelle was a surveyor and civil engineer who served as assistant supervisor at Rocky Hills Probation Station from May 1843 till June 1845. He most likely supervised the construction of the bridge. The reason why the “spikes” were incorporated in the design remains a mystery. One of the often quoted reasons for the spikes was to stop cows from falling over the edge into the gully. Another reason given is that when the bridge was constructed, the convicts responsible for the construction wanted to exact some form of revenge of their supervisor and thus started sticking the rocks in the wrong way, thereby starting a decorative trend that became responsible for the bridge’s name!"

* Prior to the arrival of Europeans the area was occupied for at least 35,000 years by people from the Paredarerme Aboriginal language group. The number of shell middens in the area suggests that visitors from other areas may well have come to the shores where mussels and fish were in abundance.

* A Captain Cox sailed up the eastern coast of Tasmania in the brig Mercury and, hearing of vast colonies of seals, on 3 July 1789 sailed along the western shore of Maria Island and into a stretch of water he named Oyster Bay. He described the bay as "being quite landlocked and sheltered from the wind in every direction."

* In 1821 Lieutenant George Meredith of the Royal Marines and two tenant farmers from Glamorgan in Wales settled in the district. Three Welsh families were the founding fathers of the town.

* In 1827 Captain George Hibbert of the 40th Foot Regiment established a military outpost at Waterloo Point (near the present site of the Swansea Golf Club). It had accommodation for the soldiers, a guard house and a commissariat.

* By 1830 there were 150 free residents and 170 convicts and assigned servants in the district. At this time most traffic from Hobart came via Campbell Town.

* Between 1835-45 convicts from the Rocky Hills Probation Station worked on the roads through the mountains to Avoca and south to Hobart.

* In the late 1830s a number of substantial buildings - Morris's Store, the Black Swan Inn - were built as the town grew in importance.

* By 1852 one observer wrote that it was little more than "One struggling street, its chief feature a long wooden pier, erected by the inhabitants with government aid, the white cottage of an English clergyman on the point to the south ... and a few whitewashed buildings."

* The town continued under military control until 1860 when the Glamorgan municipality, the first rural municipality in Tasmania, was established.

* In 1863 the Waterloo Point Post Office was renamed Swansea.

* In 1885 the Swansea Bark Mill was established. It continued to operate until the 1960s.

* The town became the most important service centre on the lower eastern coast and today is a popular holiday destination.

There is a local website - http://www.visitswanseatasmania.com.au - which has information about accommodation and eating. 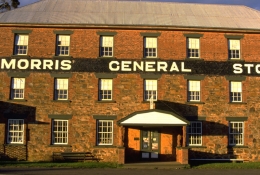 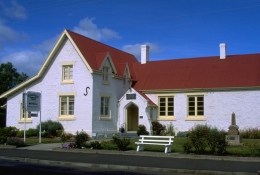 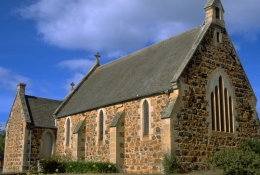 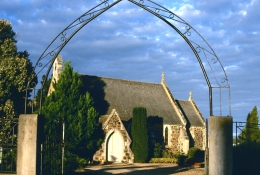 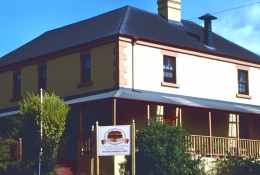 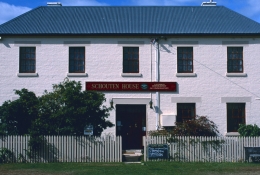 Schouten House was built by a Mr Champion of Hobart Town in 1845 as a wedding gift to his daughter Theresa. 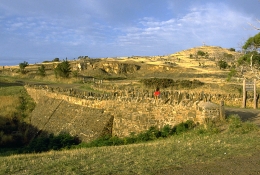 The Spiky Bridge - a convict era construction circa 1843. 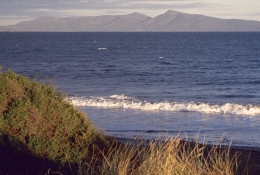 The view from Swansea across towards Freycinet Peninsula.