Tailem Bend is a small rural service town on the banks of the Murray River. It is surrounded by fertile river soils which are used for dairying, pig farming and growing grain. The town's main attraction is the huge Old Tailem Bend Pioneer Village which has more than 90 historic buildings. It is configured like a South Australian town from the 1940s or 1950s.

Located 96 km east of Adelaide and 21 metres above sea level, Tailem Bend is one of the last towns on the banks of the Murray River before it disgorges into Lake Alexandrina.

There is an amusing dispute about the origins of the town's name. One school of thought argues that it is a corruption of the Ngarrindjeri word "thelim" meaning "bend" - the town is on a bend in the river but if this is true then it is really being called "Bend Bend". Another school of thought argues that Donald Gollan, an early European settlers, called his property 'Taleam'. Thus "Taleam Bend". Still others say it has something to do with cutting tails off sheep and others argue that it was Aboriginal advice on how to get cattle to swim across the Murray 'bendem tail, boss' which sounds very suspect. This may be a record: four different explanations.

Old Tailem Bend Pioneer Village
Located on the South Eastern Freeway 5 km south of Tailem Bend, this huge historic village contains more than 100 old buildings including corner stores, emporiums, dance halls, hospitals, dentists, chemists, barbers, butchers, bakers, saddlers, clock shops, bootmakers, pubs, stables, police stations, coach and bike shops and the Cobb & Co terminus. Peter Squires, who created the town, writes: "I started building Old Tailem Town in 1982 after visiting Swan Hill's village in 1971. I gathered buildings from a 150 mile radius and put them together in a form of an old town depicting the times from 1920 to 1960."
The buildings include the Long Flat Town Hall (1905), Murray Bridge Railway Administration Office (1906), Wolseley Methodist Church (1900), Langhorne Creek bakershop (1920), Wattleford Methodist Church (1900), Peake Railway Station (1906). The website explains that it is a perfect opportunity to wander through a town and imagine what life was like in the 1940s and 1950s. "Imagine living life without the technology we have today. There were very few of the handy gadgets we use now to make our life easier. Clothing was washed by hand, horses were a common form of transport and if you wanted a message to get somewhere quickly, you sent a telegram ... Imagine getting hot water out of a kettle and putting it in a dish to do the washing up, having bar soap in a jam tin with holes in it to swish around in the dish in order to make suds for the washing up. Then imagine boiling water in the copper outside and carrying it inside to a tin bath every time you wished to wash yourself." Tel: (08) 8572 3838, open 10.00 am - 5.00 pm daily. Check out http://www.oldtailemtown.com.au for more details.

RX Class Steam Locomotive No: 201
Located in the Tailem Bend playground since 1967, this historic steam train was built in Britain and came into service in 1913. It continued to operate until 1965 and during that time clocked up 868,311 mile

River Bend Heritage Trail
There is a 25 km circuit hiking trail (it lasts 7-8 hours) from Tailem Bend to Wellington which passes along the banks of the Murray River, visits the Pangarinda arboretum at Wellington, crosses the river on the Wellington Ferry and explores the historic buildings in Jervois. There is a brochure with a detailed map and instructions which can be downloaded at http://www.walkingsa.org.au/wp-content/uploads/2014/02/Riverbend-Heritage-Trail-web.pdf.

* Prior to the arrival of Europeans the area along the Murray River was occupied by the Ngarrindjeri Aboriginal people.

* The Ngarrindjeri people were decimated by the arrival of Europeans through a combination of smallpox (which raged all the way up the Murray River) and massacres.

* The explorer Captain Charles Sturt rowed a whale boat down the Murrumbidgee and Murray Rivers in late 1829 and reached the present site of Tailem Bend in early February before entering Lake Alexandrina on 9 February, 1830.

* After Sturt's exploration the Murray was opened up particularly by overlanders who moved sheep and cattle across the land.

* By the 1840s there was a ferry across the Murray River at Wellington which meant that the more difficult terrain, particularly the high cliffs around Tailem Bend, was overlooked in the development of the river bank.

* The town was created when the railway reached the district in 1886. 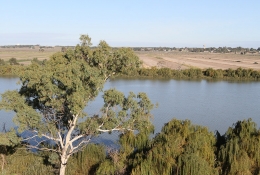 View across the Murray River towards Tailem Bend 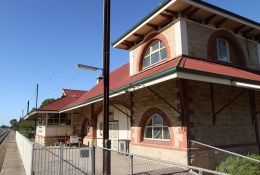 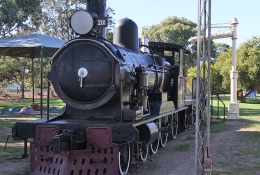 RX Class Steam Locomotive No: 201 in the Tailem Bend playground 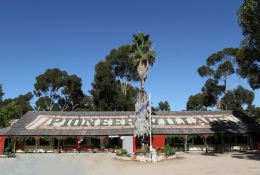 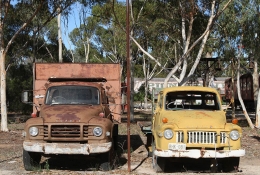 Old trucks on display at the PIoneer Village 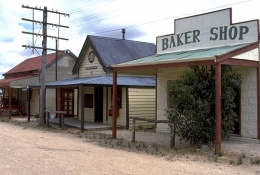 A row of buildings at Tailem Bend Pioneer Village