Talbingo is a town of such historic importance that it should have been protected from the excesses of the Snowy Mountains Scheme. It is the town where Miles Franklin, of My Brilliant Career fame, was born. The local Talbingo Hotel was known for its trout fishing and its wildness which once extended to a man riding his horse into the main bar and shooting a hole in the ceiling. In the late 1950s Ken Murray, at the time the successful publisher of Man and House and Garden magazines, built himself a huge Xanadu-like home on the top of a hill behind the town when he purchased Boraig Station - it can still be seen from the lookout above Tumut T3 Power station.
The historic town was a place of surpassing loveliness where the Talbingo and the Jounama creeks made their way through rugged country and the autumn colours of the willows and poplars, planted beside the creeks by early settlers, set the valley ablaze.
Few people who experienced the valley in childhood ever forgot it. Miles Franklin, in Childhood in Brindabella writes of Talbingo: "No other spot has ever replaced the hold on my affections or imagination of my birthplace, nor are any other incidents so clearly and tenderly etched in my memory as those connected with it."
Today Talbingo is a quiet township located on the shores of the Jounama Pondage which lies at the base of the Tumut 3 Power Station. The construction town built in the 1960s was originally one of the many camps established by the Snowy Mountains Authority but, being outside the Kosciusko National Park, it has not been subject to the park's restrictions. The houses in the township are now privately owned and used by anglers and skiers. Sadly the town's past history is drowned under the Jounama Dam and the Blowering Dam.

Talbingo is located 452 km south-west from Sydney via the Hume and Snowy Mountains Highways, 40 km south of Tumut and 412 metres above sea level.

No one is certain what "talbingo" means or where it comes from. One version is that it is an unholy mix of English and Wiradjuri - the English word "tall" connected to "bingo" meaning "belly". ie big belly - a possible description of Mount Talbingo.

The Miles Franklin Connection
There are two powerful reasons for the enduring importance of Miles Franklin. Her name is attached to the most prestigious literary award in Australia and, in 1979, a movie of her most acclaimed book My Brilliant Career was not only hugely popular but helped to launch the careers of actors, Sam Neill and Judy Davis, and director, Gillian Armstrong. It won a Golden Globe for Best Foreign Film and a Golden Palm at the 1979 Cannes Film Festival.
There is little left that can be experienced of Miles Franklin's involvement with the town. This is demonstrated by a sign on the way into town which reads 'Original Lampe Homestead - Birthplace of Miles Franklin in October 1879 - 500 metres'. The arrow which points in the direction of the '500 metres' indicates that the homestead is now under the waters of the Jounama Pondage.
Franklin's mother, who at the time was living in Brindabella some 100 km away, made the journey by horse and sulky to her parent's home, the Lampe Homestead, to give birth. It is possible to drive across the mountains from Tumut to Brindabella on a road that has changed little from those times.
In Bridle Street there is a cairn and the Miles Franklin Memorial Park commemorating the fact that Talbingo was Franklin's birth place.
The Talbingo Library, named the Miles Franklin Memorial Library, has an album compiled to preserve a pictorial record of Miles Franklin's life. It is part of the local school and is open on Tuesdays from 9.00 am - 5.00 pm. tel: (02) 6949 5344.

The Interdenominational Church - The Church of St Paul
On 5 February, 1965 the Snowy Mountains Authority wrote to all the relevant religions explaining that they were building a construction town named Talbingo and land had been set aside for a church. By June that year the Anglican, Roman Catholic and Uniting churches had agreed to coordinate and create a combined church building. A constitution for this unique church was accepted in January, 1966 and the church was completed by 12 April, 1967 at a cost of around $80,000. It was dedicated on 23 April, 1967. When the Snowy Mountains Authority left the township in 1991 the church was handed over to the Anglican Bishop of Canberra and Goulburn; the Archbishop of the Roman Catholic Church of Canberra and Goulburn; and the Moderator of the Uniting Church of Australia. The cost was $10.00 but legal fees had to be paid by the churches. It is now known as the Church of St Paul Talbingo Incorporated. The church is well worth visiting. It has a superb view beyond the altar across the Jounama Pondage and can proudly claim that it was the first interdenominational church in Australia.

Jounama Pondage
Fishing is only permitted around the edges of the lake which is located in front of the Talbingo township. The Snowy Hydro authority argues that there should be no boating or swimming in the pondage due to "strong and unpredictable currents generated by the Tumut 3 Power Station." For more information check out http://www.talbingofishingclub.com.au/fishing-around-talbingo.

Tumut 3 Power Station
Located 5 km beyond the town is the Tumut 3 Power Station which feeds water, via the Tumut River, into the Jounama Pond. It generates electricity from the waters which flow from Talbingo Reservoir. The water comes down the hill in six pressure pipelines and production of electricity is maximised by pumps in the power station which pump water back up the hill to Talbingo Reservoir during off peak periods. The power station has an operating capacity of 1800 MW making it the largest of all the Snowy Mountains power stations. It was completed in 1973 and upgraded in 2012. There is interpretative signage as well as BBQ facilities across from the power station.

Talbingo Reservoir
The primary function of the Talbingo Reservoir is to store water from the Tumut River to be used for hydro power generation at the Tumut 3 Power Station. When it was built - between 1968-1971 - it was the largest dam in Australia with a capacity of 920,000 megalitres and a surface area of 1,935 ha.
There are boat-launching facilities and a beach area at the spillway. Water skiing and swimming are permitted. It is located 4 km from Talbingo and access is via Murray Jackson Drive. Anglers can expect to catch brown trout, rainbow trout, golden perch, Macquarie perch, redfin and trout cod. For more information check out http://www.talbingofishingclub.com.au/fishing-around-talbingo.

Buddong Falls
Located 20 km from Talbingo, and beyond the Tumut 3 Power Station (sensibly it is a 4WD route), is the Buddong Falls campground with a dry-weather-only road that leads to Buddong Falls where picnic tables, toilets and water are available. The Kosciuszko National Park website describes the four campsites as: "Set amongst tall forests of smooth-barked ribbon gums, choose your spot to pitch your tent before exploring the nearby creek and waterfall. If you’re ready to stretch your legs, Buddong Falls walking track leads to two pretty waterfalls and forms part of the longer Hume and Hovell walking track. During the day, parrots and tree-creepers may be seen flitting amongst the branches. At night, settled in around a campfire, you might glimpse possums and gliders." For more detailed information check out http://www.nationalparks.nsw.gov.au/camping-and-accommodation/campgrounds/buddong-falls-campground?gclid=CNymq_LXttECFU1wvAodgrAChg&gclsrc=aw.ds.

* Prior to the arrival of Europeans the valley was inhabited by people from the Ngarigo Aboriginal nation.

* The ex-convict William Bridle settled in the valley in 1848.

* In 1866 Bridle sold out to Oltmann Lampe who was Miles Franklin's grandfather.

* In October, 1879 the novelist, Miles Franklin, was born at the Lampe Homestead. Her mother made the trip from Brindabella to the family home. Lampe's property was known as Talbingo Station.

* By the 1940s Talbingo Station had been sold by the Lampe family to the Day family.

* In 1967 the town saw the consecration of the first interdenominational church in Australia.

* Much of Talbingo Station was drowned by the filling of the Jounama Dam in 1968.

Talbingo doesn't have a Visitor Centre. For all information check the Tumut Region Visitor Centre, The Old Butter Factory, tel: (02) 6947 7025

Talbingo has limited eating. The supermarket has takeaway food and there are Chinese and Australian meals at the Talbingo Country Club. Check http://www.visittumut.com.au/eating-and-drinking.aspx?lv.town=2779 for hours and locations. 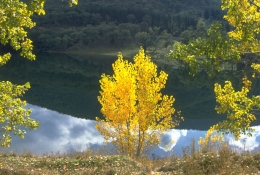 In autumn the colours beside Jounama Pondage take the breath away. 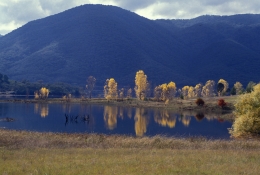 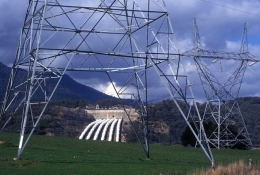 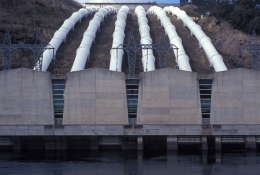 Tumut T3 Power Station pumps water back up the hill in the offpeak periods. 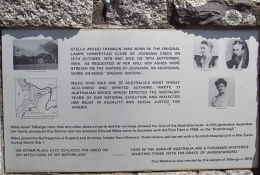 The plaque on the cairn at the Miles Franklin Memorial Park.