Talbot is an historic gold mining town which lies between Clunes and Maryborough. The town's website describes it as "a living ghost town" but this is not correct. Certainly time has stood still, and it is a fine reminder of what a gold mining town was like in the mid-nineteenth century, but it still has excellent accommodation and a couple of good eateries. It also has a number of art galleries. There are some excellent Aboriginal artefacts nearby and the town has a rich collection of interesting, historic buildings.

Talbot is located 158 km north-west of Melbourne. It lies midway between Maryborough and Clunes.

The settlement was originally known as either Daisy Creek or the Back Creek diggings. In 1861, after a visit by the Victorian Governor, the name was changed to Talbot possibly as a compliment to the Talbots of Malahide Castle, Dublin or the Talbots of Shrewsbury, England. No one is certain.

Arts and Historical Museum
Located at Camp Street, in the former Primitive Methodist Church (1870), the Talbot Arts & Historical Museum is open on Sundays from 1.00 pm to 4.00 pm, on Tuesdays and Wednesdays from 10.00 am - 4.00 pm, or by appointment. The museum comprises the Communications Museum, Dunach School No1412, Amherst Hospital Isolation Ward and the Talbot Arts & Historical Museum. These four museums contain photographs, maps, paintings, exhibits and family histories which record aspects of the working like, domestic needs and leisure activities of the people in the early goldfields in the Talbot region, tel: (03) 5463 2167. Check out http://visittalbot.com.au/attractions/museums-history.
Outside the museum is a plaque which explains the history of the Primitive Methodist Church "Designed and built in 1870 by local builders and tradesmen. This distinctive Romanesque design bluestone church served a local population where more than half the workforce was involved in surface or deep lead underground mining. The church closed with the declining population in the early 20th century and later became a clothing factory. In 1984 the building reopened as the Talbot Arts and Historical Museum as the focal point for the town and district's history."

Walking Tour of Talbot
There is a map of the town with the historically important locations marked on it. It is available from the Talbot Arts and Historical Museum. The town's historic buildings include the former Wesleyan Church, the railway station, the town hall, the ANA Hall, the former Union Hotel, St Michael's Anglican Church, the former flour mill, the fire brigade engine house, the post office, the Soldiers Memorial Park, the former courthouse (1866), the Court House Hotel (1860) and the former Bull and Mouth Hotel, which is an 1860s bluestone structure in Ballarat Street.

Of particular interest are:
* the Former Wesleyan Church (1862-1863) which is now the oldest church in the town.
* the Australian Natives Association Hall in Ballarat Street, next to the town hall, which dates from the early 1900s.
* the former Bootmaker, corner Ballarat Street and Scandinavian Crescent, built by Joseph Burdess in 1862.
* The former Bull & Mouth Hotel, now Chesterfield House B&B (see https://www.chesterfieldhousebandb.com.au), 2 Ballarat Street North, was built of local basalt in 1865 by William Owen.
* former drapery, Scandinavian Crescent and Camp Street. This unusual shop and attached residence was built about 1861-1882. Originally a drapery and later a tea house, by 1919 it was Weilandt’s store.

Aboriginal Sites - Bull Gully Rock Wells and a Maternity Tree
Shelter Tree or Maternity Tree
Located about 1.5 km out of town - head north on the Ballarat-Maryborough Road, turn left in Pollocks Road and the tree is about 300 metres along with a small sign beside it. The Visit Talbot website (see http://visittalbot.com.au/attractions/indigenous-heritage) records: "The Aboriginal Maternity Tree is a giant River Red Gum, estimated to be about 700 years old ... It has a 15 metre girth and its hollowed out centre was used as a shelter by ... Dja Dja Wurrung women giving birth. It is recorded as a Significant Tree on the Register of the National Trust."

Bull Gully Rock Wells
Located on the edge of Maryborough - Drive north on the Ballarat-Maryborough Road for around 12 km, turn right into Lean Street, cross over the railway line, turn right into Stoneham Drive, left into Wells Road and, after 2 km, take the signposted track left and the wells are 200 metres ahead. There are four rock wells which have been dug into the sandstone. The Visit Talbot website notes: "The narrow mouths of the wells serve to reduce evaporation and pollution by wind borne debris, and local residents say the wells have never been known to dry up.  The maximum depth of the wells is about 130cm and they have a capacity of approximately 160 litres.  The wells are regarded as among the best examples of their type in Victoria."

Amherst
Located 5 km north-west of Talbot, Amherst was a rich gold mining town in the late 1850s. It was situated in the middle of a reef of gold which was 11 km long and 1.5 km wide. It was surveyed in 1855 and shortly afterwards had seven general stores, an inn, and a hospital. It is now virtually deserted but the grid layout of the town is evident (the basalt culverts can still be seen); early mine workings are evident in the surrounding forests; and the cemetery offers a fascinating insight into the lives of the early residents. A map is available from the Talbot Arts and Historical Museum.

* Prior to the arrival of Europeans the district was home to the Dja Dja Wurrung Aboriginal people.

* In 1836 Major Thomas Mitchell passed through the area on his Australia Felix journey.

* The first European settler in the area was Alexander McCallum who established a pastoral property in 1839 which he called 'Dunach Forest'.

* The nearby towns of Amherst and Daisy Hill developed on the 'Glenmona' run which was in existence by 1840.

* It is said that a shepherd, Thomas Chapman, discovered gold at Daisy Hill (7 km north of Talbot) in 1848.

* The first rush to the district occurred at Amherst, 5 km north of Talbot, in 1852.

* The township of Daisy Hill emerged in the 1850s due to its location on the main route from Adelaide to the goldfields around Castlemaine.

* Gold was first found at Back Creek in 1854 and a settlement began to emerge on the diggings which was also known as Back Creek.

* By 1855 there were about 15,000 people on the field at Talbot with five banks, possibly 49 drinking establishments, a brewery, and numerous stores and businesses scattered along six streets. This year saw the arrival of Chinese miners in the district.

* A National School was built in 1858. That same year saw the construction of a reservoir.

* After the 'Scandinavian' rush of 1859 a survey of Talbot was carried out. At the time it was known as Back Creek. That same year a gas works was built.

* After a visit by the Governor of Victoria in 1861 the name was changed in honour of an English peer named Talbot.

* Cohn Brothers soft-drink manufacturers of Bendigo was founded at Talbot in 1861.

* Wesleyan and Presbyterian churches were built in 1863-64.

* In 1869 the Prince Alfred Government School was opened.

* In 1875 Amherst was renamed Talbot borough. That year the railway station for the Ballarat to Maryborough line was built in the town.

* There was a brief revival from 1933 to 1940 when one of the old mines at Caralulup was reopened.

There is no official visitor information centre in Talbot. Brochures and local information is available at the Talbot Arts & Historical Museum is open on Sundays from 1.00 pm to 4.00 pm, on Tuesdays and Wednesdays from 10.00 am - 4.00 pm, or by appointment.

There is an excellent local website. Check out http://visittalbot.com.au. 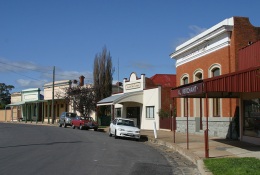 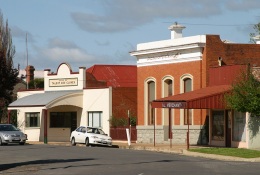 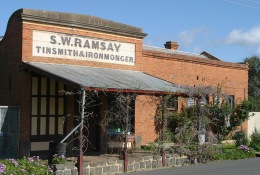 The old tinsmith and ironmonger’s shop 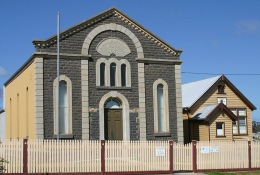