'The Town That Moved' - relocated in 1956 when the original was drowned under Lake Hume.

There are two Tallangattas. The "Old Town", which is now nothing more than signage and a lookout beside the Murray Valley Highway, was physically removed from the Murray River valley when the Hume Weir was built in the 1950s. The transfer of the town was completed on 29 June 1956. Thus the second Tallangatta came into existence 8 km to the west. It is a rarity - a 1950s Australian suburb - with no buildings of historic interest. A modern service centre with a range of services and an impressive new Community Centre.

Tallangatta is located 363 km north-east of Melbourne via the Hume Highway and Murray Valley Highway, 230 metres above sea level and 41 kilometres east of Wodonga.

The town is named after the Tallangatta pastoral run. It is believed the word "tallangatta" is a local Aboriginal word for kurrajong trees.

Tallangatta Lookout
Tallangatta Lookout, which is located on the Wodonga side of town and clearly signposted, offers excellent views over the Hume Reservoir valley. During periods of drought the dam will dry up to a point where it is possible to see the outline of the old town

Old Tallangatta Lookout - The 'Old Town'
Old Tallangatta is located 7 km to the east of the present township. There are a number of plaques on the side of the Murray Valley Highway and a viewing site which is located above the Wodonga to Cudgewa Railway which is now a pleasant walking-cycle path. Although the town is now under water (apart from periods of extreme drought) there is a map at the lookout which clearly identifies the streets and buildings of the town.

1950s Housing
There is no enthusiasm for 1950s Australian suburban housing ... yet. But when (and if) it comes back into fashion, Tallangatta is going to be a model. It was created in the mid-1950s and it is like a timewarp destination with houses that belong to that period. It is worth driving around the streets. You will feel as though you have stepped back sixty years.

Mount Granya State Park
Mount Granya State Park is a 6,140-ha reserve of steep, rocky slopes and plateaux dominated by open eucalypt forests. It stretches from the Murray Valley Highway to the Murray River.
It lies 16 km east of Tallangatta and north on the Granya Road. The Park's major attractions are the summit of Mt Granya (870 m) where there are picnic facilities, panoramic views and a 400m Lyrebird Walking Track (the call of the lyrebird can often be heard) and the Cottontree Creek Picnic Area where there is a short walk (1.4 km return) to the nearby Granya Falls. Open eucalypt forest grows on the steep slopes and plateaux of the park. For more information and a downloadable map check out http://parkweb.vic.gov.au/explore/parks/mount-granya-state-park.

Mt Lawson State Park
Mt Lawson State Park (13,150 ha) is known for its steep slopes, cliffs and rocky bluffs. It supports a diversity of fauna (the barking owl, kangaroos, wallabies and wombats) and flora (approximately 278 native plant species). In spring there is a spectacular wildflower display. There are a number of walks including a Summit Loop Nature Trail (1km), the Conic Range Walking Track (1.5km return to an outcrop of granite boulders), the Koetong Creek Walking Track (to a swimming hole - 4km return) and the challenging 14km return walk to Flaggy Creek Gorge.There is a downloadable set of park notes. Check out http://parkweb.vic.gov.au/__data/assets/pdf_file/0006/315609/Park-note-Mount-Lawson-State-Park.pdf.

* Prior to the arrival of Europeans the area was home to the Jaitmatang and Pallanganmiddang Aboriginal people.

* By 1838 Europeans had established the Tallangatta pastoral run in the district.

* The original town became known as Tallangatta in 1854.

* On 2 April 1865 when 'Mad Dan' Morgan, a notorious bushranger, crept into the tiny settlement on a moonless night and stole a racehorse.

* A local school was established in 1871. That same year a post office was opened.

* By the 1880s tin was being smelted at Koetong to the east of the town.

* In 1889 an Athenaeum and both the Methodist and Presbyterian churches were built.

* The railway was extended from Wodonga in 1891. That same year a Shire Hall was built in the town.

* In 1916 the River Murray Commission decided that Lake Hume should be built at the junction of the Murray and Mitta Mitta Rivers.

* By 1936 the Hume Dam had been completed and the town had not been drowned by the dam waters.

* The original Post Office was renamed Tallangatta East in 1955.

* Tallangatta was physically removed from the Murray River valley when the Hume Weir was built in the 1950s. The transfer of the township by the State Rivers and Waters Supply Commission to the new site five miles (8 km) to the west was completed on 29 June 1956.'

* In 1961 the last train carried passengers on the Wodonga to Cudgewa line.

* In 1997, when the waters of the Hume Reservoir had reached an unprecedented low level, it was still possible to make out, quite clearly, the streets and to see the remnants of the old buildings.

* In 2014 a Community Centre with a library, IT portals, health and a kindergarten was opened.

There is no specific website for Tallangatta but there are a number of websites focussing on bicycle riding through the area and the various activities in and around the town. Check out http://www.snowyvalleysway.com.au/f.ashx/Towong.pdf and https://www.bicyclenetwork.com.au/general/bikes-and-riding/11196. 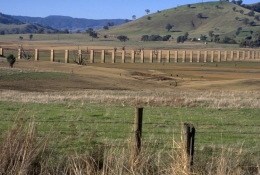 An old bridge exposed by the falling waters of Lake Hume. 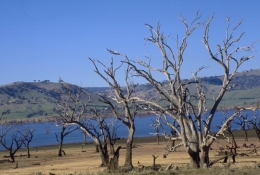 Trees exposed during a drought which lowered the level of the Hume Weir. 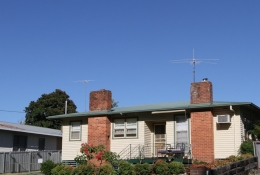 A typical 1950s style house - most of the house in Tallangatta dates from this period. 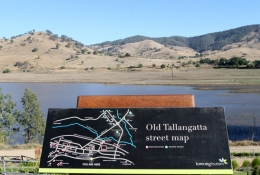 The map of the Old Town at the Old Tallangatta Lookout.

The High Country Rail Trail at the Old Tallangatta Lookout.