Tammin is a typical wheatbelt town with huge wheat silos (constructed in 1960 they were the first concrete silos built in Australia), a railway line on one side of the road and the faithful old Tammin Hotel and a few shops on the other side. The main point of interest is the Tammin Hydrology Model which explains the huge problem of wheatbelt salinity.

Tammin is located 180 km east of Perth via Northam and the Great Eastern Highway.

It is believed that Tammin derives its name from the "tammar" or "tammar wallaby", a small wallaby which was the first Australian marsupial ever sighted by Europeans. The name of the town is taken from an Aboriginal name for Tammin Rock which was recorded by Europeans in 1864. The rock probably takes its name from the animal although one source claims it means "a grandmother or a grandfather".

Hunt's Well
Located 4 km south of the town via Ralston Road, and clearly signposted, Hunt's Well may seem to be a strange relic of the past but it was essential and helped open up this wheatbelt area. Hunt dug vital water holes which offered survival for both stockmen and for the gold prospectors who came through the area on their way to Kalgoorlie and Coolgardie. Before the arrival of O'Connor’s pipeline Hunt's wells were the major source of water in the area. The plaque beside the well explains: "When explorer Charles Hunt first passed through this area on March 17th, 1864 during his first expedition east of York, he used the native well at Tammin Rocks. In February 1865, during his third expedition, a construction party consisting of six pensioner soldiers and ten convicts, stoned up this well."

Tammin Hydrology Model
One of the greatest threats to the Western Australian wheatbelt is salinity. It turns useful land into useless salt-dense drylands. The valuable Geocaching website (https://www.geocaching.com/geocache/GC78XN7_wst-tammin-hydrology-model?guid=4d2ba7d9-990d-4363-9c1f-39983e014a55) explains: "Over 1 million hectares of agricultural land in the south-west of Western Australia has been severely impacted by dryland salinity. It threatens a further 2.8 to 4.5 million hectares of highly productive soils across the south-west of WA. Lost agricultural production due to dryland salinity costs over $344 million each year. Most salt has come from the ocean, transported into the Wheatbelt by wind and rain over thousands and thousands of years, then accumulating in the soil. Without a water table, most salt remains within the soil.  Widespread clearing of original vegetation has reduced plant water use and caused water to build up in the ground, raising the water table.  As the water table rises, it dissolves the soil salts bringing this stored salt to the surface." Located at the excellent amphitheatre, through the park on Dannan Street and behind Tammin Hall, is Kadjininy Kep, or the Tammin Hydrology Model, a working model depicting a typical Wheatbelt landscape with farmland being lost to dryland salinity.

Yorkrakine Rock
Located 26 km north of Tammin, Yorkrakine Rock is a substantial granite outcrop rising 341 metres and covering 160 hectares. It is a popular place for picnics and bushwalking. A strip of native flora surrounds the rock making it particularly impressive with the spring wildflowers.

Wildflowers at the Charles Gardner Nature Reserve
Located 14 km south of Tammin, Charles Gardner Nature Reserve, which is 799 ha of natural vegetation, contains a wide variety of wildflowers some of which are unique to the region. Gardner was the Government Botanist and the nature reserve is important as an area for sandplain flora especially the rare Casuarina fibrosa. There is extensive information in the downloadable brochure - Wildflowers in the Eastern Wheatbelt. Check out http://www.tammin.wa.gov.au/Profiles/tammin/Assets/ClientData/Document-Centre/Wildflowers_in_the_Eastern_Wheatbelt_-_2016.pdf.

* The famous wheatbelt explorer and well digger, Charles Cooke Hunt, of whom John Forrest is supposed to have remarked 'Will I ever find a place where this man has not been before me', camped at Tammin Spring on 12 July 1864.

* In 1865, as he passed through the area, Hunt constructed a well. His diary entry for 4 March records: 'During the early part of the day the working party engaged sinking well - having made a hole about 10 ft long by 7 ft broad and 6 ft deep - by noon we obtained a plentiful supply of water for travelling purposes.'

*The first settler, John Packham, a Sussex farmer who had arrived in Australia in 1888, settled in the area in 1893.

* The railway to Southern Cross passed through the settlement in 1895.

* The  arrival of the Coolgardie water pipeline brought reliable water to the town in 1902.

* The local Agricultural Hall was opened in 1911.

* In 1948 the Tammin Road Board was established.

* The first concrete wheat silos in Western Australia were built in the town in 1960.

* In 1961 the Shire of Tammin came into existence.

* In 1985 the Tammin Landcare Group was formed to reverse land degradation.

* In 1987 the local community purchased the hotel and garage.

There is no Visitor Information Centre in Tammin. There is an information bay in the main street.

There is a useful local shire website. Check out http://www.tammin.wa.gov.au. 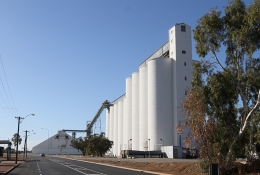 The wheat silos dominate the townscape 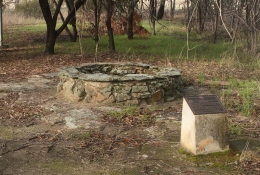 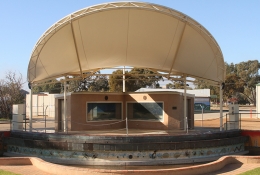 The Tammin Hydrology Model is located in this amphitheatre 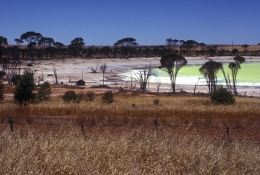 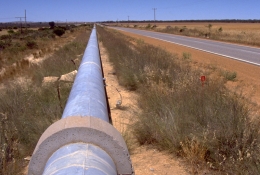 The water pipeline from Mandaring to Kalgoorlie near Tammin