Stopping point and famous road through the Tanami Desert.

In recent times two events have drawn national and international attention to the Tanami Track and the Aboriginal community at Yuendumu. The first was the murder of English tourist Peter Falconio near Barrow Creek. On the night of 14 July 2001 Bradley John Murdoch stopped a VW Combi van driven by Falconio, persuaded him to leave the vehicle, shot him, tied up his girlfriend Joanne Lees who, miraculously, managed to escape, hide in the scrub along the highway, and was eventually picked up by a truck driver who took her 13 km south to the Barrow Creek pub where the police were alerted. Murdoch argued, dishonestly, that he had been nowhere near Barrow Creek, because he was running drugs from South Australia to Broome and his route included the long, monotonous, dirt road that is the Tanami Track - a thousand kilometre short cut to the Kimberley across the desert. The journey is broken only by a petrol stop at the Aboriginal community of Yuendumu 293 km north of Alice Springs and a stop at the now-closed Rabbit Flat Roadhouse which reputedly was the most isolated pub in Australia. The second has been the on-going problems in the Aboriginal community at Yuendumu - an on-going conflict between families within the settlement - which reached such a point of tension that large numbers of the community actually decamped to South Australia to escape the violence.

Tanami is located on a dirt road 644 km northwest of Alice Springs and 403 km south-east of Halls Creek.

Tanami is a Warlpiri word which should be pronounced 'Janami' or 'Janampi'. It appears to have no particular meaning.

Yuendumu Art
In recent times Yuendumu has become famous for its excellent indigenous art. Many of the women (it is mostly women) have become famous and the art has been seen as a superb way of developing the local, fragile economy. Known as the Warlukurlangu Artists of Yuendumu, their shop is open from 9.00am-4.00pm Monday to Friday, tel: (08) 8956 4133. It is worth visiting. There are literally hundreds of canvases on display and there is no substitute for seeing the works in the place where they were created.

The website explains the art as follows: "The art from Warlukurlangu Artists has become recognized for its bold use of colour. The paintings tell the story of the artists connection to their country, the features of the landscape, the plants and animals that are found there and the creation myths that occurred in the Dreamtime. These stories are still very relevant to the artists today. Artists have their own particular styles or colour palettes, and are constantly experimenting, so the works are constantly evolving. There are paintings in many sizes, by both established and emerging artists and there are paintings to suit every budget."

The shop and gallery are located in the town and known as the Warlukurlangu Artists Aboriginal Corporation. Check out http://warlu.com/ for more details and examples of the remarkable work produced at the township.

Tanami Desert Wildlife Sanctuary
Previously known as the Tanami Desert Wildlife Sanctuary this vast area (it covers about 3,752,900ha and lies 220 km west of Tennant Creek) is now administered by the Warlpiri and Kartangururru-Kurintji Aboriginal people as a result of a successful landrights claim in the early 1980s. The Tanami Desert is an area of interest to scientists as it is rich in fauna and "possibly forms a last refuge for a number of small Australian mammals feared extinct: including the desert bandicoot, the burrowing bettong and the golden bandicoot. Recent surveys failed to find evidence of a third of the mammal species known from the Tanami earlier this century. Of particular importance are two colonies of mala, the only populations of mala remaining on mainland Australia. Good populations of bilby occur in the Tanami, as does the secretive and poorly known Spinifex Bird and the endemic tit." For more information check out http://www.environment.gov.au/cgi-bin/ahdb/search.pl?mode=place_detail;place_id=125

Wolfe Creek Meteorite Crater National Park
It is not recommended that anyone planning to visit Wolfe Creek watch the movie Wolf Creek. It is a true outback horror experience and is not designed to build up confidence in anyone taking the Tanami Track. However a trip to Wolfe Creek is definitely worth the effort. The crater is located 151 km south of Halls Creek. The crater was known to the local Djaru Aborigines who called it Kandimalal. Europeans named it Wolfe Crater after Robert Tennant Stowe Wolfe, a digger and storekeeper who lived in Halls Creek in the late 1880s. F. Reeves, N. B. Sauve and D. Hart were the first Europeans sighted the crater while carrying out an aerial survey in 1947. Later that year they reached the crater by land.

Most sources now claim that Wolfe Crater is the second largest meteorite crater on earth (the other being in Arizona) with a diameter of 853 metres and a depth of 61 metres. There is evidence that when the meteor hit, probably about 300,000 years ago, the hole it made was probably as much as 200 m deep. The hole has slowly been filled in by erosion. Viewed from the distance the crater appears as a low hill but when the rim of the crater is reached it is a sight of great symmetry and beauty.

* Before European settlement the Warlpiri people had inhabited the area for tens of thousands of years.

* It wasn't until 1900 that Alan Davidson found gold in the area. A small mining town grew up and by 1908 there were over 200 fossickers but the conditions were so harsh, and the local Aborigines so unfriendly, that few miners persisted.

* In 1932 more gold was found at The Granites (94 km to the south) but the harshness of the summers and the lack of reliable water were major obstacles. Since then The Granites gold mine has opened and closed according to the fluctuating price of the precious metal.

* A miner named C. H. Chapman worked out how to make money from the area and duly brought in bore equipment, found reliable underground water, bought up a number of mining leases, constructed a gold battery and successfully mined the area before selling up in the early 1950s.

* In 1946 Yuendumu was established as a government settlement with 150 Warlpiri people from the area known as The Granites and 120 people from Bullocky Soak.

* By 1990 over 1000 indigenous people were living at Yuendumu and at its surrounding camps.

* In 2010 the Rabbit Flat Roadhouse was closed. 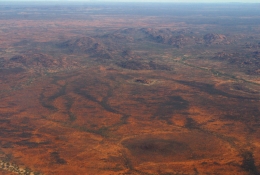 The Kimberley landscape crossed by the Tanami track. 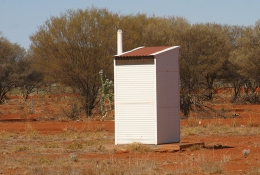 The solitary building at Yuendumu airstrip. 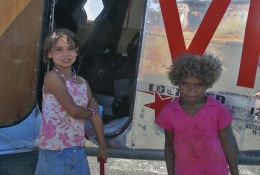 Yuendumu kids greet us at the airstrip.