Historic settlement on the road to Port Arthur

Taranna is a tiny settlement on the road to Port Arthur. Today its central attractions are the excellent and genuinely interesting Tasmanian Devil Conservation Park and the Federation Chocolate factory. Historically Taranna's main claim is that it was the terminus for the infamous human railway which ran between Port Arthur and the jetty at Little Norfolk Bay. This railway carried passengers and supplies from Port Arthur to Norfolk Bay and it was powered by four convicts pushing the carriages along the 7 km track. It had the questionable distinction of being the first railway in Australia. Remnants of the tracks can still be seen in the area.

Taranna is located 86 km south-east of Hobart on the A9.

It is said that 'taranna' is an Aboriginal word meaning 'kangaroo'. This is probably explained by the fact the area was known as a good hunting ground.

Old Convict Railway
There is now very little left of the Old Convict Railway which, when it was operating, involved human power as four convicts were used to push the railway the 7 km from Port Arthur to the jetty at Little Norfolk Bay. It was widely recognised as a particularly cruel punishment. All that is left are remnants of the railway. If you ask at the Tasmanian Devil Conservation Park they are capable of identifying a mound over the road which was once part of the railway. That is all that is left. The Federation Chocolate Factory has a whole section of the Tramway/Railway which can be viewed.

Tasmanian Devil Conservation Park
The Tasmanian Devil Conservation Park was established in 1978 and, at the time, was the first Tasmanian Devil Centre. The park's primary aim is wildlife protection and rescue. It also has an extensive Tasmanian Devil breeding programs. It is possible to see the devils being fed six times a day. Their ability to crush bones in their incredibly strong jaws is something worth seeing. There is also a free-flight falcon display - the "Kings of the Wind" - and it is possible to feed kangaroos, pat wallabies, view eagles and rare hawks and inspect quolls which the park describes as "the devils first cousins."  Check out http://www.tasmaniandevilpark.com/ for details. There are feeding displays throughout the day with the Tasmanian Devils being fed six times each day.

Federation Chocolate Factory
Located at 2 South Street, Taranna the Federation Chocolate Factory combines a chocolate factory with a museum celebrating the local convict history. At 11 am each morning it is possible to watch the fine handmade chocolates being made. The Federation Heritage Museum offers an insight into the Tasman Peninsula’s convict history, saw milling and blacksmithing industries with displays of historic artefacts, photographs and memorabilia. There is a particularly beautiful and impressive timber table made from a huge tree. Tel: (03) 6250 3435 or check http://www.federationchocolate.com.au. Entry is free and it is open Monday - Friday, 9.00 am - 5.00 pm. They have a stall at the Salamanca Markets on Saturdays.

The Norfolk Bay Convict Station
The town's most significant building from the convict era is Tasman's Inn which dates from around 1842. Located at 5862 Arthur Highway, it has been variously called Tasman's Lodge or the Norfolk Bay Convict Station. It is a red and white-roofed  building on a side road which was built by convicts out of bricks which were brought to Taranna from Port Arthur. The building has had a chequered history. It was originally the Commissariat Store which was specifically built to hold stores which were landed at the Taranna jetty and pushed along the railway to Long Bay. When Port Arthur closed in 1877 the store was converted into the Tasman Hotel. At the time it was the only hotel on the Tasman Peninsula. In 1913 the hotel became a guest house when it was turned into Taranna Lodge. It also operated as the local Post Office. For more information about Norfolk Bay Convict Station check out http://www.convictstation.com or tel: (03) 6250 3487.

* Prior to European settlement the area around Taranna was the home of the Paredarerme Aborigines who had been in the district for tens of thousands of years.

* By 1838 Taranna became the terminus for the human tramway which ran from Port Arthur to the jetty at Little Norfolk Bay. This railway was designed to carry passengers and supplies and was powered by four convicts who pushed the carriages along the 7 km line.

* Port Arthur and all the convict-associated buildings closed down in 1877.

Taranna does not have its own visitor information but there is material and advice available at the Port Arthur Historic Sites Visitor Centre, Arthur Highway, Port Arthur, tel: (03) 6251 2310.

There are no specific websites for Taranna. 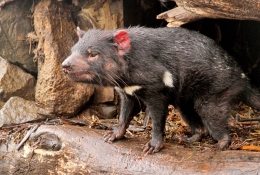 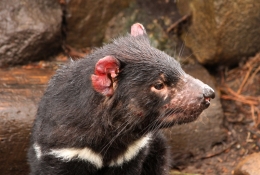 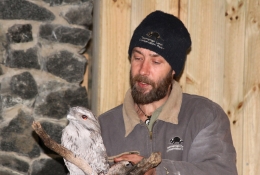 Feeding time for the Tawny Frogmouth at the Tasmanian Devil Conservation Park. 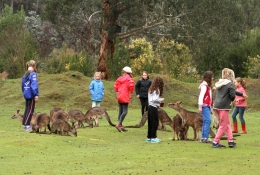 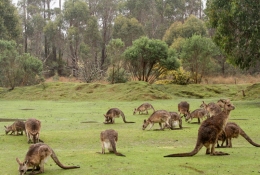 A mob of kangaroos at the Tasmanian Devil Conservation Park. 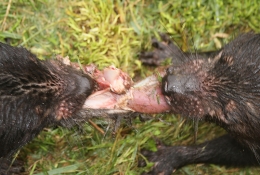 When food is involved two Tasmanian Devils will give no quarter in their determination. The noise and violence is unbelievable. 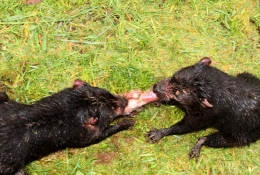 Give no quarter when it comes to food. 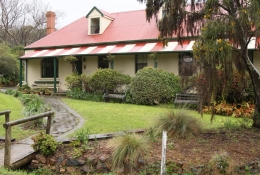