Once a major trucking stop on the Hume Highway, now bypassed.

Located on the Hume Highway 422 km south-west of Sydney and 455 km north-east of Melbourne, Tarcutta is as close to the halfway point between the two capital cities as is possible. Consequently, for most of its life, the small town has been a stopping point for travellers wanting to take a much needed break. In recent times it became a hugely important stop and changeover point for truckies wanting to have a meal and a break before heading off to their destination. In 2011 it was bypassed which has meant that the town is now quiet. The main attraction is the genuinely interesting, and very sad, Truck Drivers Memorial which is a monument to "the memory of truck drivers who have been accidentally killed while performing their duties in the transport industry". There are plans to build a Transport Heritage Centre. Although it is now bypassed many truck drivers still insist that the hamburgers and meals available at the cafe in town are the best on the Hume Highway.

Tarcutta, which is 240 m above sea level, is located on the Hume Highway 422 km south-west of Sydney and 455 km north-east of Melbourne.

The town takes its name from a property which was established in the area in 1839 by Geoge MacLeay. The property was named Tarcuttah. The likely origin of the name is a Wiradjuri word meaning either "grass seed" or "damper made from grass seeds".

Truck Drivers' Memorial
In 1994, when Tarcutta was still a vital stopping point for truck drivers on the Hume Highway, Re-Car Consolidated Industries established a monument to, as the plaque says, "the memory of truck drivers who have been accidentally killed while performing their duties in the transport industry". It was opened by the New South Wales Minister for Roads and Transport and has a plaque commemoration Slim Dusty's iconic trucking song "Lights on the Hill" with the message "The legendary Slim Dusty and Joy McKean are patrons of the The Australian Truck Drivers Memorial Inc. They are eternally honoured for their dedication to country music, enjoyed for decades by Australian truckies, and for their unselfish commitment to this memorial". It is well worth visiting as, like a war memorial, it records far too many deaths and far too many young drivers killed on the roads. For more information and lists of the names on the memorial check out http://www.tarcuttamemorial.com/.

Kyeamba and the Travellers Joy Inn
Further south on the highway is Kyeamba. The first European to occupy the Kyeamba area was John Smith who, by 1839, had constructed a bark hut and had 30 acres were under cultivation. His homestead, located close to the Hume Highway, was converted to an inn, known as the Traveller’s Joy, later also known as the Traveller’s Rest and later still as Kyeamba Inn. The mounted police had an office in Kyeamba in the 1850s. Kyeamba acquired some notoriety in the 1860s when the bushranger 'Mad Dan' Morgan decided that the Travellers Joy Inn was a suitable stopover for a hungry and thirsty bushranger. The inn, which is now a private property, can be seen on the right hand side of the road (if you are travelling south) about 4.5 kilometres south of Kyeamba.

Tarcutta Hills Reserve
Established in 1999 and located 15 km south of Tarcutta the 432 ha Tarcutta Hills Reserve is owned and managed by Bush Heritage Australia. This reserve provides an important remnant of white box woodland with a relatively untouched grassy understory: a last refuge for endangered birds like the Swift Parrot, the beautiful Squirrel Glider and as many as 11 other threatened wildlife species including turquoise parrots, brown tree creepers, superb parrots, speckled warblers, black-chinned honey eaters, hooded robins and diamond firetails. It is known that at least 82 bird species use the area. The site is listed on the Register of the National Estate. It protects squirrel gliders, the spotted grass frog, tree skinks, small-leaf bush pea, cypress pine, mugga ironbark scribbly gum and red stringybark red box. Check out http://www.bushheritage.org.au/places-we-protect/state_new_south_wales/reserves_tarcutta_hills for more details.

* Prior to European settlement the area around Tarcutta had been occupied by members of the Wiradjuri Aboriginal language group.

* The area was first explored by Europeans when Hume and Hovell passed through it on their way from Sydney to Port Phillip. On 7 January 1825, near the present site of Tarcutta, they were met by a groupof Wiradjuri people  who had 'begged the travellers would accompany them to their camp so the women and children might have an opportunity of seeing them.'

* By 1835-37, 'Hambledon', a U-shaped slab house was built at Tarcutta. It was the first inn and post office to be built between Gundagai and Albury.

* In 1836 Thomas Hodges Mate settled on land which is now known as Tarcutta. He was searching for cattle which had strayed.

* In 1839 Geoge and Hanen MacLeay established a property in the area which they named Tarcuttah.

* In 1850 Bishop Broughton came through the area and stayed at Thomas Mate's house.

* By the 1880s the locals were actively lobbying to get a branch line through Tarcutta and on to Tumbarumba.

* In 1890 Tarcutta was officially proclaimed as a village.

* In 1987 the branch railway line from Tarcutta to Tumbarumba was closed.

* In 1994 the Australian Truck Drivers Memorial Wall was established and funded by Recar "in memory of truck drivers and those directly related to the industry who have lost their lives".

* In 2011 Tarcutta was bypassed. It was one of the last stretches of road on the Hume Highway to be turned into dual carriageway. 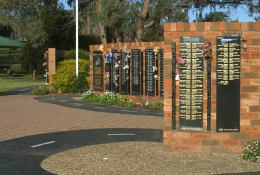 The Truck Drivers Memorial with the names of drivers who died while driving. 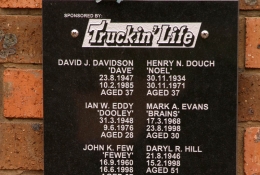 There are panels which record the deaths with stark simplicity. 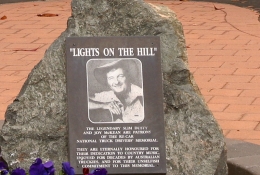 The plaque to Slim Dusty - a hero to the truckies. 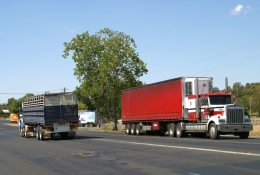 Tarcutta before the bypass - a major truck stop on the Hume. 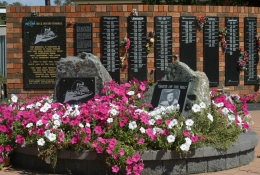 The Truck Drivers Memorial with a special plaque to Slim Dusty.