Although not as widely known as famous goldrush towns like Clunes or Maldon, Tarnagulla still contains the essence of the appeal of a goldrush town. It has buildings which now, long after the goldrush, seem out of proportion to the size of the small town. It is surrounded by mullock heaps (they look like little molehills in the middle of the surrounding eucalypt forests) where miners furiously dug into the earth hoping to find their fortune. It has ruins that hint at former glories and it has strange incongruities - a pavilion and rotunda - which hint at a time when the residents believed it would always be a substantial township.

Tarnagulla is located 186 km north-west of Melbourne and 47 km west of Bendigo.

Historic Buildings
Tarnagulla is a genuine wonderland of historic buildings. The most sensible approach is to simply mooch around town admiring the solidity of buildings, most constructed in the 1850s and 1860s and designed to last for hundreds of years. Most buildings have a small blue plaque outside which provides useful historic details. The town's streetscape is a charming mix of veranda-fronted shops and  solid banks and churches. Check out the Victoria Hotel and Theatre (1853) (a dance hall and vaudeville theatre which remained in use until the 1930s), the Courthouse (1863), Uniting Church (1863), St Saviours Church of England (1864), ruin of the Wesleyan Methodist Church (1864) which held a congregation of 300 parishioners - nearby is a marker recording the site of the Poverty Reef gold discovery. The Old Union Bank (1859) which operated until 1942; National Bank (1859) and old Colonial Bank (1866) with its distinctive chimney which dates from a time when the bank smelted its own gold. The bank proudly advertised: 'Gold melted on the premises in the presence of the owners free of charge.' If you want greater detail on the buildings and the history the http://home.vicnet.net.au/~tarnagul is outstanding.

Tarnagulla Historic Reserve
Just beyond the main street (to the west) at the end of Wayman Street is the Tarnagulla Historic Reserve . It features a timber pavilion (1884 - restored 1989) which is listed on the Historic Building List as the oldest in the state and a rotunda (1886 - restored 1988). There is an interesting historic sign recalling the golden days of the 1870s and 1880s when the area was used by the whole town for a special New Year's Fete.

Activities
Tarnagulla is surrounded by attractive eucalypts with distinctive mallee and yellow gum communities at the Tarnagulla Flora Reserve. It is a pleasant spot for bushwalking and gold fossicking. Ask around town for a map.

Forgotten Places
There is a short, and excellent, BBC video about Tarnagulla which is worth watching. Check out https://www.bbc.com/reel/video/p08nwwh4/the-abandoned-welsh-town-in-the-middle-of-australia.

* Europeans squatted in the area in the 1840s. One of the first properties was named  'Tarnagulla' station.

* The goldrush in the Tarnagulla district started when gold was found at Sandy Creek in 1852. Up to 5,000 prospectors rushed to the area and a town grew up. It was called Sandy Creek but it was renamed Tarngulla in 1860.

* In 1852-53 a rich pocket of reef gold was discovered. It was named the Poverty Reef by D. Hatt who was wrecked at Poverty Bay in New Zealand and rescued by a Maori woman. Over the next 13 months a staggering 13.5 tons (13.7 metric tonnes) of gold was mined from an area that was only 3 metres wide and 120 metres long. It was reputedly one of the richest deposits of reef gold found anywhere in the world.

* 1870 - the town was prospering to a point where the Borough Council built a swimming pool and granted licenses to locals who wanted to fish in the town reservoir.

* 1894-95 - Duncan, Noyes & co started processing the tailings from the Poverty Reef with cyanide.

* 1906 - years after the initial goldrush the Poseidon nugget, weighing 26.6 kg and named after the winner of the Melbourne Cup, is found.

* In August 2020 prospectors Brent Shanon and Ethan West found two nuggets which weighed a combined 3.5 km and were worth an estimated $AUD350,000.

There is a local website - http://home.vicnet.net.au/~tarnagul/ - with lots of vernacular history about the district. 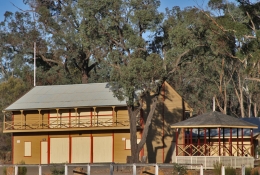 The Pavilion in the Historic Reserve (1884) 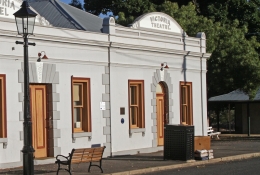 The Victory Theatre and Victory Hotel (1853) 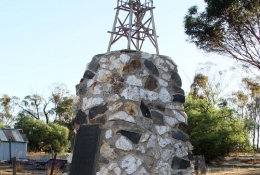 The Poverty Reef memorial near the Methodist Church. 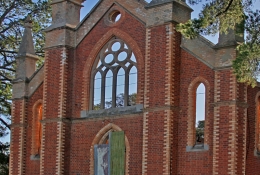 The ruins of the Wesleyan Methodist Church (1864)