Taroom is a quiet town servicing the surrounding rural properties. Its great claim to fame is that when the Prussian explorer, Ludwig Leichhardt, passed through the district he marked a tree LL 44 and that tree subsequently became a standout feature in the middle of the main street.

Taroom is located 464 km west of Brisbane via the Warrego and Leichhardt Highways.

Taroom is probably a corruption of a Yeeman (variously spelt Yiman and Jiman) Aboriginal word 'tarum' meaning 'pomegranite' or 'native lime' (Eremocitrus glauca) which is a thorny tree with orange blossom odour and small fruits that can be used for jam or drinks. Originally the settlement that grew up along the Dawson River was known as Bonners Knob but in 1856, when a post office was built, the official name became Taroom.

Ludwig Leichhardt Memorial
In 1988 Taroom's bicentennial project was a memorial to the explorer, Dr Fredrich Wilhelm Ludwig Leichhardt, born in Prussia on 23 October, 1813. The memorial is a large sandstone slab with three bronze plaques - one of which provides a succinct account of Leichhardt's life and his disappearance in 1848. It is located in the Ludwig Leichhardt Park in Yaldwyn Street east of the Leichhardt tree and down the hill from the Visitor Information Centre. The park was declared "Native Trees Only" in 1999 with the only exception being an Aleppo Pine which is believed to have been seeded from a pine at Lone Pine on the Gallipoli Peninsula. For those interested in flora the park contains, among many others, examples of weeping bottle brush, coolabah, flaxleaf paperbark, lemon scented gum, swamp mahogany and bloodwood.

The Leichhardt Tree
The Leichhardt tree is very clearly marked in the main street. It is no longer possible to see the distinctive LL 44 which Leichhardt carved on the tree in 1844. There are two explanations as to why it has disappeared. Older Taroom residents claim that they can remember seeing LL44 in the tree when they were children. They explain its disappearance simply as a case of the bark growing over the carved initials. A more romantic and entertaining explanation argues that when the bark started growing over the carving a council worker was sent to the tree to chip the bark away. The worker, either not understanding his instructions or taking the job a little too enthusiastically, not only chopped the bark but managed to chip off the LL44 as well. The result: a very healthy tree in the main street with a sign reading "Leichhardt Tree - 1844 - Taroom" and no sign of the distinctive carving. It is still a moment in Australian history that is worth inspecting and recalling. Leichhardt's epic 14-month journey from Jimbour to Port Essington is a remarkable achievement and the tree, even without its carving, is a reminder that he passed this way.

Steel Wings Windmill
On the Leichhardt Highway at the western edge of the town is a rare windmill which was manufactured by the Steel Wings Company in North Sydney some time between 1895 and 1910. A plaque near the unusual structure explains: "The windmill, which supplied water from Kinnoul Creek to the homestead and garden, stood at 'Kinnoul' prior to the station's purchase by the Bell family in 1912. The windmill remained in service until the late 1950s when its timber foundations were destroyed by fire causing it to collapse. Taroom and Jerilderie have the only two known working examples."

Taroom & District Historical Society
The Taroom & District Historical Society Museum is a typical local folk museum which combines local historic materials with a number of buildings from the surrounding area including a blacksmith's shop and boat house. It is also an excellent place to access information about the local area. Located in Kelman Street it is open by request. This is an uncomplicated process which can be achieved either by asking at the Information Centre (they will ring on your behalf) or by contacting one of the following: Greg & Glenys Shearer (mob) 0409 663 701 or Mrs Mavis Clarris (07) 4627 3430.

Chain Lagoons
Fifteen kilometres north of Taroom the Leichhardt Highway crosses Palm Tree Creek. This was once the site of a Native Police barracks. Consequently it is sometimes known as Police Lagoons. The lagoons are worth visiting as they have stands of the rare Livistona cycad palms.

The Hornet Bank Massacre
It is no longer possible to visit the site of the Hornet Bank massacre which is located on private property. Hornet Bank station remains much as it was in the 1850s and near the station is a cairn to the memory of settlers who were killed by the Yeeman. If the arrangement changes the people at the local Visitor Centre will have details.

Isla Gorge National Park
Located 55 km north of Taroom on the Leichhardt Highway, the Isla Gorge National Park is a "spectacular landscape of sandstone cliffs and gorges". The main gorge can be conveniently reached on a 1.4 km dirt road which runs off the main Theodore-Taroom road. Look carefully. It is easy to miss. The road leads to a viewing point where the national park's cliffs and deep sandstone gorges can be viewed. A narrow path leads to a more dramatic viewing point directly above the gorge. The bushwalks through the gorge are meant for experienced walkers only. There are a number of useful information boards near the car park. One of boards points out "loose, crumbly rock makes the descent into the gorge dangerous. Only well-equipped, experienced walkers should enter this part of the park." Another offers detailed information about how to access Flagstaff Hill (it lies to the north) where walkers can see a remnant of the remarkable road from Roma to Rockhampton which was built out of large rock slabs in 1863.

* Prior to European settlement the area around Taroom was inhabited by the Yeeman people who were largely wiped out as settlers moved in.

* The first European to pass through the area was Ludwig Leichhardt who carved his initials in an old coolibah tree on 13 November, 1844.

* When Leichhardt finally returned to Sydney (where he was rewarded with £1000) in early 1846 he was enthusiastic about the fertile soils around Taroom. This caused a minor land boom as people travelled to the area to settle and graze sheep and cattle.

* New settlers moving into the area found that the local Yeeman people resisted their arrival with threats and battles.

* In 1856 a man named Billy Fraser took over the lease of Hornet Bank. On 26 October 1857, while Fraser was in Ipswich, the Yeeman attacked Hornet Bank and killed Fraser's mother; raped and murdered his three sisters; killed his three brothers, and disposed of three other people who were working on the station. Fraser became obsessed with the killing and vowed revenge. Vigilante posses scoured the land and killed any Aborigines they encountered. A more detailed account of this violent episode can be read in my book Blood on the Wattle.

* The town's Leichhardt Hotel was opened in 1858. It was around this time that the local court house was completed.

* Taroom Racing Club was formed in 1874 and the local government division was created in 1879.

* The town grew quite dramatically in the 1890s as the previously large land holdings were subdivided. The Anglican church was completed in 1896; the hospital in 1899 and a new post office was built in 1896.

* the town was severely affected by the flooding of the Dawson River in 2010. The river reached a new height of 10.28 metres and there was extensive flooding to the north, west and south of the town.

The University of Queensland website has extensive information about the early history of the town - see http://queenslandplaces.com.au/taroom. 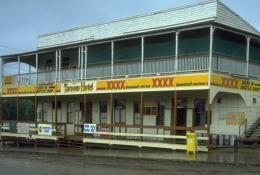 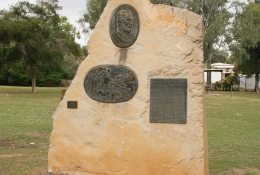 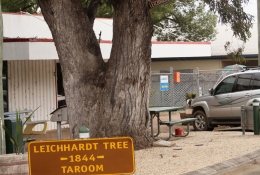 The Leichhardt Tree in the main street of Taroom where in 1844 Ludwig Leichhardt carved his distinctive L into the trunk. 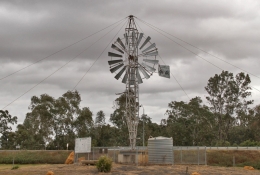