Until the late 1940s - early 1950s the major form of transportation along the New South Wales South Coast was ferry and passenger steamer. There was a daisy chain of reliable all weather wharves where the ships would berth, deliver and pick up goods and passengers, before sailing  further up or down the coast. Tathra is now historically significant because it is the only one of the original coastal steamer wharves remaining. It is a reminder of a time when the sea was the main transport highway up and down the South Coast.

Today Tathra is a quiet holiday destination offering fishing, surfing, swimming and sailboarding on the 3 km-long Tathra Beach while Mongareeka Inlet, the wide sandy mouth of the Bega River, has boat-launching ramps and offers waterskiing, windsurfing and excellent prawning in season.

Tathra is located 424 km south of Sydney via the Princes Highway and the Tathra-Bermagui Road.

No one is sure what Tathra means in the local Yuin Aboriginal language. Some sources claim it means "the place of wild cats" while others argue that it simply means "beautiful country".

Tathra Wharf
Tathra Wharf is a reminder of a time when every South Coast community relied on the sea for their transportation needs. The first wharf was built by the Illawarra Steamship Company in 1860 to meet demands from local farmers who disliked having to haul their produce 25 km south to Merimbula which, at the time, was the closest port. The construction was modified in 1861-62. Holes had to be blasted into the rock so the turpentine pylons, shipped from the North Coast, could be properly anchored. Once completed  there was always the problem of the steepness of the road down to the wharf. Extra teams of animals were needed to drag fully laden carts up the hill. Until 1883 the port was mainly used by sailing ships. That year the Illawarra Steamship Company put a regular steamship on the return journey from Sydney. Typically the cargo shipped from Tathra comprised bacon, cheese, butter, tallow, bark and wool. The wharf was constantly being modified. Extensions occurred in 1873, 1878, 1886, 1889 and between 1907 and 1912 it was extended with a jib crane and facilities to load and unload cattle and horses. In 1914 it was the scene of an emotional public farewell to the district's soldiers who were heading off to the Great War. By 1954 the Illawarra Steamship Company had stopped using the wharf. It deteriorated and by 1973 there was an order for its demolition but local action and support from the National Trust saw its preservation and conservation. Sadly it is now the only coastal steamer wharf remaining on the New South Wales coast. Today it is a popular destination for anglers.
The heritage wharf was badly damaged by heavy seas during the east coast low that hit the coast in June, 2016. That storm generated the largest wave ever recorded off New South Wales. The wharf is one of the last ocean facing timber wharves on the east coast. It's synonymous with Tathra and the Bega Valley, and a hugely popular tourist destination. So the Bega Valley Council is footing a huge repair bill while their insurer is trying to avoid paying out on a claim, and the NSW government is resisted providing financial assistance.

Bournda National Park and Kianinny Bay
Bournda National Park stretches along the coast south from Tathra to just north of Merimbula. It is gloriously quiet and peaceful even in summer holiday times. National Parks and Wildlife provides a list of activities in the park including Bournda Lagoon (for a picnic and ideal for families); Kangarutha Walking Track (9 km one way - 3.5 hours each way, considered a hard walk along the rugged coastline); Sandy Creek Loop Track (6 km one way, 3 hours each way, medium difficulty which includes Bournda Lagoon, Bournda Lake and Sandy Creek Beach); and Wallagoot Lagoon, a 500 ha lake which is suitable for canoeing, sailing, windsurfing, beach and rock fishing, prawning (in season), family swimming in the shallows and, on the southern side of the lake, picnicking at Hobart Beach and Scott's Bay. They are all worthwhile and enjoyable. Check out http://www.nationalparks.nsw.gov.au/bournda-national-park for more details.

Kianinny Bay at the north eastern end of the park is a known fossil site which includes coastline consisting of steep cliffs and rugged rock masses. The park contains a rich variety of birdlife and grey kangaroos, swamp and red-necked wallabies which can be seen grazing on the shores of Bondi Lake in the mornings and evenings.

Mimosa Rocks National Park
Only 5 km north of Tathra, across the Bega River, is Mimosa Rocks National Park which stretches north for 20 km along a strip of coastline which includes beaches, cliffs, rocky coves, offshore rock stacks, headlands, lagoons, lakes and a heavily wooded hinterland, including patches of rainforest. The park was named after the PS Mimosa which ran onto rocks near Aragunna in 1863.

There can be no better place to understand the idyllic pre-European life of coastal Aborigines than Aragunna at the northern end of the park where, on a boardwalk which leads from the car park to the rocks, a series of plaques explain the history of a large shell midden on the edge of a rocky beach. At this location, under the acacias and banksias on a grassy bank above the beach, the local Yuin Aborigines regularly set up camp. Immediately behind the camp is a fresh stream and the nearby rocks are rich with crustaceans, molluscs and fish. A true coastal paradise.

* Prior to European settlement people from the Yuin Aboriginal language group lived in the area.

* The first European to travel up the coast was Captain James Cook in April, 1770.

* The first Europeans to pass through the area were the survivors from the wreck of the Sydney Cove in 1797.  Nine of them died on the journey and only three reached Sydney alive.

* Pastoralists moved into the area to the west of modern day Tathra in the 1820s and 1830s. At the time they were illegally squatting on crown land.

* In 1851 the Illawarra and South Coast Steam Navigation Company was formed. It would eventually initiate the construction of the Tathra Wharf.

* Tathra started life as a small jetty operating as a shipping outlet for a group of local farmers led by Daniel Gowing. Gowing had offered a reward to anyone willing to ship produce from a safe point north of Merimbula. Tathra was chosen because of the shelter it offered from southerly winds and because it was the best site available between Merimbula and Bermagui.

* The small jetty was replaced in 1861-62 by a wharf which was erected from funds donated by local farmers and the Illawarra and South Coast Steam Navigation Company.

* The township was surveyed in 1861. Regular shipping of produce and passengers to Sydney started in 1862. The service became known as the Pig and Whistle line because passengers were expected to share the voyage with pigs and produce.

* The population of the town increased after crown lands were opened up to free selection in 1861.

* The wharf continued to be essential to the area until the early 1950s. There was no railway line beyond Bomaderry. The roads were poor and unsealed. The Princes Highway from Batemans Bay to the Victorian border was still gravel as late as 1940.

The official local website - http://www.sapphirecoast.com.au/the-region/towns/tathra/ - has good information about accommodation in the area. 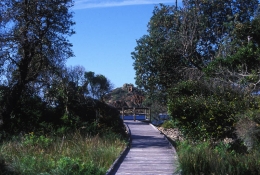 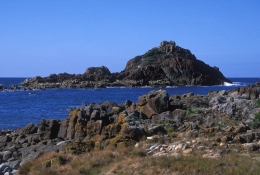 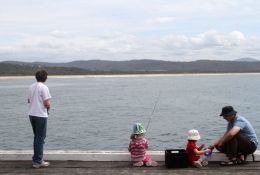 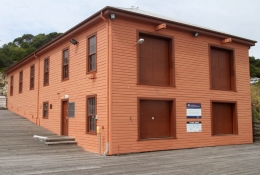 The main building on Tathra Wharf 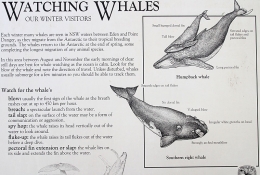 National Parks and Wildlife advice on the best times to watch whales at Tathra. 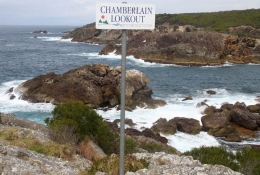 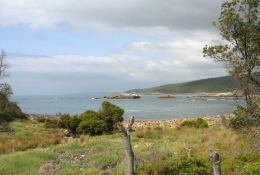 The view south in Mimosa Rocks National Park from the boardwalk at Aragunna. 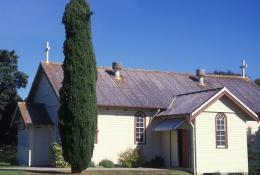 The Catholic Church in Bega Street 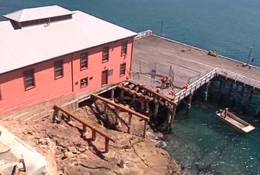 The Tathra Wharf in 2016 after the heavy storm in June that year.