Taylors Arm is really nothing more than a pub, renamed The Pub With No Beer, and a few houses nestled on the banks of the Taylors Arm River, a tributary which joins the Nambucca River at Macksville.

Taylors Arm is located 498 km north of Sydney via the Pacific Highway. It lies 27 km west of Macksville.

Just beyond Macksville the Nambucca River splits into two. The northern section is known as North Arm and the southern section is Taylors Arm. The waterway was named after Taylor and Co. who held a run (a property) which stretched from the present village of Taylors Arm east to Warrell Creek where their head station was located.

The Pub With No Beer
The only hotel in town is the Cosmopolitan Pub [now it has changed its name to the title of the song] which was the subject of the song, 'The Pub with No Beer'. Sung by Slim Dusty it was the first Australian song to reach No.1 in the British pop charts. It is said that Dusty's version recounted the adventures of the regulars who used to drink at this old and isolated timbergetters' watering hole in the 1940s.
It is claimed that the song's origins lie with some verse written by a Dan Sheahan of Ingham in Queensland. One version argues that Sheahan rode into Ingham for a drink during World War II only to find that the local pub, the Day Dawn Hotel, had been drunk dry by American serviceman. His version is very different from the Slim Dusty version.
The song that is well known is usually credited to bush worker and folk singer Gordon Parsons who may well have transformed Sheahan's verse. At any rate it became a national number one in the hands of Slim Dusty.
The Cosmopolitan is now officially called The Pub with No Beer and The Pub With No Beer Festival is held there every year at Easter, tel: (02) 6564 2101.

The Cedar Log
Outside the Pub With No Beer is a huge log which is a quiet indictment of the cavalier attitude of timber cutters in the late nineteenth and early twentieth century. It was cut down far up a valley in the hinterland only for the cutters to realise that it was too big to haul out of the forest. It was only years later that the rotting trunk, with modern equipment, was extracted to end up uselessly lying in the yard at the front of the pub.

* Prior to the arrival of Europeans in the area, the local Aborigines, the Dunghutti, had lived in the area for tens of thousands of years.

* In 1890 a boarding house was built to cater for the timber workers.

* By 1900 the town had a bakery, butchery and grocery store.

* In 1956 Slim Dusty heard Gordon Parsons singing The Pub With No Beer at the Taylors Arm Hotel.

The official website is the Nambucca Valley which has a special entry on Taylors Arm. See http://www.nambuccatourism.com.au/nambucca-valley-region/nambucca-valley/taylors-arm. 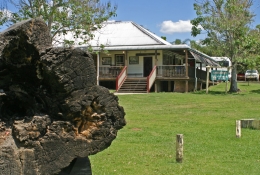 The Pub With No Beer and the huge log outside. 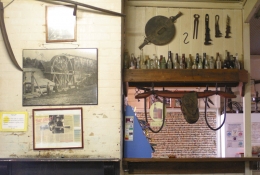 Memorabilia inside The Pub With No Beer 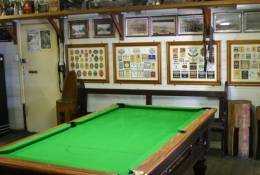 Rustic and Slim Dusty memorabilia in the pub's Billiard Room.