One of the Northern Territory's four important towns.

The Northern Territory has few significant townships. Only Alice Springs, Tennant Creek, Katherine and Darwin can be described as substantial towns and even then Tennant Creek has a stable population of around three thousand. The town is an important stopping point on the Stuart Highway and the first major town reached by travellers crossing into the Territory from Queensland on the Barkly Highway.

Tennant Creek is located 377 m above sea level at a point 25 km south of where the Stuart and Barkly Highways meet. It is 508 km north of Alice Springs and 989 km south of Darwin.

The settlement takes its name from a creek which was crossed by the explorer John McDouall Stuart during his 1860 expedition. McDouall Stuart's named the creek Tennant to honour his friend and sponsor John Tennant, the father of the South Australian pastoralist and politician, Andrew Tennant (1835-1913).

Battery Hill Mining Centre
Tennant Creek's premier attraction is the Battery Hill Mining Centre. It is located 1.5 km east of the town centre via Peko Road. It combines the Barkly Visitor Information Centre with a series of activities which allow the visitor to experience the town's important mining history. There are two museums - the Mineral Museum which includes the McLaughlin mineral collection and the Social History Museum which records the history of the town and its residents as well as guided tours. There is an Underground Mine Tour and the Gold Stamp Battery Tour which centres on the enormous No. 3 Government Stamp Battery which was constructed in the 1940s to crush ore. Although it no longer operates for miners it is still in working order and can be seen in operation on the guided tour which explains in detail the process by which ore is crushed and passed over mercury-coated plates to trap the gold. One of the largest ten-head stamp batteries still working in Australia, its unusual scale reflects the fact that the gold found around Tennant Creek has been predominantly embedded in ironstone rather than quartz. As ironstone is extremely hard conventional crushing devices proved inadequate. It is also possible to pan for gold at the Mining Centre. For further information check out http://www.barklytourism.com.au/attractions/battery-hill-mining-centre.html or tel: 1800 500 879.

Nyinkka Nyunyu Cultural Centre
Through a combination of displays, short films and exhibitions it is possible for the visitor to experience the rich and complex culture of the local Warumungu people. Particularly impressive is the art gallery with its fine example of local art and the dioramas which explain the Warumungu connection to the surrounding land. For more information check out the short video at http://www.barklytourism.com.au/attractions/nyinkka-nyunyu-cultural-centre.html.

Church of Christ the King
The Roman Catholic Church of Christ the King at 57 Schmidt Street has a wonderful story to tell. It was built at Pine Creek in 1904. In 1936, as Tennant Creek was growing and Pine Creek was in decline, it was dismantled and transported south. With an appalling sense of timing the journey coincided with 'The Wet' which meant that the first truck carrying to church made the journey successfully, the second got bogged and overturned at Daly Waters, and the third was forced to return to Pine Creek to wait for the flood waters to recede. This produced the amusing situation of the front door of the church arriving in Tennant Creek, the back door remaining in Pine Creek 763 km up the Stuart Highway, and the side walls being bogged at Daly Waters. The locals, with a suitably droll sense of humour, referred to it as 'The Longest Church in Australia'. It was the first church to be built between Alice Springs and Katherine. Its unusual use of corrugated iron, caneite, masonite and recycled telegraph poles for support stumps make it an unusual and eccentric example of Australian vernacular architecture.

Tuxworth-Fullwood House
Located at 63 Schmidt Street, this National Trust building is now a museum highlighting the history of the Barkly Tablelands. It is of particular interest to anyone with an interest in the military history of the Northern Territory. The Australian Military Force built it in 1942 as part of the 55 Military Camp Hospital and after the war became the Tennant Creek Hospital until 1978. It is only open for two hours a day between May and September. Check out http://www.nationaltrustnt.com.au/properties/tennant-creek for more details.

Overland Telegraph Station
The explorer John McDouall Stuart travelled through Central Australia three times between 1860 and 1862. Part of the point of these journeys was to establish a route for the overland telegraph line which would link Australia to Europe. So gifted was McDouall Stuart that when the telegraph line was completed it closely followed his route through the area. In 1872 a repeater station was built 11 km north of the present town. It used local stone for the walls and corrugated iron for the roofing. It replaced an earlier timber structure, built in 1870 but rapidly destroyed by termites. The repeater station was the first sign of European settlement in the region and was, for many years, the only European structure in the Barkly Tablelands. Consequently it was a common meeting place for drovers, prospectors and others travelling the track from Port Augusta to Darwin. It closed down in 1979 and currently operates as a museum which can be opened with a key obtainable from the Tennant Creek Visitor Information Centre. For more information check out http://www.barklytourism.com.au/attractions/telegraph-station.html. Nearby are the isolated graves of Tom Nugent, a notorious cattle duffer who owned Banka Banka Station and died in 1911 and Archibald Cameron, an employee of the telegraph station who died in 1918.

Phillip Creek Settlement
Further north on the Stuart Highway are the remnants of the Phillip Creek Settlement. In September 1945 nearly 200 Aborigines living around Tennant Creek were relocated to Phillip Creek. It was a cynical move designed to keep them away from the mining sites and to ease demands on the district's very limited water supplies. The Aborigines Inland Mission ran the settlement from 1945-1951. Simple dwellings made from corrugated iron and timber with cement and dirt floors were built. Children were separated and forced to live in dormitories and supplies were shipped in. In 1951 the "inmates' were moved to Warrabi where they remained until it closed in 1956. The abrupt removal allows the visitor to see the harsh conditions which passed for benevolence towards Aborigines in the 1950s.

Attack Creek
Located 11 km south of Renner Springs and 74 km north of Tennant Creek is a monument recording that on 25 June 1860 John McDouall Stuart and his two companions William Kekwick and Benjamin Head, on Stuart's first attempt to cross Australia, encountered hostile Warumungu Aborigines who forced him to turn back. The expedition was also suffering from illness. The site became known as Attack Creek although the memorial does not have any direct connection with the actual location where the altercation took place. For more details check out http://www.parksandwildlife.nt.gov.au/parks/find/tennant-creekbarkly-region/attackcreek#.UZ6kZruXSHk.

Churchill's Head Rock
This is not to be taken seriously. Some 83 km north of Tennant Creek on the eastern side of the Stuart Highway is a rocky outcrop which looks remarkably like the jowly profile of Winston Churchill. Soldiers named it Churchill’s Head during World War II. Some wit has placed a piece of piping where the Churchillian cigar should be although it is quite likely that another wit has removed it. It is known as the Churchill's Head Rock.

The Pebbles (Kunjarra)
Located on a turnoff just past the Overland Telegraph Station, 'The Pebbles' are huge granite boulders located 6 km on a dirt road from the Stuart Highway. This is an area that is rich in wildlife and has significant cultural links for the women of the local Warumungu people. For more information check out http://www.barklytourism.com.au/attractions/pebbles-kunjarra.html

* For an estimated 40,000 years prior to the arrival of Europeans nine groups including the Warumungu, Warlpiri, Kaytetye and Alyawarra people inhabited the area around Tennant Creek.

* John McDouall Stuart was the first European to reach Tennant Creek. He was attempting to traverse the continent from south to north. During his first expedition in 1860 Stuart named the creek after his friend and sponsor John Tennant, a pastoralist from Port Lincoln in South Australia. Stuart made two subsequent journeys through the area.

* In 1872 the Overland Telegraph Line passed through the area and a temporary telegraph repeater station was built. It was the origin of the settlement. Two years later a stone building was completed and settlers started moving into the district. This station, which still stands as one of only four existing Overland telegraph stations, lies 11 km to the north of town. It was closed down in 1979 and currently operates as a museum.

* By the late 1870s gold prospectors were searching for gold throughout the territory. The prospectors had some success around Tennant Creek. In 1879 traces of gold were found in the creeks and gullies south of the telegraph station but there was not enough to encourage any kind of rush.

* In 1926 a prospector named Charlie Windley made a claim on the site which he called the Great Northern Mine. He managed to find enough gold in weathered rock to justify his efforts but this was not enough to encourage any kind of rush to the region.

* Everything changed in 1932 when an enterprising telegraph operator, 'Woody' Woodforde, sought assistance from the local Aboriginal community. One man brought Woodforde a lump of black ironstone containing specks of gold. This was a major discovery because previously gold had only been found in quartz. It prompted prospectors to start looking in the hills to the south of the telegraph station which were capped with ironstone. The results were remarkable. The gold in the ironstone was sufficiently rich to yield up to 1.2 kg per tonne prompting Australia's last great goldrush.

* Although the conditions were harsh, and the federal government warned of problems with supplies, food and water, men rushed to the goldfield and by 1934 there were over 600 men in the district and that year the town of Tennant Creek was officially gazetted.

* In 1949 the famous Peko Mines was established. It was the result of one of the town's most important gold finds which was made by Joe Kaczinski and Bill Bohning. The two miners named their claim after Kaczinski's dog, Peko.

* One-eyed Jack Noble who teamed up with his friend and financier William Weaber, who was totally blind, established the Nobles Nob Mine. When the mine's main shaft collapsed in 1967 they moved to an open-cut operation which produced assays of over 3.2 kg of gold per tonne. During its productive life the Nobles Nob mine produced over 32,500 kg of gold.

The Tennant Creek Visitor Information Centre is located at Battery Hill, tel: (08) 8962 3388. The website is http://www.barklytourism.com.au/contact-us.html.

The Barkly Tablelands website - http://www.barklytourism.com.au/tennant-creek.html - has a lot of useful information about the town and surrounding attractions. 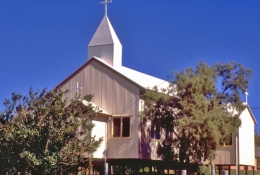 Church of Christ the King - the longest church in Australia? 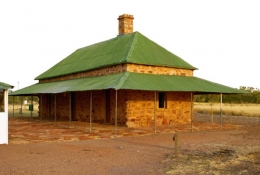 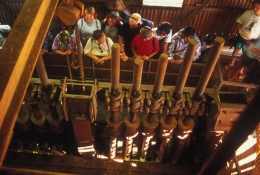 Inspecting the battery stamper on the Gold Stamp Battery Tour at the Battery Hill Mining Centre. 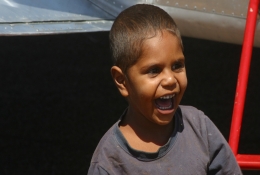 A local child waits beside our aeroplane at Tennant Creek airport.