Near ghost town where, in 1942, General Douglas MacArthur made his famous "I shall return" speech

There was a time when the population of Terowie was over 2,000. Today, with a population of around 200, it is a tiny township which is slowly becoming a ghost town. The reason: Terowie came into existence as part of the railway network which was built in South Australia in the late 19th century. With three different railway gauges meeting at the town it was vital to an economy driven by rail. Then, in the 1970s, the rail was reduced to a single line and there was no need for Terowie. The town collapsed and was designated an historic town because of its large number of well preserved 19th century buildings. Today there are old stores and shops reminding visitors that, back in the 1880s, it was a vibrant and important railway town. It is a fascinating relic of the time when rail was the vital form of travel.

It is accepted that "terowie" is an Aboriginal word (probably from the Ngadjuri language) "tirawi" meaning  "bitter water".

Of particular interest:
2. Original Post Office
Located in North Terrace and now privately owned, this was the town's major Post Office for a century (1882-1993). It was located at this point because the postmaster wanted to be close to the railway line.

3. The Railway Yard and Railway Station
I Came Out of Bataan and I Shall Return - General MacArthur Monument
On the railway station platform at Terowie, on the 20 March, 1942, one of the most famous speeches/statements of World War II was made.
It was here, for the first time, that General Douglas MacArthur declared “I Shall Return”.
He would go on to say it over and over again until, eventually, he did return to the Philippines to drive the Japanese out of that country and to help win the war in the Pacific.
The context was strange. MacArthur, the Supreme Commander of the Allied Forces in the South West Pacific, had escaped from Corregidor in the Philippines by PT boat, reached Mindanao, had flown to Batchelor Airfield south of Darwin, flew to Alice Springs and that was where he had caught a train.
He was travelling south to Adelaide, and then on to Melbourne, with his wife and support staff on a personal train (such are the luxuries of a Supreme Commander) which comprised a steam engine, bogie van, dining car, two sleeping cars plus brake van.
While changing trains in Terowie, MacArthur stood on the railway platform – I love the description from one of the newspapers at the time – “The tough tall guy, with a whisky bottle at his belt, a tame flying fortress, and a legendary habit of shooting his way through red tape” made his speech regarding the Battle of the Philippines in which he said: "I came out of Bataan and I shall return".
It was the first time he said it and it became a legendary observation about the war in the Pacific.
It was as memorable for people in Australia and the United States as any of Churchill’s speeches about Europe. A blunt “we shall never surrender”.
It is also worth remembering that this statement of resolve and determination was said at a time when the Japanese were making impressive headway in the movement to the south. They had forced MacArthur to flee from the Philippines and the plane he was flying in could not land in Darwin because the town was being bombed by the Japanese. “I shall return” was determination against powerful evidence of imminent defeat.
The ever-reliable Monument Australia website (there is a monument to the event on the Terowie platform) records: “Douglas MacArthur arrived at Terowie Railway Station and much to MacArthur’s surprise his "secret" arrival in Terowie was not so secret. A huge cheer went up from the locals who had gathered when he left the train.
“General MacArthur responded by striding towards an opening between a line of railway carriages and saluted the people of Terowie on the other side of the carriages and some passengers on a nearby train. MacArthur was dressed in a loose hanging jacket and slacks and wore no decorations or insignia except for a laurel wreathed peak on his cap and another emblem.
“On being asked if he would reach the United States he said:- "The President of the United States ordered me to break through the Japanese lines and proceed from Corregidor to Australia for the purpose, as I understand it, of organising an American offensive against Japan, the primary purpose of which is the relief of the Philippines. I came out of Bataan and I shall return".
The sleeping carriage NRC36 where MacArthur was resting when he got to Terowie is now in the Pichi Richi Railway Preservation Society collection at Quorn, just north of Terowie.

7. Dr. Hill's Eye Hospital Building
Located in Main Street and built around 1885 by a Dr Abramowski, by the 1890s this building had become the surgery of Dr Hill who experimented with rabbits to try and improve human eyesight.

8. Police Station
Located in Main Street near Frederick Street, the Police Station dates from the town's first boom period - it was built in 1882 - and still has the original cells at the rear. It is now a private residence.

9. St Joseph's Convent
Located on the corner of Mitchell Street and Frederick Street, and built in 1885, this convent was operated between 1911 and 1966 by Sister Mary McKillop's Sisters of St Joseph.

11. St Johns Anglican Church
Built in 1880 this church has been, at various times, Primitive Methodist and Salvation Army. It was purchased by the Anglicans in 1890 and church services are still held three or four times a year. It is located in Mitchell Street

17. Group of Shops
There are groups of shops, now disused, on the main street some of which have remained untouched since they were built in the 1880s. Of particular interest are those now used as the Terowie Tea Rooms.

23. Terowie Arid Lands Botanic Garden
Located on the main street of Terowie, this 0.4 ha totally indigenous Botanic Garden boasts 450 shrubs and trees from 250 different species. It has three different zones - the river zone, the rocky zone and the sandy zone including an 'Indigenous plants of eastern Tasmania' section. A number of the plants are endangered species. Check out https://botanicalgardens.com.au/details/152.

Dare's Hill Circuit Tour
Dare's Hill Circuit Tour, which starts on the eastern side of the Barrier Highway and is clearly marked (it is all gravel) takes visitors from Terowie to Hallett via Dare's Hill. It is 91.5 km long and passes Waupunyah Plain, Franklyn Homestead, Pandappa Homestead, Ketchowla Homestead, the Piltimitiappa Ruins, Goyders Line (that famous limit of agriculture) is crossed twice and there is Hallett and Whyte-Yarcowie. There's no petrol on the route and it is entirely on dirt roads. A true, edge of the desert, experience.

Ketchowla Historic Reserve
Located 32 km from Terowie, Ketchowla has fine examples of Aboriginal painting and carving. It is located in a number of dry channels and there are examples of red ochre animal tracks as well as geometric engravings.

* The first European to see the district was the explorer Edward John Eyre who passed through the district in July, 1839.

* By 1842 John and Alfred Hallett, early pastoralists, had settled in the area.

* During the 1840s a huge pastoral property named Gottliebs Well extended across the area now known as Terowie.

* John Mitchell purchased land in 1873 and built the town's first pub, the Terowie Hotel, in 1874. A store and a blacksmith soon followed.

* Terowie was surveyed and gazetted in 1877. At the time it was proclaimed as "Shebbear".

* A private town named Terowie was laid out by John Aver Mitchell in 1878. That year Mitchell donated land for the Terowie Institute.

* In 1880 the railway arrived making the town a natural regional centre. People and goods reached Terowie and then were taken to Broken Hill and Silverton by bullock team or coach.

* The population of the town was almost 700 by 1881. That year saw the publication of the North Eastern Times & Terowie News.

* In 1878 the English, Scottish & Australian bank opened offices in the town.

* The droughts of the 1880s, combined with the proliferation of rabbits, made smaller land holding uneconomic.

* The railway continued to sustain the town. It was the vital link between Adelaide and New South Wales and was the place where the broad gauge from Burra met the narrow gauge from Sydney.

* At its peak Terowie had over 3 km of railway tracks in its yards where men worked in workshops, engine sheds and the shipping yards. The town's population, at its peak, reached 2000.

* The Terowie District Council was formed in 1888.

* During World War II there was an army camp established at Terowie.

* On 20 March, 1942 General Douglas MacArthur made his famous speech: 'I came out of Bataan and I shall return.'

* In 1969 the old railway gauge from Hallett to Peterborough was removed and Terowie's importance declined. Very quickly it became a near ghost town.

* In 1985 Terowie was declared an historic town.

* In 1989 the line from Hallett to Peterborough was removed.

There is useful information about the town at http://www.visitburra.com/see-do/our-towns/terowie and Weekend Notes has some interesting photographs of the town. Check out https://www.weekendnotes.com/ghost-towns-australia-terowie. 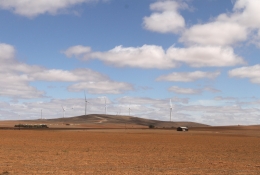 A wind farm on the way to Terowie 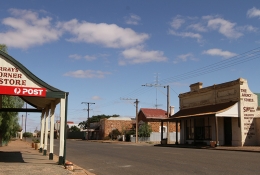 The main street of Terowie 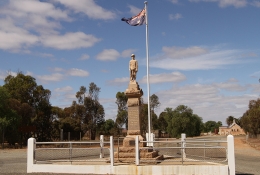 The war memorial with the railway station in the background 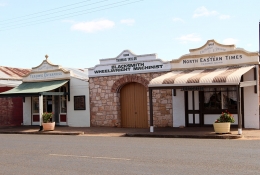 Historic buildings in the main street dating from the 1880s 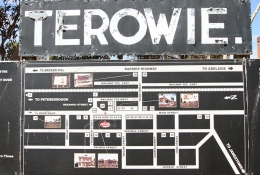 The guide to the town in the main street 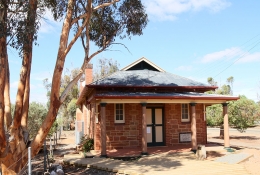 The Terowie Information Centre in the old CWA building (1938) 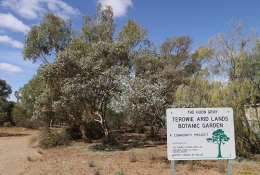 The Terowie Arid Gardens Project in the main street 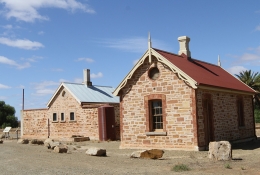 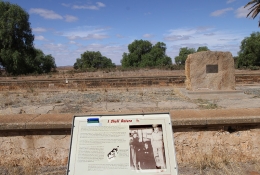 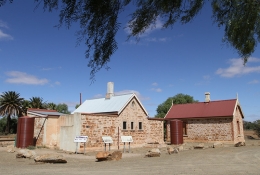 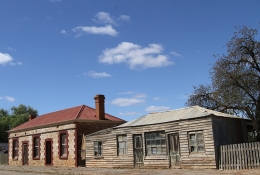 Historic homes in the main street