Popular holiday and retirement destination on the NSW Central Coast

It is common, when local councils on the New South Wales coast are resisting development (particularly dense and high rise development), to cite Terrigal as an example of the kind of development they don't want. In the 1970s Terrigal was a sleepy Central Coast town. Then a high rise hotel was built, the town's main roads became a circular one-way system, more apartment and holiday development was encouraged, and slowly Terrigal became a coastal town which looked more like a transplanted section of the Queensland Gold Coast than a sleepy hollow.

Terrigal is a popular residential, tourist and retirement centre with a bustling holiday ambience which is modified by the gracious Norfolk pines along The Esplanade, the pleasant beach front walkway which heads south to Broken Head, and the dominating natural feature known as 'The Skillion' which offers dramatic views up and down the coast. Visitors are attracted by the town's classy four and a half star hotel (the only one on the Central Coast which is beside the ocean), the fishing, swimming, surfing, boating and the coastal scenery. Terrigal Beach is one of those glorious beaches which stretches, unbroken, for four kilometres and is known as Terrigal at the southern end and Wamberal at the northern end.

Terrigal is located on the Central Coast 87 km north of Sydney via the Pacific Motorway and Gosford.

In 1826 John Gray became the first European to settle in the area. He named his property 'Tarrygal', after an Awabakal place name, meaning 'the place of little birds'.

The Skillion
One of the most interesting attractions at Terrigal is Broken Head and its distinctive feature, The Skillion. It was called Kurawyba by the Awabakal Aborigines and is a narrow headland which rises dramatically, but smoothly, from the surrounding coastline. The grassy walk to the top is easy and the lookout offers a panoramic view which encompasses the ocean to the east, views of First Point beyond Avoca Beach to the south and views north to Yumbool Point in Wyrrabalong National Park.

There is a detailed geological explanation of The Skillion at http://www.geomaps.com.au/scripts/theskillion.php. Part of the explanation for this unusual coastal formation is that "The sedimentary rocks in this location formed in an alluvial environment, possibly in a delta or river flood plain. Examination of the rock faces will show bedding where silt has been deposited over eons. Interpretations of the sediment in the rock indicate that, originally, water flowed to the south-east in the lower sections of the deposition and gradually swung around to the north-east in the upper zones."

Terrigal Beach
Terrigal Beach is one of those glorious beaches which stretches, unbroken, for four kilometres and is known as Terrigal at the southern end and Wamberal at the northern end. It stretches from Wamberal Point in the north to Spoon Bay in the south and has sections that are patrolled and a safe pool edged by rocks at the south.

Terrigal Lagoon and Rotary Park
To the north of the town centre is Terrigal Lagoon with both the Terrigal Lagoon Reserve and Terrigal Rotary Park. It is a popular family destination. Large trees line the lake's foreshore and, for those wanting some exercise after a picnic, it is possible to hire a paddle boat or canoe, tel: 0417 210 398.

Wamberal Lagoon Nature Reserve
Created in 1981 and covering 139 ha, Wamberal Lagoon Nature Reserve is considered to be one of the best coastal lagoon systems in New South Wales. It is listed on the Register of the National Estate because it contains 40 ha of coastal wetlands and is a sanctuary for protected birds and animals. It can be accessed at the northern end by heading east at the Crystal Street roundabout and driving towards Spoon Bay Road. At the southern end there is a car park at the end of Remembrance Drive which has an information sign about the reserve. It is also an access point to Wamberal Beach.

Forresters Beach
Forresters Beach, which was named after Robert Forrester who settled in the area in 1861, lies beyond Wamberal Lagoon and edges the southern section of Wyrrabalong National Park. It is another quiet beach with attractive, scenic views. There is an elevated viewing platform opposite Crystal Street and a number of access tracks across the main dune to the beach which stretches from the rocky headland at Cromarty Hill in the north to the rock platform at the northern end of Wamberal Lagoon Nature Reserve in the south.

Wyrrabalong National Park
Wyrrabalong National Park covers 597 ha and is divided into two distinct, physically separate sections and Pelican Island. The northern section of the park covers 480 ha and stretches from the shore of Tuggerah Lake across to Tuggerah Beach and Pelican Point and covers the dune system which separates the lake from the beach.  The smaller southern section runs from Bateau Bay to Forresters Beach just north of Terrigal and is about 120 ha. It is claimed that Wyrrabalong meant 'headland looking over the sea' (clearly a reference to the southern section of the park) in the language of Darkinjung people who once occupied the coastline between Bateau Bay and Forresters Beach.

The southern section of the park, which lies to the north of Wamberal, is characterised by high coastal cliffs of sandstone and shale with rock platforms that are popular with anglers and people wanting to explore the pools at low tide. It has woodlands of blackbutt, spotted gum and bloodwood along the plateau with shrubs and heath (mostly coastal banksia and she-oak) on the western slopes. The mangroves at the southern end of Bateau Bay are popular with shore birds and marine life. Fauna in the woodlands includes goannas, bandicoots, fantails and the tawny frogmouth.

The southern section can be accessed off Bateau Bay Road which runs alongside a strip of parkland that overlooks Bateau Bay.

There are two excellent lookouts.

* Wyrrabalong Lookout is located on Cromarty Hill. Positioned on the cliff's edge, 132 m above sea-level, it has panoramic views south to The Skillion at Terrigal.

The Coast Walking Track is a 3.5 km one-way, medium difficulty walking track which starts from Bateau Bay Beach and goes south along the coast to Wyrrabalong Lookout. There is a shorter 1.6 km track between the two lookouts which leads through attractive woodland along the cliffs. Expect to see whales between May and August and displays of wildflowers in early spring.

There is a useful, downloadable brochure on the park. Check out http://www.environment.nsw.gov.au/resources/parks/brochures/120229WyrrabalongNPBrochure.pdf

Dive the Wreck of the HMS Adelaide
The official website explains: "The Ex-HMAS Adelaide is a former Australian naval warship that was purpose-prepared and sunk to create an artificial dive reef. Located approximately 1.4 km off The Skillion near Terrigal on the Central Coast of New South Wales, in 32 metres of water this site has been prepared and optimally located to make it attractive to divers of all levels of experience.

"The ship measures 138.1 metres from bow to stern, with a beam of 14.3 metres and original displacement of 4100 tonnes. Diver access holes are strategically placed throughout the vessel to allow easy access to explore the key features of the wreck. Divers will recognise the captain’s chair, console and chart table from the bridge, the helicopter hangars, the operations room complete with the shells of weapons and sensor consoles, the crew’s cafeteria and a limited number of bunks and amenities.

"Scuttled before an estimated 18,000-strong crowd on April 13, 2011 the ex-HMAS Adelaide is already home to an establishing healthy marine community, where along with encrusting “first settlers”, the shipwreck is now home to a growing marine community which includes the giant eastern cuttlefish, eastern blue groper, kingfish, blennies, yellowtail, octopus, banner fish and bat fish to name a few."

* Prior to European settlement the area was occupied by Awabakal, Darkinjung and Kuring-gai Aborigines.

* When Captain James Cook passed along the coast (he did not land) in 1770 he named Cape Three Points near Avoca and noted the presence of Aboriginal campfires on the shore.

* 1826 saw the arrival of John Gray, the first European settler in the district, who called his property Tarrygal, believed to be an Aboriginal word meaning 'place of little birds'.

* By the 1870s the timber industry was well established and there was a sawmill in the district owned by Thomas Davis which, at its peak, employed 120 men (70 of them were involved in transporting the logs) and a tramway ran the timber to a coastal jetty for shipment to Sydney.

* The completion of the Sydney-Newcastle railway line in 1889 meant that tourism in the area boomed as people from Sydney took the train and then made overland journeys to the coast.

* In 1925 the Terrigal Surf Lifesaving Club was established.

* By the 1960s Terrigal, and the whole of the Central Coast, had become a popular holiday destination. The freeway to Sydney was completed in the 1960s.

The website - http://www.terrigal.org/ - has useful information about eating and accommodation in the area. 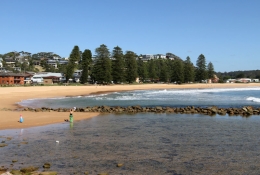 The pool at the southern end of Terrigal beach. 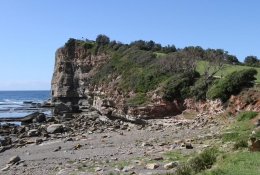 The Skillion lies at the southern end of Terrigal. 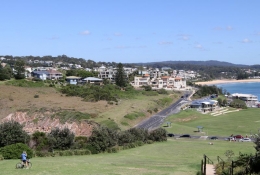 The view from the top of the Skillion across to Terrigal township. 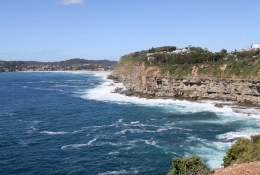 The view south towards Avoca Beach from the top of the Skillion. 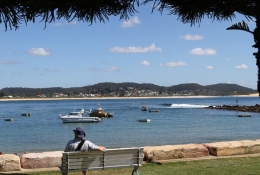