Texas is located on the banks above Dumaresq River. It is a very small community serving the surrounding grazing area. Like so many of Queensland's rural settlements it spreads and has lots of vacant land within the boundaries of the town. The area was devoted to growing tobacco and raising sheep and cattle. Historically it has suffered from natural disasters including floods in 1890, 1921 and 2011 as well as a serious rabbit plague in the 1920s.

Texas is located 304 km south-west of Brisbane via Ipswich and Warwick, 100 km west of Stanthorpe and 114 km south-east of Goondiwindi.

When Texas was first settled in 1843 it took its name from the Texas pastoral station which was the largest landholding in the area. The Texas station had been the subject of a land dispute and it is thought it was named "Texas" because of the famous land dispute between Mexico and the USA.

Our Heritage Our History
Along the High Street are a number of informative plaques recording the history of buildings and providing interesting insights into the nature of the town. For example: the sign for 44-46 High Street records that "44 The Rex Theatre built by J Reeves and operated by various proprietors. In the late 50s Australia's first colour film 'Jedda' had a first Queensland screening at Texas, producers Charles and Elsa Chauvel attended. Later became a TAB and a fruit shop."

Spirit of Texas Sculpture
Located in the main street opposite the Texas Memorial Hall, the Spirit of Texas is a public art sculpture which was commissioned in response to the devastating floods of 2011. The design was influenced by the abundance of water birds that appeared following the floods and it is also an echo of the image of a phoenix - a symbol of the Texas community's ability to overcome adversity.

Texas Heritage Centre and Tobacco Museum
Located at 40 Flemming Street, the Texas Heritage Centre and Tobacco Museum is housed in the old Police Barracks which was built in 1890 after the floods. It is open on Saturdays from 9.30 am - 1.30 pm and by appointment. Tel: (07) 4653 1392. The area surrounding the main museum includes a shop from Smithfield, a mini Shearing Shed, Harness Shed, Blacksmith’s Shop, Post Office Store, Farm Shed, and a special Tobacco Museum. There is also the old Gaol (with special steel reinforcement between the timbers to ensure that even the most committed inmate could not escape) and stocks and some interesting old farming equipment. By the 1860s Chinese were growing tobacco in the area and one of the pamphlets at the Museum recalls: "The Chinese tobacco grower's farm usually consisted of five acres on which he would put down three wells which were fifteen feet deep ... The growers were terrific workers. They carried 2 six gallon watering cans full of water on a pole across their shoulders. They walked between the rows and sprinkled the plants on each side simultaneously as they walked, or rather jogged, between the rows." For more detailed information check out https://www.grc.qld.gov.au/texas-museum. There is a brochure which can be downloaded at https://www.grc.qld.gov.au/documents/42283202/42328587/Texas%20Heritage%20Centre%20%26%20Tobacco%20Museum%20Brochure.pdf.

Texas Cultural Centre and Regional Art Gallery
Texas is located on the Dumaresq River which is prone to flooding. In fact the town has been decimated a number of times and has been forced to move. In 1890 the newly opened Police Barracks ended up stuck between two trees as a result of the floods. The Cultural Centre has an interesting exhibition of photos of the 2011 floods.

Texas Rabbit Works
Located in Mingoola Road, and opened in 2017, the "Historical Rabbit Processing Works" was built in 1928 to take advantage of the rabbit plague which was decimated the area. The Goondiwindi Regional Council website explains: "The business ceased operation in 1992 but during the period between 1930 and 1960 this was a thriving industry when rabbits were in plague proportions throughout the district. Employing 33 people and processing 6,000 rabbits a day the rabbit works was a major business in the district. Like many communities in the southern parts of Australia, the Texas community survived the great depression by trapping and selling rabbits for export to America and England." It is open Tuesdays and Thursdays 10.00 am - 2.00 pm and Saturday 9.00 am - 3.00 pm. Tel: 0448 762 016 or check https://www.grc.qld.gov.au/rabbit-works.

Beacon Lookout
Located only five minutes drive to the east of the town on the Stanthorpe-Texas Road, the Beacon Lookout offers impressive, panoramic views over the Dumaresq River valley.

Glenlyon Dam
Located 49 km south-east of Texas, Glenlyon Dam, and its Tourist Park, are known for the camping, fishing, sailboarding and canoeing. It is widely acclaimed as an outstanding fishing destination. For more details check out http://glenlyondamtouristpark.com.au.

Sundown National Park
Located only 11 km further on from Glenlyon Dam, or 52 km east of Texas, is Sundown National Park, 16,000 hectares of 'primitive' countryside which is administered by the Queensland National Parks and Wildlife Service. It is known as an excellent destination for bushwalking and birdwatching. The Queensland Department of Environment and Science website (https://findapark.npsr.qld.gov.au/parks/sundown) describes the park in glowing terms: "With its dramatic landscape of sheer-sided gorges, tree-lined ridges and peaks rising over 1000m above the Severn River, discover for yourself the park’s wild isolation. Camp on a river flat and throw in a line to see if you can catch a yellow-belly or eel-tailed catfish. Wander to Permanent Waterhole for a refreshing dip, or climb the Western circuit and gaze out across the horizon. Witness rust-red granite cliffs at Red Rock Gorge lookout track, with peregrine falcons flying overhead. Walk among box, ironbark and cypress trees in beautiful eucalypt woodland, and picturesque river red gums and river oaks growing along the water. Challenge yourself with a half-day adventure, following the creek from Burrows Waterhole to Rats Castle or into Ooline Creek. Keep watch for brush-tailed rock-wallabies hiding among rocks near Nundubbermere Falls. Investigate centuries-old pastoral relics and abandoned mines where tin, copper and arsenic were unearthed from the 1870s." There are five walks listed by Parks and Forests (see https://findapark.npsr.qld.gov.au/parks/sundown/journeys):
Burrows Waterhole to Rats Castle Track
A 6 km return (3 hour round trip) walk beside the Severn River, through stands of ironbark and white cypress pine which starts at Burrows Waterhole Camping Area and ends with panoramic views at Rats Castle. It is possible to swim and fish in the river.
Ooline Creek Track
A 4 km return (3-4 hour) walk along Ooline Creek and Gorge where figs, pittosporums and ooline, a medium to large tree with bright green leaves and rough, tile-patterned bark, all grow.
Permanent Waterhole Track
A 2 km return walk (1 hour) to the Permanent Waterhole on Ooline Creek. It is possible to swim in the waterhole where small fish, crayfish and platypus live.
Red Rock Gorge Lookout Track
A 550 m return walk which starts at the Red Rock Camping Area and reaches the Gorge lookout which offers panoramic views of the gorge's granite, and lichen encrusted, cliffs. The Parks website notes: "Delight in glimpses of peregrine falcons and other birds of prey soaring along the cliffs of the gorge. Listen out for the refreshing sound of water tumbling over Red Rock falls, and in winter, the fluid calls of lyrebirds sheltering in the dry rainforest far below. Enjoy the picturesque show of granite-belt wildflowers during spring, including the distinctive blooms of the sago flower."
Western Circuit
A 4.5 km circuit starting at the Broadwater Camping Area which is particularly notable for the birdlife including spiny-cheeked, yellow-faced and fuscous honeyeaters, golden whistlers, turquoise parrots and diamond firetails.

* Prior to the arrival of Europeans the area was home to the Bigambul First Nation peoples.

* In 1840 J. McDougall and his brother took up land in the area and named it Cullybullan.

* McDougall renamed his property Texas in 1843.

* In 1875 the large land holdings were resumed for free selection. That same year the town was surveyed.

* By 1886 Texas was described as "the town only exists on paper" and describes it as a hotel, a store, a few cottages and the factory.

* In 1890, the day before a devastating flood, the Police Barracks were opened.

* The famous flood of 28 March 1890 wiped out the tobacco factory and the town. The town moved 2 km north to higher ground.

* The cheese factory became a butter factory in 1912.

* A town hospital was opened in 1913. That year saw the Silver Spur mine close down.

* A serious flood raged through the town in 1921. Once again parts of the town were forced to move.

* Soldier settlers moved into the area in the 1920s.

* In 1928, as a result of a rabbit infestation of the district, the Texas Rabbit Works were opened.

* A branch railway line from Inglewood opened in 1930.

* Commercial hotel destroyed by fire in 1969.

* By 1993 less than 1% of the country's tobacco was being grown around the town.

* The railway to the town was closed in 1994. That year saw the last of the tobacco grown in the area.

* In February, 2011 the town was again hit by serious floods.

There is a useful local website. Check out https://www.grc.qld.gov.au/texas. 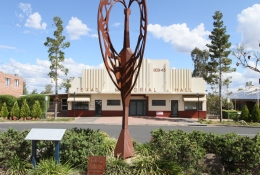 Spirit of Texas sculpture and the Texas Memorial Hall 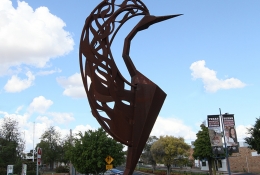 Spirit of Texas sculpture in the shape of a water bird 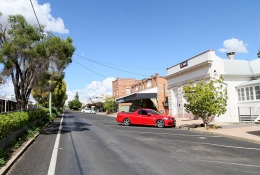 The Main Street of Texas 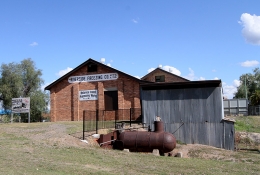 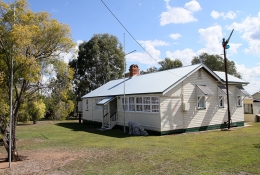 Buildings at the Texas Heritage Centre and Tobacco Museum