The Entrance takes its name from the narrow channel which connects Tuggerah Lake to the ocean. It is a popular holiday resort and retirement centre located between the large Central Coast lake system and the ocean. Its main tourist attraction is the feeding of the pelicans every afternoon at 3.30. It is an amusing spectacle which is part of the pleasant holiday ambience which pervades the town twelve months of the year. The region's attractions include surfing beaches, the quiet and shallow waters of Tuggerah Lake, foreshore parklands, a unique Heritage Walk, an open-air mall and some excellent National Parks. Tuggerah Lake is the largest of the Central Coast's interconnected 8,000 ha lake system. It is about 12 km long and 8 km across. The water, on average, is less than 2 m deep, shark-free and suitable for water skiing, canoeing, sailing, rowing and sailboarding. It is also appealing to anglers with blackfish, whiting, mullet, snapper, bream, flounder, tailor, flathead, jewfish and tar whine in abundance. Not surprisingly the channel, with its constantly changing tidal rushes, is a popular fishing location.

The Entrance is located 101 km north of Sydney via the Pacific Motorway, Enterprise Drive and Wyong Road.

The Entrance is one of those amusing, bleeding-obvious Australian town names. It is a town at "the entrance" to Tuggerah Lake and takes its name from the narrow channel between the ocean and the lake.

Feeding the Pelicans
One of the highlights of The Entrance occurs every afternoon at 3.30pm in Memorial Park just south-east of the bridge across the channel. Literally hundreds of pelicans gather for an afternoon snack. If you have never seen pelicans in vast numbers this is a real treat. Yes, of course, it is a tourist attraction but it is unique, amusing and genuinely memorable.

The Entrance Heritage Walk
Many towns have Heritage Walks. Very few have structured their walk as creatively as The Entrance where there are a series of signs and photographs set at short distances along the walkway from Memorial Park to the Surf Lifesaving Club. These are not the usual photos of historic buildings but rather a unique record of the quirky and the unusual aspects of the fabric of life at The Entrance. There's a 1904 photo of women in long dresses standing beside the channel; a photo taken in the mid-1950s of a bus which crashed through the retaining wall and landed on the edge of the lake; a photo taken in 1910 before there was a bridge across the channel; a photo of the 1949 flood with the sanitary truck up to its axles in floodwaters; and photos taken in 1923 of Duffy's Emporium, the Wintergarden Theatre and people camping in tents on The Entrance Headland. It is a delightful walk and a real insight into the evolution of The Entrance as a tourist and holiday destination.

Picnic Point Reserve
On the lake side of the central business district is Picnic Point Reserve. This is the town's "Tuggerah Lake Experience". There are walks, a large and pleasant park and a boat ramp. The view across the lake is impressive. The stacks of Munmorah Power Station and Vales Point Power Station can be seen in the distance. Pelican Island, part of Wyrrabalong National Park and a breeding site for migratory wading birds, lies just offshore.

Vera's Water Garden
In summertime it is hard to imagine a more enticing activity for children than Vera's Water Garden which is located in Memorial Park just near the Penguin Feeding area. It is a brilliant children's play area designed so that splashing and getting wet are an essential part of the experience. Bring a towel.

Wyrrabalong National Park
Wyrrabalong National Park covers 597 ha and is divided into two physically separate sections. The northern section of the park covers 480 ha, stretches from the shore of Tuggerah Lake across to Tuggerah Beach and Pelican Point and covers the dune system which separates the lake from the beach.  The smaller southern section runs down the coast from Bateau Bay to Forresters Beach and is about 120 ha. The park also includes Pelican Island and Terilbah Island in Tuggerah Lake, which are breeding sites for migratory wading birds. It is claimed that Wyrrabalong meant 'headland looking over the sea' (clearly a reference to the southern section of the park) in the language of Darkinjung people who once occupied the coastline between Bateau Bay and Forresters Beach.

The Northern Section
Between The Entrance and Norah Head is the northern section of Wyrrabalong National Park. It stretches from the shore of Tuggerah Lake across to Tuggerah Beach and Pelican Point and covers the dune system which separates the lake from the beach. Although the surrounding area is quite urbanised this narrow strip of coastal land contains a considerable diversity of fauna and flora, including lace monitors, flying foxes, bandicoots, squirrel gliders, diamond pythons, possums, antechinus and a rich diversity of birds.

The ocean side is mostly coastal dunes with beach access via Pelican Beach Rd (at the northern end) and the Tuggerah Beach Walking Track (700 m) which leads to a popular surfing and fishing area.

On the western side of the Central Coast Highway there is the 2.3 km, easy, Red Gum Trail, a pleasant walk through angophoras, remnants of littoral rainforest, and some open scrubland and wetlands. There is also the longer Lillipilli Loop Trail (4.6 km, easy) which is a circuit through rainforest, corkwoods, cabbage tree plains and beside the Tuggerah Lake wetlands. The Wetland Trail runs off the Red Gum Trail (it is only 900 metres of easy walking) and crosses swamp mahogany and paperbark-fringed wetlands. These tracks can be accessed from two car parks on the western side of the Central Coast Highway. It is possible to download a brochure, complete with a detailed map, at http://www.environment.nsw.gov.au/resources/parks/brochures/120229WyrrabalongNPBrochure.pdf

The Southern Section
The southern section of the park is characterised by high coastal cliffs of sandstone and shale with rock platforms that are popular with anglers and people wanting to explore the pools at low tide. The southern park is characterised by woodlands of blackbutt, spotted gum and bloodwood along the plateau, with shrubs and heath (mostly coastal banksia and she-oak) on the western slopes. The mangroves at the southern end of Bateau Bay are popular with shore birds and marine life. Fauna in the woodlands includes goannas, bandicoots, fantails and the tawny frogmouth. The southern section can be accessed off Bateau Bay Road which runs alongside a strip of parkland that overlooks Bateau Bay.

There are two excellent lookouts.  Crackneck Point Lookout (274 m high) which looks north across Bateau Bay towards The Entrance and offers fine panoramic views up the coast.

Wyrrabalong Lookout is located further south on Cromarty Hill. Positioned on the cliff's edge, 132 m above sea-level, it has panoramic views south to The Skillion at Terrigal.

The Coast Walking Track is a 3.5 km one-way, medium difficulty, walking track which starts at Bateau Bay Beach and goes south along the coast to Wyrrabalong Lookout. There is a shorter 1.6 km track between the two lookouts which passes through attractive woodland along the cliffs. Expect to see whales between May and August and displays of wildflowers in early spring.

Wyrrabalong National Park also includes Pelican Island and Terilbah Island in Tuggerah Lake, which are breeding sites for migratory wading birds. There is a useful, downloadable brochure on the park. Check out http://www.environment.nsw.gov.au/resources/parks/brochures/120229WyrrabalongNPBrochure.pdf

* Prior to European settlement the area around The Entrance was inhabited by members of the Awabakal and Darkinjung Aboriginal language groups.

* The first Europeans into the area were shipwrecked fishermen in 1796. They were befriended by the local Aborigines who fed them and guided them back to Sydney Cove. Upon their return they recounted seeing a white woman living with the Aborigines. This led to a search party led by David Collins (a future Governor of Tasmania) being sent to the area. Collins was the first European to see Tuggerah Lake.

* In 1828 Henry Holden became the first European settler in the area when he took up 260 ha which he named Toowoon. Thomas Battley acquired the land in 1836 and it changed hands again and was acquired by the Taylor family in 1850.

* By the late 1820s Chinese fishermen were living at Toowoon Bay where they established a lucrative business curing and smoking fish which they sold to markets on the goldfields and as far away as China.

* In 1875 Billy Fawkner, known as the last Aborigine living on Tuggerah Lake, died. He was known as 'the last of the Brisbane Water blackfellows'.

* The railway between Sydney and Newcastle was completed in 1889. This resulted in increased tourism. Sydneysiders alighted at Wyong and travelled by launch up the coast where they holidayed, fished, swam and went walking.

*  By the early 1890s a holiday camp had been established at Toowoon Bay and the first guest house in the area opened at North Entrance in 1895.

* The settlement around the channel became officially known as The Entrance when the post office opened in 1911. The first school opened in 1915.

* The first bridge across the channel was erected in 1934.

* By the 1960s The Entrance, and the whole of the Central Coast, had become a popular holiday destination. The freeway to Sydney was completed in the 1960s.

* In 1968 the modern bridge across the channel was opened.

The town has its own website - http://www.theentrance.org - with details about accommodation and things to do. 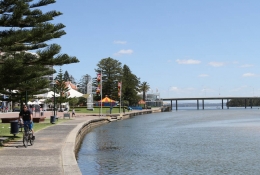 The foreshore and bridge at The Entrance 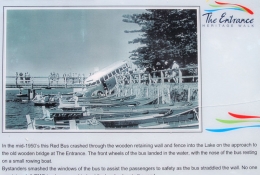 One of the many excellent signs on the Heritage Walk along the channel. 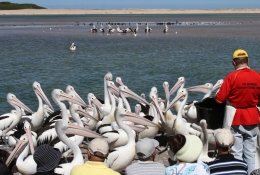 Feeding the pelicans at The Entrance 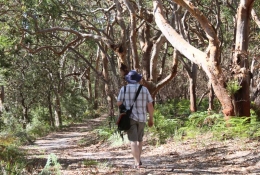 The Lillipilli Loop Trail in the northern section of the Wyrrabalong National Park lookout. 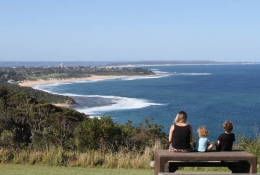 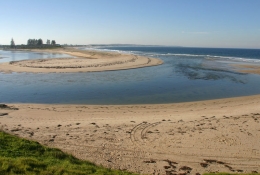 The true entrance to Tuggerah Lake 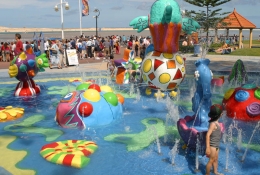