It is claimed that if you stand on the top of The Rock, which rises 364 m above the surrounding plains of the Riverina, you will - at least in theory - have an uninterrupted view all the way to the coast of Western Australia. This low outcrop is a reminder of the flatness of Australia and the ancient, eroded nature of the continent. The small and pleasant township, located in a wool and wheat district, is named after the dominant local geological feature, a craggy outcrop which can be seen from miles around. Today it has become a quiet, commuter town for Wagga which lies to the north. Visitors can walk to the top of the rock and explore the shorter Yerong Walking Trail.

The Rock is located 225 m above sea-level and 489 km south-west of Sydney via the Hume, Sturt and Olympic Highways.

Yes. It is the bleeding obvious. The Rock is named after, well, The Rock. Except that there is an interesting variation. It was originally known as Hanging Rock because there was once a spectacular "hanging" protrusion on the eastern side of the hill. When the protrusion collapsed in 1874 the ever-pragmatic locals renamed the town "The Rock". The local Wiradjuri had call The Rock - Kengal.

The Rock Town Hall & Museum
Located in the old Town Hall at 140 Urana Street, this is a relatively new venture which means that each visit will see new exhibits. It is open on the first Saturday of the month and is currently building up its collection of memorabilia about the town and the district. For "up to the minute" information check out https://www.facebook.com/TheRockHallMuseum.

Hanging Rock Hill and the Yerong Nature Trail
It is possible to climb to the top of "The Rock" along the 6 km (return) track known as the Yerrong Nature Trail. It takes around 3 hours for the return walk. The track passes through the 340 ha nature reserve which covers most of the northern end of The Rock. It is gentle at first but becomes more difficult as it zig-zags to the saddleback. There is a useful brochure which explains: "The lower slopes are dominated by a mixture of Grey Box, Blakley's Red Gum and White Box with occasional White Cypress Pine. As the slope becomes steeper and the soils shallower, the Red Gum and Grey Box become small and spindly before disappearing altogether and patches of Black Cypress and Red Stringybark become common. The trees on the higher slopes are mainly White Box and Currawang. At the base of the steep slopes there is a heath understorey which includes the Seven Dwarfs Grevillea, Native Cranberry, Urn Heath, Grass Trees and Kangaroo Thorn. The bare rock of the ridge is covered in lichens and moss. The common trees are Currawang, Dwyer's Mallee Gum and Drooping Sheoak. At the base of the cliffs, in shady moist sites, clumps of Woolly Ragwort occur, a threatened species restricted to hills in the local area. On a clear day it is possible to see Mt Kosciuszko on the horizon to the south-east. To the west is Galore Hill and beyond that the rolling plains of western New South Wales. The craggy rock faces have proved to be excellent nesting sites for wedge-tailed eagles and peregrine falcons." There are over 100 species in the reserve including Brown Treecreepers, Turquoise Parrots, Glossy Black Cockatoos, White-brown browed Babblers, Thronbills, Honeyeaters and Eastern Yellow and Red-Capped Robins. As well there are grey kangaroos, swamp wallabies, echidnae, possums and marsupial mice. It is believed that initiation ceremonies were held at The Rock in the past as the creek just to the south is known as Yerrong, a Wiradjuri word meaning "place of initiation". The Rock became a nature reserve in 1962 having been crown land for 100 years. The Wiradjuri people called 'The Rock' - 'kengal'. It is located 4.2 km from the Post Office on the road to Lockhart. National Parks and Wildlife Service have information about the Nature Reserve at http://www.nationalparks.nsw.gov.au/visit-a-park/parks/The-Rock-Nature-Reserve-Kengal-Aboriginal-Place.

* Prior to the arrival of Europeans the district was occupied by the Wiradjuri Aboriginal people who had lived in the area for at least 20,000 years.

* One of the first settlers was James Wall who, by 1847, held the licence for property in the immediate district.

* Known as Hanging Rock the rock ceased to 'hang' when a major rock fall occurred in 1874.

* The railway reached the settlement in 1880 and railway workers established a campsite and associated buildings.

* In 1882 the township was gazetted (as Hanging Rock) and a school and church were built.

* The Rock Stores, the first substantial brick building, was completed in 1895. It now houses Heckenberg Antiques.

* A branch line to Lockhart was opened in 1901. The town became a junction from the main Sydney-Melbourne line.

* In the 1920s an avenue of Silky Oaks (now replaced by kurrajong trees) was established in the main street. It honoured local soldiers who had fought in World War I.

* The Olympic Way bypassed The Rock in 1960 adversely affecting the town's commercial sector.

* With the growth of Wagga, only 31 km to the north, the town has become a commuter destination.

There is no local website. However the National Parks and Wildlife Service have information about the Nature Reserve at http://www.nationalparks.nsw.gov.au/visit-a-park/parks/The-Rock-Nature-Reserve-Kengal-Aboriginal-Place. 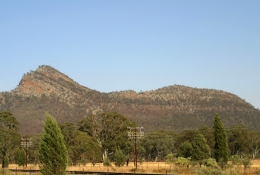 Rising 364 metres above the Riverina Plain, The Rock is the most prominent feature in the district. 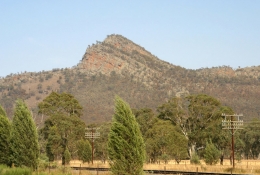 The Rock - it gives its name to the town. 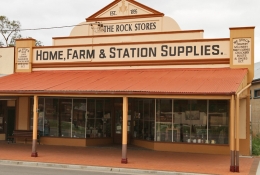 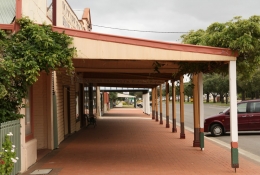 Most of the shops in Urana Street were built in the 1920s and have maintained their veranda-ed charm. 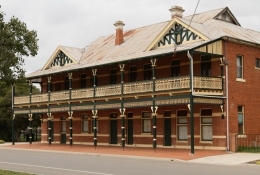 The old hotel, now a private residence, in Urana Street. 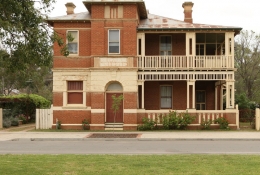 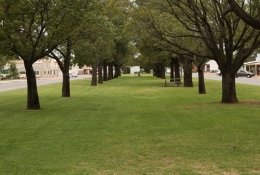 The Honour Avenue in the main street - commemoration for the soldiers who went off to fight in World War I. 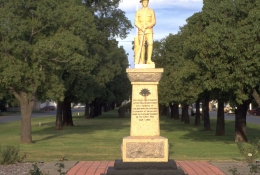 The War Memorial at the end of Honour Avenue in Urana Street.