Theodore is like no other town in Australia. Although it lies on the eastern side of the Great Dividing Range it is almost tropical with it extensive stands of palm trees in the main street and its 1950s ambience with old, charming timber houses and broad streets. It is a town which started as the small inland settlement of Castle Creek and was renamed after one of Australia's most controversial politicians, E. G. 'Red Ted' Theodore (Premier of Queensland 1919-25 and Treasurer and Deputy Prime Minister 1929-30). It is now an important town at the southern end of the coal-rich Bowen Basin.

Theodore is located 140 m above sea level and 561 km from Brisbane via the Warrego and Leichhardt Highways.

Originally the town was known as Castle Creek. It grew up as a small settlement on the Dawson River servicing the needs of those who passed through and the surrounding properties. In the 1920s, when the government began to develop it as a model town, it was named after the then Premier of Queensland,  E. G. 'Red Ted' Theodore.

Roman Catholic Church
Located on The Boulevarde, the Sacred Heart Catholic Church and residence are excellent examples of Queensland vernacular wooden architecture with a simplicity and practicality (admire the veranda at the front) suitable for the climate.

Hotel Theodore - Australia's only Co-operative Hotel
When Theodore was being developed as a vast irrigation project in the 1920s a boarding house was established to house the workers. The boarding house was later used to house the potential purchasers of the surrounding land. The Queensland Irrigation Commission owned the boarding house and eventually they acquired a liquor licence. In 1949 the Queensland Lands Commissioner and Irrigation Commissioner suggested that the town should have a Corporate Community Hotel. The result was a hotel which came into existence as a result of a special act of parliament - the Theodore Co-operative Hotel Association Enabling Act - and which was owned by members of the local community who bought shares at the price of two shillings and six pence. Over the years the old hotel has grown and it was eventually purchased from the Irrigation Commission for £10,000. The profits from the hotel are still used to fund community activities and projects and, over the years, money has gone to the school, hospital and local clubs. As the hotel's website explains (http://www.hoteltheodore.com.au/main/page_about_us.html.) "Many people past and present have numerous tales to tell of their visit to the local pub, their first beer, their first love, their first fight, their stag party, their wedding, their anniversaries, their birthday party, their going-away party ... some experiencing all eight."

Historic Buildings
Theodore is one of those towns where the visitor should park their car, get out and just wander. There are many interesting historic buildings. The Sacred Heart Catholic Church, a number of classic Queenslanders, the fascinating Hotel Theodore, the gloriously wide and well-planned streets and such quaint eccentricities as the Castle Creek Theatre on the main street. The name recalls the settlement before it became Theodore.

Isla Gorge National Park
Located 38 km south of Theodore on the Leichhardt Highway, the Isla (pronounced "eye-la") Gorge National Park is a spectacular landscape of sandstone cliffs and gorges. The main gorge can be conveniently reached on a 1.4 km dirt road which runs off the main Theodore-Taroom road. Look carefully. It is easy to miss it. The road leads to a viewing point where the national park's cliffs and deep sandstone gorges can be viewed. A narrow path leads to a viewing point with a panoramic view across the gorge. The bushwalks around and through the gorge are meant for experienced walkers only. There are a number of useful boards near the car park. One of boards points out "loose, crumbly rock makes the descent into the gorge dangerous. Only well-equipped, experienced walkers should enter this part of the park. Another offers detailed information about how to access Flagstaff Hill (it lies to the north) and the remarkable historic road from Roma to Rockhampton which was built out of large rock slabs in the 1860s.

Cracow
Fifty kilometres to the south-east of Theodore is the strange ghost-like town of Cracow (pronounced "Crack-oh") . Named in 1851 for a pastoral run, gold was first discovered in 1875 by itinerant fossickers and in 1881 the Golden Plateau mine was established. At its peak the town boasted five cafes, barber shop, billiard saloon, two butchers, a picture theatre and a soft drink factory. The closure of the mine in 1976 has left many houses and all the shops except for the Hotel deserted. If you look carefully you can still see the fading names of the businesses on the walls of the deserted buildings. There's an old boarding house and two buildings marked as the  Bank of New South Wales. The Cracow Hotel is reputedly the home of the world's last remaining travelling Boxing Tent and has an eclectic collection of memorabilia on display. You can catch the Boxing Troupe in Cracow  in March every year. Cracow Gold Mine now operates the underground mine and have undertaken the restoration of three historic buildings located alongside the Community Centre. Take a walking tour of the deserted buildings along the main street up to the abandoned hospital. Contact the owner of the Cracow Hotel on 4993 1620 to organise a visit.

* Prior to European settlement the area around Theodore was inhabited by the Yeeman (now known as Iman) people whose numbers were decimated by massacres as settlers moved in. They managed to survive and now have Native Title in the area.

* The first Europeans into the area were the explorers Eldershaw, Archer and Leichhardt in the 1840s.

* Castle Creek grew up as a tiny settlement serving the needs of the large properties - Camboon and Walloon stations -  in the Dawson Valley. As well it provided a suitable resting place beside the Dawson River for bullock and horse teams moving to and from the port at Rockhampton.

* In 1923, under the premiership of E.G. Theodore, the government resumed the land from the larger properties in the district. The plan, typical of the socialist idealism of the time, was to develop a sophisticated irrigation system and sell small blocks of land which could be intensively developed. At the time a publication titled the 'Little Green Book' declared: 'Tens of thousands of acres of glorious land lie in idleness, awaiting the day when agriculture will awake them into fruitful activity. And, as the land is conquered, wealth and population will follow.' The plan was to build a model garden city and surround it with 5000 small farms all reliably irrigated by the waters of the Dawson Valley. The Little Green Book went on to describe the future town of Theodore as: 'planned on the most modern lines ... Traversing the township from north to south is a spacious garden boulevarde, intersected at intervals by avenues which have also been planted with palms and shade trees in such a manner as to led a restful appearance to the scene ... in the centre of the town is an oval around which has been erected the residences for the accommodation of members of the Commissioners local staff ... the oval is laid out in lawns, in the centre of which stands a picturesque water tower 50 feet high, from which the town water supply is reticulated. The floor of the tower is arranged as a bandstand.' Sadly, the bandstand has gone but the water tower is still in the roundabout at the end of the main street.

* The Theodore Irrigation Project was opened in 1924. The model town comprised a large settlers' and visitors' accommodation centre, a public hall with cinema, an Irrigation Commission office, shops, a sawmill and an electricity generation plant.

* In 1926 a railway line connected  Baralaba to Theodore. That same year saw the release of 264 irrigated lots of 10 to 24 acres and 109 dry-farm lots of 80-500 acres. Weirs were built on the Dawson River and tributaries for a gravitational channel system.

* From 1926 to 1958 the town was administered by the Queensland Irrigation Commission. After 1958 it became part of the Banana Shire.

* Today the town continues to prosper because of the nearby coal mining in the Bowen Basin and  because the rich black soils and the waters of the Dawson River are ideal for sorghum, wheat and cotton. There is also extensive sheep and cattle (the breeds in the local area include Brahman, a Brahman-Hereford cross called Braford, and Santa Gertrudis) breeding. 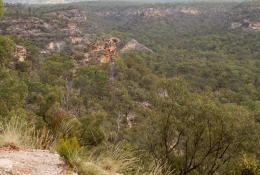 The view from the car park at Isla Gorge National Park south of Theodore. 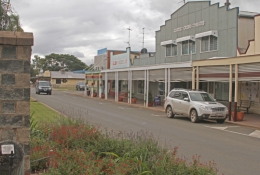 The old Castle Creek Theatre in the main street of Theodore. 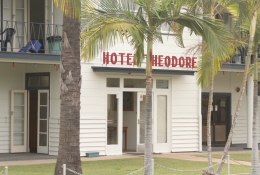 The Theodore Co-operative Hotel which is owned by the local community. 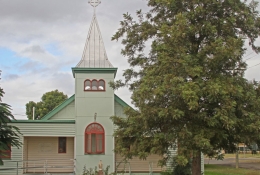 Sacred Heart Catholic Church in the main street of Theodore. 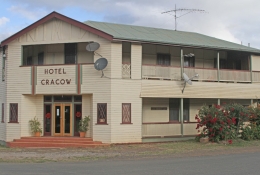 The Hotel Cracow at Cracow.