Thirlmere is a rather nondescript town which grew up as a direct result of the construction of the Great Southern Railway which moved slowly through the Southern Highlands in the 1860s. The main railway camp was at Thirlmere between 1863-1867. It moved on to Mittagong and Bowral in 1867 and to Goulburn from 1869-1875. Thirlmere may have had a future but the construction of the Hume Motorway ensured that it was bypassed and thus became a sleepy backwater beyond the suburban sprawl which now stretches beyond Camden and Campbelltown. Today it has a remarkable railway museum - Trainworks - and the Thirlmere Lakes National Park is a quiet bush retreat just beyond Greater Sydney.

Thirlmere is located 93 km south-west of Sydney via the Hume Motorway and Picton. It is 171 m above sea-level on the edge of the Southern Highlands.

Thirlmere takes its name from Lake Thirlmere in the English Lakes District. It was named because of the lake, now known as Thirlmere Lake, which was reached by explorers as early as 1798.

Trainworks
The main attraction in Thirlmere is Trainworks at 10 Barbour Road.  (See https://www.nswrailmuseum.com.au for more details) It claims to be the oldest and largest railway museum in the country. Decades ago the New South Wales Railways, wanting to get their historic trains and rolling stock out of Sydney, joined with the volunteer-based Railway Heritage Museum and established a museum at Thirlmere.

In the early years it was one of those places beloved of railway enthusiasts where men (very few women were drawn to the old rolling stock) covered in grease and with spanners in their back pockets wandered around in blue overalls tinkering with ageing steam trains while visitors mooched through hectares of old trains. It included 60 locomotives (steam, diesel and electric) and 100 carriages, including a No 18 engine built in 1864 and a huge 260-tonne Garratt No 6040 built in 1956.

Then the New South Wales Labor government decided to spend $30 million and turn the dumping yard into a state-of-the-art “train experience”. Trainworks was opened by the New South Wales Governor, Marie Bashir, on 4 April, 2010. It is a tour de force of museum creativity.

The highlights include a 15-minute audio-visual display created by the specialist tourism project company HPA Projects. It is built around a Cardiff 1012 steam train (built in 1916 it operated at Catherine Hill Bay for years and was “retired” in 1970) which is located on a “stage” in a theatre at one end of the main building. The history of the old locomotive is told by a mixture of back projection and a series of remarkable 3D holograms of the men (specifically the engine driver and a blacksmith) who worked on, and drove, the Cardiff 1012. They talk about their experiences. Although they are nothing more than holograms. their actions are carefully integrated with the audio soundtrack.

Among the other displays are the old Governor-General’s carriage with its elegant interior of polished English oak and Australian cedar; a prison van with a “hologram prisoner” sitting in a corner being transported from one place of incarceration to the next; a mail sorting carriage where bags of letters and parcels were sorted while the train travelled to its destination; a green and white rail bus (a bus designed to run on railway tracks) which delivered the pay to railway workers; a huge 260 ton (264 tonne) 6040 Garrat, one of the largest engines ever built; the steam train built which in 1905 was the first to cross the Sydney Harbour Bridge; and a huge railway Roundhouse where engines are turned 180 degrees.

Visitors can take train journeys from Thirlmere to Buxton on old trains and, given every new generation’s enduring love affair with Thomas the Tank Engine, there is always the possibility to meet the Fat Controller.

The yard is full of rolling stock that is worth inspecting and there is a large parking area, a café serving coffee and light meals, audio visual displays inside carriages and an air of cleanliness and tidiness. Trainworks is run by a mixture of paid staff and volunteers. I was particularly impressed with a guide named Arthur Tubby (ask for him – he is a mine of information about trains and comes from a long line of railway workers) who is passionate about the entire operation.

Trainworks is open seven days a week. It is open 10.00 am - 4.00 pm Monday to Friday and 9.00 am - 5.00 pm on weekends, tel: (02) 4681 8001. Every Sunday there are rides to Buxton along the disused single-track Picton-Mittagong Loop Line which was built in 1867 when the railway first came through the area. This was the railway line which opened up the whole of the Southern Highlands. The construction of a new double track after World War I meant that the Picton-Thirlmere-Buxton Loop was by-passed. It operated as a local line until 1976 when it was closed down.

Thirlmere Lakes National Park
Thirlmere Lakes National Park has five interconnected freshwater lakes which are ideal for swimming and canoeing. They can be accessed from Thirlmere by heading south past Trainworks and turning right into Slades Road (2 km south of Thirlmere) which heads to Middleton Memorial Drive. The shoreline has been developed for picnics and barbecues. There is a boat ramp. The eucalypt forests around the lakes are ideal for bush walking and the lakes are an ideal habitat for birds.  There is a pleasant 6 km loop walk around Thirlmere Lake. As the website explains (see http://www.nationalparks.nsw.gov.au/thirlmere-lakes-national-park/thirlmere-lakes-walking-track/walking) the walk is easy, takes two hours and is so rich in birdlife that "you’ll see many of the 140+ species of waders, waterfowl and woodland birds that visit the area. Among them are white-faced herons, musk ducks, pacific black ducks, pied cormorants, Australasian grebes, and white-bellied sea eagles."

Wirrimbirra Sanctuary
Located at Bargo 9 km from Thirlmere, and struggling financially because it relies entirely on volunteers and donations, is Wirrimbirra Sanctuary. It is remarkably unpretentious and is geared to operate as a "sanctuary" for wombats, swamp wallabies, Eastern Grey kangaroos, emus, King parrots and sulphur crested cockatoos. The website explains: "Wirrimbirra is a flora & fauna sanctuary run entirely by volunteers who are dedicated to the preservation and conservation of Australia's unique flora and fauna. Wirrimbirra's main focus is environmental and wildlife education. It has over 200 acres of preserved native bushland - the unique flora of the remaining part of the area known as the 'Bargo Brush' in colonial times, but known and frequented, much longer by the traditional aboriginal peoples including the Tharawal." It is open from Tuesday to Sunday from 9.00 am - 4.00 pm. Check http://www.wirrimbirra.com.au/ for entry fees and other information.

* Prior to European occupied by the Gundungura and Tharawal Aborigines had occupied the area for at least 20,000 years.

* By 1795 a small number of stockmen were living in the area and tending the cattle which had been grazing on the Cowpastures at Camden.

* By 1819 Governor Macquarie had authorised the construction of a road through to the Goulburn Plains.

* In 1822 Major Henry Antill established a 2000 acre property which he named 'Wilton' but subsequently renamed 'Jarvisfield' after Jane Jarvis, the wife of his friend, Governor Macquarie.

* In 1828 the first land grant in the area was 'Stargard', a property of 1000 acres (405 ha) at Stonequarry Creek near Picton. It was a gift to Christian Carl Ludwig Rumker, Governor Brisbane's astronomer, who had rediscovered Encke's Comet.

* The railway arrived in 1863 and a settlement developed around the station.

* Trainworks was opened by the New South Wales Governor, Marie Bashir, on 4 April, 2010

The two most useful websites are the Trainworks (https://www.nswrailmuseum.com.au) and the Thirlmere Lakes National Park (http://www.nationalparks.nsw.gov.au/thirlmere-lakes-national-park). Both have all the information on the area. 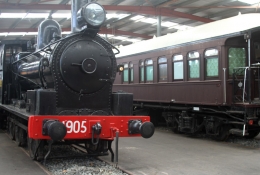 An historic steam engine and the Governor's carriage at Trainworks 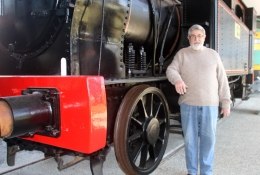 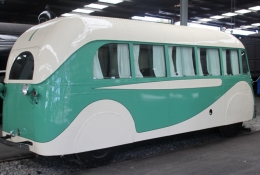 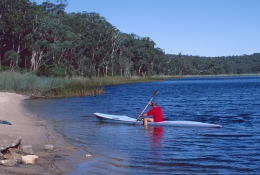 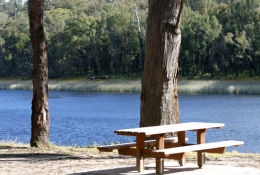 A picnic bench beside Thirlmere Lake. 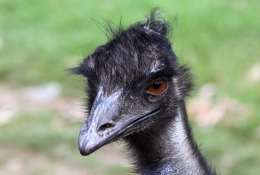 An emu at Wirrimbirra Sanctuary 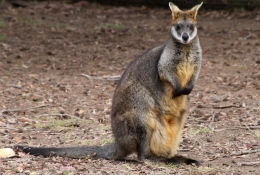 A friendly and slightly bemused swamp wallaby at Wirrimbirra Sanctuary