There was a time when Thirroul was a coal mining village - one of a daisychain of coastal villages north of Wollongong where miners lived and worked in the local collieries. Ever since the electrication of the railway line from Wollongong to Sydney (and Thirroul is one of the major stops on that line) the area has become rapidly gentrified. Today it is a chic suburb with specialist delis and cafes, a fashionable, almost 'inner city' ambience, and a popular beach which attracts crowds during the warm summer months. Hardly surprising because when you read D.H. Lawrence's evocative description of the rocks at the southern end of the beach 'He liked the sea, the pale sea of green glass that fell in such cold foam. Ice-fiery, fish-burning. He went out on to the low flat rocks at low tide, skirting the deep pock-holes that were full of brilliantly clear water and delicately-coloured shells and tiny, crimson anemones. Strangely sea-scooped sharp sea-bitter rock floor, all wet and sea-savage' it is hard not to want to dive into that 'pale sea of green glass'.

Thirroul is located 71 km south of Sydney via the Princes Highway (M1, F6) and the Bulli Pass. It is only a couple of kilometres to the north of the Bulli Pass Road on the Grand Pacific Drive.

It is said that the word Thirroul comes from a Wodi Wodi Aboriginal word, 'thurrural', meaning 'the valley of the cabbage tree palms'. This was challenged by a Wodi Wodi elder in 1892 who argued that 'thirroul' meant nothing and the word was actually 'throon' meaning 'bush leech'. Apparently leeches abounded in the rainforest on the edge of the escarpment.

'Wyewurk' - D.H. Lawrence's House
Wyewurk is a private dwelling and not open for inspection. However if you go to Craig Street at the southern end of Thirroul you can participate in the magic of the presence of novelist D.H. Lawrence. There is a D.H. Lawrence Reserve at the end of the street with a plaque depicting the phoenix (one of his most enduring symbols) and with a homage which reads: "This monument is a tribute to DH Lawrence, one of the greatest writers of the 20th Century, who came here in 1922 and stayed in this street. It was during his stay in Thirroul that he wrote his Australian novel Kangaroo. This novel gives us an invaluable description of the land and the sea around Thirroul, as it was in the 1920s. 'And so the great tree-covered swoop upwards of the tor, to the red flame of clouds, red like the flame flowers, of sunset.' D.H. Lawrence, Kangaroo." It was unveiled on 21 November, 1998.

From May to August 1922 Lawrence lived at 3 Craig Street, a Californian-style bungalow with very strong Australian Federation overtones. Looked at from the street (it is behind a high fence) the visitor gets no idea of the view but the view from D.H. Lawrence Reserve is very similar. It is also possible to go down onto the beach through the reserve and walk around the rocks below the house. In Robert Darrock's D.H. Lawrence in Australia the experience is quoted as "He liked the sea, the pale sea of green glass that fell in such cold foam. Ice-fiery, fish-burning. He went out on to the low flat rocks at low tide, skirting the deep pock-holes that were full of brilliantly clear water and delicately-coloured shells and tiny, crimson anemones. Strangely sea-scooped sharp sea-bitter rock floor, all wet and sea-savage" and Lawrence described Wyewurk as "The house inside was dark, with its deep verandahs like dark eyelids half closed...overlooking the huge rhythmic Pacific."

* Shortly after the settlement of Port Jackson in 1788 George Bass and Matthew Flinders, accompanied by their servant William Martin, sailed down the coast in an eight-foot (2.4 m) rowing boat, Tom Thumb,  in 1796.

* In August 1797 George Bass sought Governor Hunter's permission to take two of the three survivors from the Sydney Cove and return to the Illawarra to investigate the survivor's reports of coal in the area. He set out in Governor Hunter's whaleboat, passed the cliffs of Royal National Park, and discovered coal north of Thirroul at what is now known as Coalcliff. The journey lasted only eight days.

* The first Europeans to settle in the area were timber cutters who were chopping down the rich harvest of cedar as early as 1812. They dragged the logs to the beaches and shipped them to Sydney.

* In 1815 Charles Throsby opened up the Illawarra to settlement when he created a track down Bulli mountain. He was looking for pasture for his cattle.

* In 1821 Governor Brisbane granted 300 acres to Cornelius O'Brien who established a farm in 1823 on the land that stretches inland from Sandon Point. In 1836 O'Brien sold his land to Captain Robert Marsh Westmacott who was enterprising and, during the next decade, purchased more land, bred and raced race horses, established a brickworks, cut a proper track down from Bulli Tops and established the first coal mine in the area. He returned to England in the 1840s.

* In the 1860s people started to settle in Thirroul. They built houses on the hills because the beach area was swampy and prone to flooding. The town was known as North Bulli until 1880 when it was named Robbinsville. In 1892 this was changed to Thirroul.

* By the 1880s Thirroul had become a popular holiday destination and beach resort. It remained popular but the more efficient rail service meant increasing numbers of people did not stop and consequently it was in slow decline until 1987.

* In 1922 the English writer, D.H. Lawrence, stayed in Thirroul and wrote the novel Kangaroo.

* In 1987 the rail from Sydney to Thirroul was electrified. Thirroul became a major train stop on the Illawarra line and over the next twenty years it has become a popular commuter belt suburb with house prices rising dramatically and chic restaurants and cafes becoming part of the town.

* In 1992 the famous twentieth-century Australian painter Brett Whiteley died from a heroin overdose at the Oral Eagle Motel, now the Thirroul Beach Motel.

The Wollongong region has two major visitor information centres. The first is located at Bulli Tops just off the Princes Motorway, is known as the Southern Gateway Centre, and can be accessed by either going to http://www.southerngatewaycentre.com.au/ or tel: 1800 240 737. The second, known as the iHub Centre is at 93 Crown Street and can be accessed by going to http://www.visitwollongong.com.au/ or tel: (02) 4267 5910. Both these information centres can help with information about Thirroul. 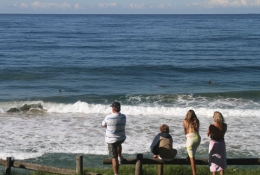 Watching surfers at the southern end of Thirroul beach. 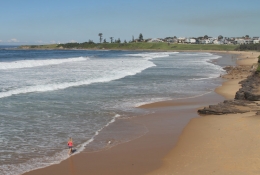 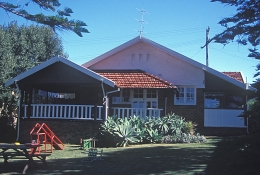 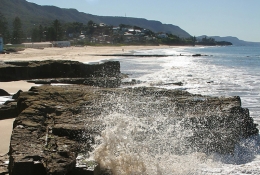 The rocks below D.H. Lawrence's house, Wyewurk, "all wet and sea savage'.