Although it is primarily a ski destination in the winter months, Thredbo Village is an all year resort. This delightful township, located below the snowline and perched precariously on the side of a hill looking across at the ski slopes and the chairlift, is as close as Australia will ever get to a genuine "European style" alpine settlement. The chalets with their steep roofs, the lodges which look as though they have been lifted from Austria or Switzerland, the narrow winding streets, the skiing and bracing 'mountain walks' ambience all help to make this important ski town in the Snowy Mountains like no other town in Australia. Apart from skiing it also provides for summer activities - golf, tennis, abseiling, mountain biking and trout fishing. The Kosciuszko Chairlift is open 365 days and from the top the hike to the summit of Mount Kosciuszko is a 6 km stroll. The village's primary attraction is the snowfields between June and October which attract capacity crowds of enthusiastic skiers. The surrounding mountains boast one of the largest snow making systems in the southern hemisphere (now very necessary with the advent of global warming), the longest ski runs in Australia and facilities to explore the back country and enjoy cross country skiing. There is night skiing on Thursday and Saturday nights and a Flare Run and fireworks display every Saturday night.

Thredbo is located below the snowline on the Alpine Way 43 km from Jindabyne, 495 km from Sydney via the Hume and Monaro Highways and 1370 m above sea level.

No one is sure what "thredbo" means or whether it is a Yaitmathang, the Wolgalu, Wiradjuri or Ngarigo word but it was being applied to the river and the valley as early as 1840.

Summer activities
Thredbo is primarily a winter ski resort but it has also gone to a lot of trouble to make the summer an attractive option with a village golf course, tennis courts, mountain bicycling facilities, horse riding, fly flying, Alpine hiking and walks where the main activity is admiring Alpine wildflowers.

The Walk to the top of Mount Kosciuszko
I have walked from the Kosciuszko Chairlift to the top of Mount Kosciuszko twice. This is a description of one of those walks:
“If there is one continent on Earth where reaching the top doesn't require crampons, ropes, oxygen and ice picks, and where lunacy can be replaced by leisure, then it is this land 'girt by sea'.
Mount Kosciuszko stands a very modest 2228 m above sea level. It can be reached either by walking from Charlotte's Pass on the Summit Walk (a healthy 9 km each way) or from Thredbo which is 1370 metres above sea level. That means if you walked from Thredbo to the highest point on the continent you would have to clamber up 858 metres. The ski lift, even in the summer months, will gently lift the intrepid climber to the Crackenback Terminal which, at 1930 metres means you travel the first 560 metres sitting on a ski lift and means that the climb to the continent's highest point - a distance of some 6 kilometres - involves scaling a further 298 metres. A quick mathematical calculation reveals that you will be dealing with a slope of a little over 4 degrees
It is 12 km from Crackenback Terminal (1930 m) to Kosciuszko (2228 m) and back. About 6 km each way. Sensible walking shoes, comfortable clothes, some provision for a sudden change in the weather (it is a little-known fact but snow falls on Kosciuszko every month of the year), some liquid and something to munch on, and a modest level of determination and you will, after a couple of hours, be standing on the continent's highest point.
National Parks and Wildlife, in their wisdom and with a fine sense of preservation of the natural environment, have created a walkway made of concrete, elevated metal grids and well-prepared gravel all the way from Crackenback Terminal to Kosciuszko.
We trudged on along the concrete path, paused to gaze at the icy waters of Ramshead Creek, crossed a metal footbridge and walked up the slopes grateful for the assistance offered by the metal grids.
On each side of the track the mountain meadows were awash with delicate pink, white and yellow summer flowers. Dour grey granite outcrops, glaciated and exposed, surrounded us. Hardy tundra-like grasses covered the marshy landscape. The air was bracing and healthy.
We paused again at Kosciuszko Lookout (2km from the ski lift) where you can see, off in the distance and flecked with a couple of patches of remnant snow, the top of the mountain.
Lake Cootapatamba, a modest little stretch of water not much larger than a decent-sized dam on a rural property, is Australia's highest lake. You don't need to be a geologist or geographer to recognise its glacial origins.
For those who are simply happy to enjoy the view from the lookout above Cootapatamba there are wonderful vistas across the mountains to the west which rise on either side of the Murray River and, from this point, you can see climbers, as small as ants, clambering up the slopes of Kosciuszko.
At Rawson Pass the metal grids give way to a well-gravelled path for the final 128 metre assault on the summit. NPWS have been so respectful of age and exertion that they have wound the final section around the contours of the mountain which means that even the term 'gentle incline' overstates what you actually undertake.
It is worth the effort. The views, all 360°, are delightful. Rolling, barren hills stretching to the horizon in every direction. A daisychain of brightly coloured walkers making their way to the mountain along the paths from Thredbo and Charlotte Pass. The distant, gum-covered hills smudged with eucalyptus blue. And, always, that air: so fresh and so invigorating.
Of course 'climbing' Mount Kosciuszko is worth doing. It really should be on that imaginary list every self-respecting Australian has hidden in the 'essential things to do' region of their brain. It is pleasant. It is easy. It is hugely enjoyable. And, when you have done it, you can bask in the glory that once you stood on the highest point between the Andes and East African Plateau. Just don't tell anyone you had to walk up a 4 degree slope to achieve the feat.

Walking in the Area
The Thredbo Information Centre has a brochure (and a map) which outline the diverse range of walks in the area including some easy ones around the village as well as a number on the mountain tops. There is an excellent, downloadable map of all the walks in the valley. Check out https://www.thredbo.com.au/wp-content/uploads/2016/04/Thredbo-2016-trailmap_160422.pdf. Walking in summer can be a problem because of the large and rather vicious blowflies. You have been warned.

The Bundian Way
The first Aboriginal pathway to be listed on the NSW State Heritage Register, the Bundian Way is a planned 265 km Aboriginal walking route from Fisheries Beach at Eden to Mount Kosciuszko. The decision to develop the track was inspired by G. A. Robinson’s story of an Aboriginal man named Al.mil.gong who walked from Omeo to present his new corroboree to his kin at Bilgalera (Fisheries Beach on Twofold Bay) in 1844.

It also follows the track taken by the Yuin people when they made their annual journey into the mountains to feast on the rich supply of bogong moths and to meet with the other groups in the area to deal with tribal and cultural matters. Equally it was a track used by the Ngarigo people of the Monaro and the Yaitmathang of Omeo in the mountains when they descended to the coast for whaling in the springtime. It is early days for this development but it is hoped that it will be established as a rare walking experience. One of the great Aboriginal walking tracks of south-east Australia. Check out http://www.bundianway.com.au for more information.

Recent Developments at Thredbo
When Greater Union purchased Thredbo in 1987 they were committed to modernisation. Since then they have been involved with:

* Development of cutting edge snow sports programs for children, adults and those after the ultimate rush

* The development of a respected and impressive summer events calendar

* The construction of the community centre, chapel and ski patrol lodge

For more information check out https://www.thredbo.com.au/village-life/about-thredbo/#tab-history.

* There is evidence that four Aboriginal language groups - the Yaitmathang, the Wolgalu, the Wiradjuri and the Ngarigo - moved into the area in the summer months but few stayed during the cold winters. They were probably in the area for over 8,500 years before Europeans arrived.

* In 1823 Captain Currie and Major Ovens sighted the mountains in the area.

* By 1840 the explorer Stewart Ryrie was travelled through the area. In that year the Polish-born explorer, Count Paul Edmund Strzelecki reached the summit of Mount Kosciuszko.

* In 1851-1852 Reverend W B Clarke undertook a geological survey of the entire region.

* Thredbo as a village came into existence as the Thredbo gold diggings in the 1860s and while the river bed had little gold the miners persisted until 1872.

* Tourism to the Snowy Mountains started in 1906. Around that time the Hotel Kosciuszko and Yarrangobilly Caves House were built.

* In 1944 the Kosciuszko State Park was established.

* 1949 saw the start of the Snowy Mountains Hydro Electricity scheme.

* In 1955 the Kosciusko Chairlift and Thredbo Hotel Syndicate was formed by a Czech named Tony Sponar.

* A 99 year lease over the area was granted to the syndicate in 1957. The syndicate was renamed Kosciuszko Thredbo Limited.

* In 1987 the Greater Union Organisation purchased the lease.

There is a useful local website. Check out https://www.thredbo.com.au. Also https://www.discoverthredbo.com has useful information. 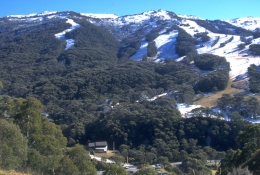 Thredbo Valley and some of the ski runs above the valley. 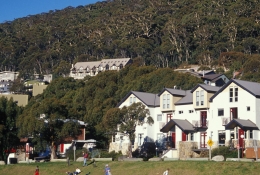 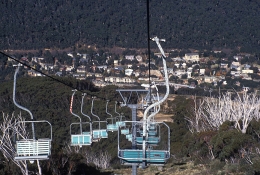 Thredbo Village from the ski lift to Crackenback. 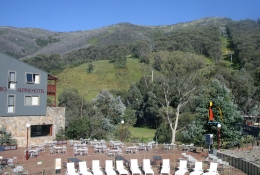 The Thredbo Alpine Hotel in the summer months. 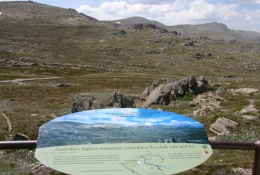 A sign indicates the low lying hill that is Australia's highest point. 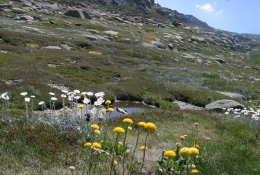 Summer flowers and granite outcrops on the path up to Mount Kosciuszko. 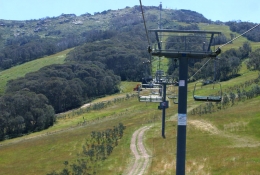 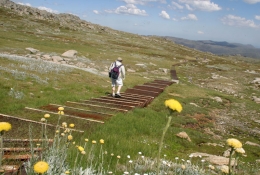 The path up to Mount Kosciuszko from the Thredbo chairlift.