Wheatbelt town known for its talc mine and its wildflower displays

Three Springs is a typical northern wheatbelt town. It is surrounded by fields of wheat which stretch to the horizon and, like most wheatbelt towns, life focuses on the grain silos, the railway line, the hotel and a main street which provides services for the surrounding farmers. It is known as a haven for people wanting to enjoy the richness of the Western Australian wildflower season.

Three Springs is located 325 km north of Perth via the Midlands Road.

The area was officially surveyed in 1867 and it was at that time that the surveyor, C.C. Hunt (famous for the wells he dug through the wheatbelt), recorded on his map the name 'Three Springs'. It was simply descriptive. There are three springs in the area.

A Heritage Stroll around the Town
There is a pleasant stroll around the town which includes the historically interesting buildings. All of the buildings - the Commercial Hotel, the National Bank, the Post Office, the Three Springs Hall, the historic homestead of Kia Ora; - have detailed information on boards outside them. If you want to read the boards before you visit the town, check out the remarkably detailed Nussbaumer Web Blog which can be accessed at https://nussbaumerweb.wordpress.com/2016/08/26/days-71-72-three-springs.

Talc Mine
Located 13 km east of the town on the Three Springs–Perenjori road is the Talc Mine. The talc deposit was discovered in the 1940s and the mine started operating in 1948. Over the years it has been owned and operated by a number of different mining companies. It is currently operated by Imerys Talc and produces 240,000 tonnes of talc a year. The talc is ground into fine grains which are used in cosmetics, plastics, ceramics, paint and paper making. Some is also sold for use as carving blocks.
The Mindat website (https://www.mindat.org/loc-123068.html) explains the geology: "Three Springs is a magnesium carbonate sub-horizontal orebody, trending north, with a maximum width of 200 metres, and thickness of a few metres to 30 metres. It produces some of the whitest and purest talc ores, although the talc varies in colour from white to dark green. This is governed by the amount of chlorite in the ore.
The talc occurs in the Noondine Chert, which is a member of the Coomberdale sub-group. The Noondine Chert is a silicified carbonate containing significant dolomite. The talc mineralisation extends 70 kilometres south from the Three Springs mine, containing a number of significant deposits. The talc is thought to have formed by hydrothermal fluids from dolerite dykes intruded into the carbonates.
The sequence from the surface is up to 6 metres thick red-brown soils, talc rubble, and discontinuous chert bands; stromatolitic talc 0-6 metres thick; compact massive talc 0-12 metres thick; then thin cross bedded quartzite, pebbly then talc horizon. This is intruded by north trending dolerite dykes. The talc units thin to the north grading into talc arenite, and orthoquartzite." Check also http://mininglink.com.au/site/three-springs for more information. There are samples available at the Three Springs Visitor Centre.

Talc Mine Lookout
There is a signpost to the lookout off the Perenjori-Three Springs Road some 10 km east of Three Springs, the dirt road rises up to a viewing point where it is possible to have a clear overview of the mine site. The lookout is clearly part of the "Exploring Wildflower Country - Midlands Way" route and the lookout provides information on the miners (complete with an image of a miner pushing a box-like wagon, which explains that "Between 1948 and 1960 mining here was all underground. A machine called an 'air leg driller' bored holes for explosives, and the shattered blocks of talc were then loaded onto box-like wagons and - mostly - winched to the surface on narrow-gauge rails. Drillers spent most of the day working about 40 metres underground, and many of the workers were recent migrants from Britain or Europe."

Wildflowers
The area around the town is known for the wildflowers which bloom between August and October. There is a wildflower rest area at the southern end of town and the Visitor Information Centre is open during this time to specifically cater for those people driving through and wanting to see the wildflower displays. There is an impressive native garden and herbarium at the Visitor Centre.

A New Way to Explore Western Australia’s Wildflowers
A full and comprehensive exploration of Western Australia’s wildflowers has always been a challenge. On one level they are everywhere. On another level, specific and rare wildflowers can be very difficult to locate.
The truth is that there are over 12,000 floral species and 60% of them are found nowhere else on the planet. Yes, it really is that remarkable.
Now, at last, in a miracle of political co-operation, nine local councils – Moora, Dalwallinu, Coorow, Perenjori, Carnamah, Three Springs, Morawa, Mingenew and Geraldton – along with some help from the WA state government, have come up with an excellent solution.
Historically trying to see the specific rare flowers was a logistical nightmare. When I first explored the wildflower area I can remember that I innocently asked where I might see a wreath flower (they are a flower which naturally forms itself in a circle like a wreath) at the local coffee shop in Morawa. Morawa is one of the famed locations for this unique plant.
I was told that there were some in the area but the person who knew was at the information office. At the information office I was advised, and this is verbatim, to "drive down the main street until you see the road that crosses over the railway line, drive across the line and past the Police Station and Fire Station (or is it the SES), turn right at the next road, continue up past the sheds for a couple of hundred yards and you'll see some beside the road". Absorbing the instructions I headed off and three minutes later, having noticed a sign reading "Wreath Flowers" on a fence, I found the plant.”
Yes, it really was that complicated. Locals were happy to help but it meant wandering around until you stumbed upon an expert ... unless you booked a coach tour with a gardening expert.
What the shire councils and the state government have done is take that kind of specific information and turn it into two, brilliantly constructed, wildflower routes through Western Australia’s Wildflower Country.
They have created two routes – The Wildflower Wayand The Midland Route. The structure is inspired. There are a total of 38 places where the visitor, unfamiliar with the complexity of “chasing wildflowers”, is shown some of the floral uniqueness of the area.
The first – The Wildflower Way - starts in Dalwallinu and passes through Perenjori, Morawa, Mullewa and ends up in Geraldton. It has a total of 21 specific locations and, just like the woman who advised me 30 years ago, the instructions are suitably arcane: “Turn off the Mullewa-Wubin Road and travel 3 km on Offszanka Road, then turn left onto North-East Canna Road: site is near church, behind old hall.”
The second – The Midlands Route– runs from Geraldton in the north down through Mingenew, Three Springs, Carnamah and Coorow to Moora.
That’s the challenge. Wildflowers grow in the most unlikely places – and they seem to be in the same place year after year. To help, each floral site has a logo of four flowers and a steet silhouette sculpture - so, hopefully, you won’t get lost.
The result: for the first time people wanting to see the wildflowers in all their diversity have logical maps and sensible signage to guide them.
The time to go and experience this unforgettable floral display: between the end of July and September. And, one word of advice, book your accommodation well ahead. Those tiny wheatbelt towns really don’t have very much accommodation and, quite frankly, some of it is very, very basic. There is more information at http://wildflowercountry.com.au. It is a hugely useful site.

Pink Lakes
Located 8 km east of Three Springs on the Perenjori-Three Springs Road are a series of lakes known as the Pink Lakes. In spring the lakes turn pink in colour. The colouration of these saline lakes is particularly clear on overcast days. It is caused by carotene from a type of algae which gives the lake a distinct pink hue.

Yarra Yarra Lakes Nature Reserve
The Yarra Yarra Lakes are located 16 km south of Three Springs. They are an intermittent salt lake system which is home to flocks of swans, pelicans, ducks and the Siberian stilt. Keen birdwatchers are attracted by the diversity of species. They can be accessed from the Midlands Road and also from a road heading south of the Eneabba-Three Springs Road. The lake is 25 km long and 9 km wide and covers 119 square kilometres. Check out http://www.carnamah.wa.gov.au/visitors/yarra-yarra-lakes for directions and more information.

Dookanooka National Park
Located 18 km south west of Three Springs on the Eneabba-Three Springs road is a large stand of natural bushland which is impressive with its wildflowers in the spring and is home to a rich variety of native fauna.

* Prior to the arrival of Europeans the area was home to the Amangu Aboriginal people.

* The area was first explored in 1846 by the Gregory brothers (Augustus, Henry and Francis) who were looking for new country for settlement.

* In the early 1850s the Cooke family took up a holding of 17,500 acres which was known to the local Aborigines as 'Carridena'.

* The area was officially surveyed in 1867 and it was at that time that the surveyor, C.C. Hunt, recorded on his map the name 'Three Springs'.

* In 1905 the government opened up land in the area. It was known as the Kadathinni Agricultural Area.

* In 1906 the land to the west of the railway line was offered for sale.

* In 1907 a town was declared next to the railway siding.

* Kadathinni township was gazetted in 1908. That year saw the opening of the town's school.

* The town's first postal service was opened in 1910 in the local store.

* The first railway station master for Three Springs was appointed in 1911. The Catholic Church was consecrated that year.

* The town's first Methodist minister was appointed in 1914. That year saw the telephone connected to six subscribers.

* The Three Springs Road Board was established in 1929.

* In 1931-1932 the district produced the highest average wheat production in the state.

* The Anglican Church of St James was consecrated in 1932.

* In 1946 Kadathinni was officially changed to Three Springs.

* In 2006 a water feature was built in the town to celebrate the centenary of settlement. 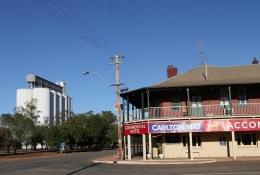 The silos and the Commercial Hotel 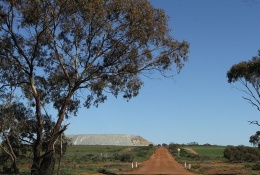 The road to the Three Springs Talc Mine lookout 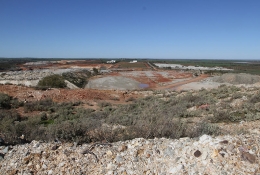 Talc Mine from the Talc Mine Lookout 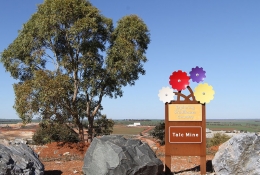 The “Exploring Wildflower Country” logo at the Talc Mine Lookout 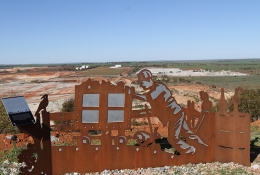 The silhouette of the miner at the Talc Mine Lookout 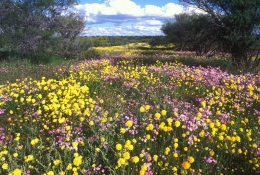 Fields of wildflowers are everywhere in the spring months 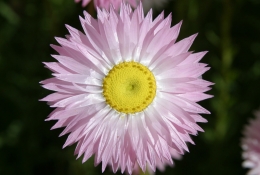 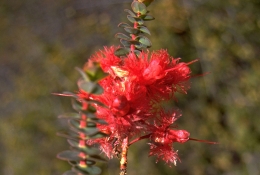 The beautiful Verticordia is common in the district