There are really only four towns of any importance in the Northern Territory - Alice Springs, Darwin, Katherine and Tennant Creek. The rest are tiny settlements, roadhouses, Aboriginal outstations or pubs serving the surrounding areas. Ti Tree is one such tiny settlement. Its main claim to fame is that it is the closest settlement to Central Mount Stuart, the geographical centre of Australia. The land around Ti Tree is flat and inhospitable. The Reynolds Ranges in the south-west and the Watt Ranges in the north-east only break the flatness.

Ti Tree is a tiny township located on the Stuart Highway 194 km north of Alice Springs and 1303 km south of Darwin.

The origin of the town's name is unknown. Was it a variation of Tea Tree as, by 1888, there was a place called Tea Tree Telegraph Reserve? Why was a well, dug during the construction of the Overland Telegraph south of the town, called Ti Tree? Or was it Tea Tree?

Central Mount Stuart
When the visitor drives north from Ti Tree (approximately 18 km north) they can see a prominent hill (it is 754 m above sea level and officially Australia's 635th highest mountain) on the western side of the Stuart Highway. This is Central Mount Stuart, the one significant feature closest to the geographical centre of Australia.
John McDouall Stuart first sighted the hillock in his first crossing of Australia.
In 1860 Stuart wrote in his journal, “Monday, 23rd April, Centre. Took Kekwick and the flag, and went to the top of the mount … Built a large cairn of stones, in the centre of which I placed a pole with the British flag nailed to it. Near the top of the cone I placed a small bottle, in which there is a slip of paper, with our signatures to it, stating by whom it was raised. We gave three hearty cheers for the flag….”
Stuart raised the British flag on the mountain in the belief that Central Mount Stuart represented the geographical centre of the Australian continent. The original note left by Stuart is now in the South Australian State Library.
A plaque in the Central Mount Stuart Historical Reserve reads: 'John McDouall Stuart and William Kekwick ascended and named Mount Sturt on 23 April 1860. Later the name Mount Sturt was changed to Central Mount Stuart in honour of the explorer. Stuart's other companion on this expedition was Benjamin Head.'
It is possible to climb the mountain but it involves walking across unmarked land and making your own route up the mountain. It is estimated that the walk and climb takes about one and a half hours from the base of the hill. In 1988 I spoke to the policeman at Ti Tree, who has climbed Central Mount Stuart twice, he pointed out that both times he had failed to find the cairn which Stuart claimed to have constructed.

Art Galleries
Ti Tree Station was sold to the Aboriginal Land Fund Commission in 1976 and it is now part of the Ahakeye Land Trust. The local people are known as exceptional artists (both Clifford Possum Peltharr and Emily Kngwarreye were from the local group) and consequently the art galleries in Ti Tree are well worth visiting.
The Red Sand Art Gallery website notes: "Established in 1998 at Ti Tree, 190km North of Alice Springs, Red Sand is a well known and reputable dealer in fine Aboriginal art from the Utopia Homelands and regions surrounding Alice Springs in Central Australia. Whilst the artists of Utopia are predominantly of the Anmatyerre and Alyawarre language groups, Red Sand also works with Warlpiri, Pintupi and Pitjantjatjara artists from the western desert."

Ryans Well Historical Reserve
Ryans Well Historical Reserve is located 65 km south of Ti Tree.  Its name celebrates the work of Ned Ryan (1835?-1893) a stonemason who, with a team of workers, sank a large number of wells along the Overland Telegraph Line.
Ryan was a legendary bushman who had accompanied the little-known explorer, John McKinlay, during an attempted survey of Arnhem Land in 1866. McKinlay's 15-man expedition were caught by the arrival of 'the wet' and trapped on the banks of the crocodile-infested East Alligator River. Ryan gained fame when he, and a fellow bushman, constructed a raft from the skins of 27 packhorses. The story is told of how the raft blew 13 km out to sea before managing to arrive safety at Escape Cliffs.
In 1868 Ryan joined George Goyder's survey team and helped build the outpost which grew into Darwin. Between 1885-1890 Ryan led a team which sank wells throughout the Territory. The aim was to provide reliable water which, hopefully, would encourage graziers to move into these harsher areas of the Northern Territory. The well that Ryan and his team constructed in 1889 "when first dug was 79 feet deep with a shaft 6 feet by 4 feet wide. A stone dump above the well was at a height required to fill 38 feet of wooden water trough. The well at this time was thought to have been fitted with a hand windlass and two 8 gallon buckets, and produced water at the slow rate of 1700 gallons per 24 hours." Drovers and travellers used it until the 1930s.
Over the road are the remains of the Glen Maggie Homestead. The Parks and Wildlife Commission's Plan of Management explains that "In late 1913 Samuel Nicker acquired an annual license for land surrounding Connor Well and 200 square miles around Ryan Well. In August 1914 Samuel Nicker, his wife Elizabeth and their children settled at Ryan Well. The Nicker’s earliest permanent dwelling was constructed of mulga uprights with clay filling the gaps between the timbers. The doors and prop open windows were made of old iron water troughing beaten flat. Nicker named the homestead “Glen Maggie” after his daughter Margaret. A woolshed constructed of bush timber was constructed alongside the house.
"In 1918 or 1919 a two room stonework wing comprising a main bedroom and a living room with fireplace was erected alongside the original dwelling. This stone structure, which had bush timber roof framing and corrugated iron roof, is the remains of Glen Maggie Homestead which can be seen today.
In 1921 a non-official post office was opened at Glen Maggie Homestead as the building was located on the Overland Telegraph Line. This was upgraded to a telegraph office in 1923." In 1932 Glen Maggie became well known as the last supply point for miners heading north-west to 'The Granites' gold rush. The building was finally abandoned in 1935 and the Telegraph Office was moved north to Aileron Station.
Ryans Well and Glen Maggie Station are worth a visit as they offer a unique insight into the hardships of the early Europeans in the area. A detailed plaque beside the well describes the complex process of raising water. It offers a glimpse into the early history of Central Australia. For more information check out http://www.parksandwildlife.nt.gov.au/__data/assets/pdf_file/0015/3165/ryan_pom.pdf

* Prior to European settlement the Anmatyerre Aboriginal people lived in the area for at least the last 10,000 years.

* the first European to pass through the area was John McDouall Stuart and his expedition in April, 1860. They continued north until a lack of supplies and attacks from the Warumungu Aboriginal people forced them to abandon the journey at Attack Creek, north of Tennant Creek.

* In 1870-71 the team constructing the Overland Telegraph Line (and following McDouall Stuart's original route) passed through the region. They built a number of wells in the area calling them, imaginatively, Tea Tree Well No. 1, No. 2 and No. 3.

* In 1888 an area of land which included the wells was set aside as the Tea Tree Telegraph Reserve.

* In 1919 the pastoralist W. J. Heffernan was granted a lease to land which he named Tea Tree Station. It was believed that the Overland Telegraph wells ensured good, reliable water but this was not the case. A report in 1935 recorded that there was little improvement to the land. Heffernan died in 1969. His widow continued to work the property.

* In 1975 Ian Dahlenberg, an early researcher into the diversity of fruit crops in Central Australia, took up 258 ha of Tea Tree station and established Dahlenberg Horticultural Enterprise which successfully grew grapes and watermelons.

There is no dedicated visitor information centre in Ti Tree but you can get information from the Ti Tree Roadhouse Caravan Park, Stuart Highway, Ti Tree, tel: (08) 8956 9741.

Check out the video at http://www.barklytourism.com.au/ti-tree.html 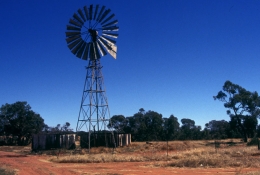