Tibooburra is a true outback town. In the summer months it is unbearably hot. It has a small, hardy population whose primary function is to keep the town's two hotels, motel rooms, caravan park, cabins, roadhouse and local store running effectively. There is a National Parks and Wildlife Service office which is responsible for the vast desert wasteland that is the Sturt National Park.

Tibooburra, which is 183 m above sea level, is located 1,290 km north-west of Sydney via Dubbo and 1,638 km via Wagga and Mildura. It is 847 km north of Adelaide and 332 km north of Broken Hill via the Silver City Highway.

It is thought that Tibooburra meant 'heaps of rocks' or 'place of stones' in the language of the local Wangkumara and Maljangapa peoples. It is probable that the word is derived from the Wangkumara language. One interpretation suggests that the name derives for a story about how "two men came from Innamincka and asked people for rainstones. They were refused and mocked and in revenge sent a hail storm that turned everyone, including themselves, to stone." Another story tells of three upright rocks, known as the 'Three Brothers' which were said to be three ancestors of the Wangkumara tribe who were turned to stone for marrying women from another tribe.

The Family Hotel
The best reason for going to Tibooburra is the Family Hotel. It was built from local sandstone in 1882 by Francis Bladon and originally known as Tattersall's Hotel. In 1887 it became Downie's Family Hotel and since then it has always been known as the Family Hotel. It has had 18 owners over the years. The fame of the hotel lies in the remarkable murals on the walls. In the 1960s three artists - Clifton Pugh (famous for his portrait of Gough Whitlam which now hangs in the National Portrait Gallery), Russell Drysdale (one of the country's most important painters of rural life) and Rick Amor travelled to Tibooburra to paint the outback. They stayed at the Family Hotel and during their stay they painted murals on the walls. The most famous is the large mural painted by Clifton Pugh which takes up an entire wall beside the bar. Over the years other artists have added to the art work so that the pub is now a very special kind of outback art gallery. For more information tel: (08) 8091 3314.

Tibooburra Keeping Place
Located in Briscoe St, the Keeping Place was opened in 2001 and contains "what is left of the Aboriginal history that was once so rich in Tibooburra." It includes a display of local photographs and indigenous artefacts of wood and stone (mostly boomerangs and spears) from the Wangkumara and Malyangapa people. The Keeping Place is open weekdays from 9.00 a.m. to 5.00 p.m., tel: (08) 8091 3435.

Tibooburra Pioneer Park
At the end of the main street is the Tibooburra Pioneer Park which was officially opened on 17 July 1999. The park's centrepiece is a remarkable sculpture - part of the Silver City Sculpture Project - which is titled Myth and Mirage 1999. It was created by South Australian sculptor, Anthony Hamilton.
The sign beside the sculpture explains its genesis. "In 1843 Captain Charles Sturt held the conviction that Australia's interior was occupied by a central inland sea, not far from the Darling River, believing Eyre's Lake Torrens to be an estuary attached to it. In the following year, leaving from Adelaide, Sturt's well equipped expedition struggled against shimmering horizons and ever increasing hardships, suffering from extremes of heat and the waterless nature of the country in search of 'any body of water of unknown extent'.
"Sturt's search is believed to have ended somewhere near present day Tibooburra, and it was at Depot Glen, 40 km south west of Tibooburra, that Sturt abandoned the 30-foot, 12-oar whaler boat that had been brought with the expedition (Depot Glen is approximately 12km from present day Milparinka).
"It is these historical events that artist Anthony Hamilton has drawn on to create the work of art that is placed in Tibooburra. Hamilton has commissioned an exact replica of Sturt's whaler boat that has been suspended upside down between poles several metres above the ground."
"My feeling is that basically it is a land of mirage, and that the inland sea was a fiction, which is why I am mounting the boat upside down, and up in the air, between four poles ... a lot of my work has despair and abandonment in it," Anthony Hamilton has said of the work.

Tibooburra Outback School of the Air
Located at Briscoe Street, this unique school of the air caters for the children on the outlying properties in the far north west of New South Wales. The best time to inspect is in the morning when the classes are held. It is possible to view and listen to the daily satellite lessons from 9.00 am to noon and every Thursday there is an interactive on-air school assembly from 9.00 am - 10.00 am. Check out http://www.tibooburra-d.schools.nsw.edu.au/home for more information or tel: (08) 8091 3317. It is best to book if you want to visit.

Sturt National Park
Located 66 km north of Tibooburra via the Silver City Highway, the Sturt National Park covers 344,000 ha of the outback. It was dedicated as a National Park in 1972 after years of degradation by five pastoral properties. It has been estimated that between 1880-1910 more than 50% of the wildlife was driven from the area and the land was so overstocked that most of the edible saltbush and copper-burr was destroyed.
The park's topography moves from 15 metre high red sand hills through claypans to dry creek beds, small rocky gorges and gibber plains (stony desert) to 'jump-up' country - ie isolated mesas which rise above their flat surroundings to a height of 150 m.
The flora is predominantly mulga bushland and arid shrubland, although desert wildflowers are common after heavy rains.
The park's fauna includes red kangaroos, euros and a large variety of birds including emus, dotterels, wedge-tailed eagles, kestrels and babblers. A lake appears occasionally providing a temporary haven for waterbirds.
Drives and walks are popular in this unique reserve and there are camping places at at Dead Horse Gully, Mount Wood, Olive Downs and Fort Grey. The best time to visit the park is from April to September.
There are two self-guided drives which provide a good overview of the territory - the 2-3 hour Gorge Loop Road (100 km) (check out http://www.nationalparks.nsw.gov.au/sturt-national-park/gorge-loop-road-drive/car-touring) and the Jump-Up Loop Road (110 km), the latter taking in the ruins of Mount King homestead and woolshed. There are walking trails with interpretative signs to the summit of Mount Wood (check out http://www.nationalparks.nsw.gov.au/sturt-national-park/mount-wood-summit-walking-track/walking), where the panoramic view is excellent, and at Fort Grey (a short loop walk) where Sturt's party built a stockade to protect their supplies and prevent their sheep from wandering. At the rest area a kilometre south of Olive Downs Homestead (1880s) there are two Jump-Up walks. Check out http://www.nationalparks.nsw.gov.au/sturt-national-park/jump-up-walking-track/walking for details.

The park also stretches across to Cameron Corner (named after NSW Lands Department surveyor John Brewer Cameron) where New South Wales, South Australia and Queensland all meet. Located 140 km north-west of Tibooburra, it was once a well-known stopover point for those headed to Innamincka along the Strzelecki Track.

The park contains relics of Aboriginal habitation (mostly middens and stone remnants) and European pastoral history. There is a list of things to see and do in the park at http://www.nationalparks.nsw.gov.au/parks?keyword=Sturt%20National%20Park. This list includes drives, walking tracks, museums and the Sturt's tree walk. The roads are gravel and can be hazardous or impassable after wet weather. Always check at the National Parks and Wildlife Service office, 52 Briscoe Street, tel: (08) 8091 3308 on road and weather conditions.

Dingo Fence
Sturt National Park is bounded along its northern edge by a section of the world's longest fence, the Great Dingo Fence, which spans 5,614 km from the Gulf of Carpentaria to the Indian Ocean. Originally constructed by the Queensland government to halt a rabbit invasion it is still maintained in order to keep wild dogs from sheep grazing areas.

Outdoor Pastoral Museum, Mount Wood
The Outdoor Pastoral Museum is a reconstruction of the "building blocks of early European bush life". Located 25 km east of Tibooburra on the Wanaaring Road it is an outdoor display of items from the old Mount Wood station including a walking beam and whim (a device for drawing water from deep wells in the days before bores and windmills), a wool scour where fleeces were bleached, a dredge, a Tumbling Tommy scoop and well bucket. There are interpretative panels and a brochure is available at the National Parks and Wildlife Service office, 52 Briscoe Street, Tibooburra.

* For 25,000 years prior to the arrival of Europeans the Wangkumara and Malyangapa Aboriginal people moved  through the area. Middens, quarries, camp sites, ceremonial sites, tool production sites and scarred trees still exist as evidence of Aboriginal occupation.

* In 1845 Charles Sturt and his party (there were 16 men, 11 horses and 30 bullocks) reached the area. They were trying to discover an inland sea. While stranded at Depot Glen, beside Preservation Creek (40 km south west of Tibooburra), they explored the corner country, and reached Mount Wood, Cooper Creek and the edge of the Simpson Desert.

* In 1860 Burke and Wills passed through the area on their ill-fated journey from Menindee to the Gulf of Carpentaria.

* In 1861 the land around Tibooburra came under the Crown Lands Occupation Act which allowed for land with a carrying capacity of one sheep for every eight acres.

* In 1880 John Thomson, a tank sinker, reached Wilcannia and announced that he had found gold near Mount Poole.

* By February, 1881 other parties were exploring for gold and by June there were 2,000 miners in the area.

* By the end of 1881 the government surveyed the townsite and built a post office.

* Later in the 1880s a survey team passed through the area trying to map the exact border between New South Wales and Queensland.

* By 1902 Tibooburra was known as "The Poor Man's Fields" and was yielding very little gold. Most of the miners had departed.

* In the 1930s the government moved the local Aboriginal population to Brewarrina.

* In 1999 Pioneer Park was formally opened and dedicated to the Aboriginal tribes, explorers, surveyors, pastoralist and gold prospectors. In this year Myth and Mirage, a sculpture by Anthony Hamilton, was established in the park.

* In the summer of 2012-2013, dubbed The Angry Summer by the Climate Commission, the temperature in Tibooburra reached a new recorded high of 47.9°C.

There is a good local website - http://www.tibooburra.org/ - which provides information about accommodation and eating. 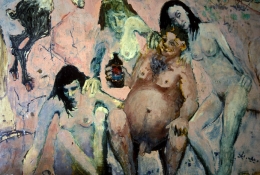 The famous Clifton Pugh painting on the wall of the Family Hotel. Free art with your beer. 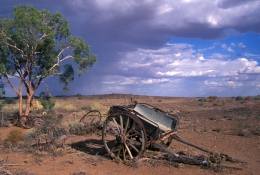 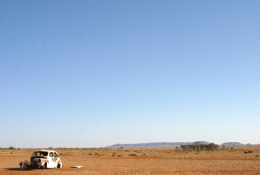 On the road between Broken Hill and Tibooburra 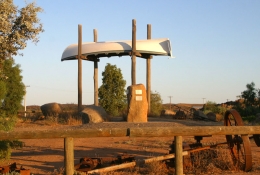 Myth and Mirage - a sculpture by Anthony Hamilton depicting Sturt's whaleboat. Photo taken - late afternoon when it was over 40°C. 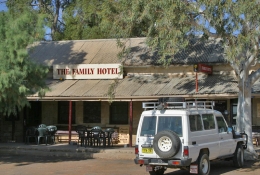 A solitary 4WD outside the Family Hotel