Town famed for its dairy industry and its cheeses.

Timboon is a typical rural centre located in a rich dairy area where the production of milk, cheese and butter is still central to the local economy. It is known in the area for Timboon Fine Ice Cream and Timboon Farmhouse Cheese.  The other major industries in the area are timber cutting and lime production and in recent times the boutique whisky at Timboon Railway Shed Distillery has attracted travellers. There are still substantial quarrying and lime kilns in the district.

Timboon is located 216 km south-west of Melbourne via the M1 and Princes Highway, 299 km via the Great Ocean Road and 17 km north of Port Campbell.

It is believed that the Timboon's name comes from the local First Nation word 'timboun' which was a word used to describe pieces of rock used to open mussels.

L'Artisan Organic Cheese
Formerly known as Timboon Farmhouse Cheeses (it was taken over by a larger company and then a new management team moved in with Matthieu Megard as the cheese maker) this cheese shop and the amusingly named Mouse Trap Cafe have acquired a reputation for their outstanding soft cheeses (they are stocked by prestigious providores in Sydney and Melbourne) notably their camembert and brie. Check out http://www.lartisancheese.com.au/our-cheese.html for details of The Mountain Man, The Extravagant, The Authentic, The Fermier and Fromage Blanc. They are open for sales and tastings from 10.00 am - 4.00 pm each day. Cheese platters and wine as well as light lunches, home made scones, coffee and glorious milkshakes made from local milk and local ice cream, are served in a charming garden setting. For further information contact (03) 5598 3322. They are located at the corner of Ford and Fells Road, Timboon.

Timboon Railway Shed Distillery
There is, according to their website, a long tradition of making whisky (most of it illegal) in the Timboon area. The Railway Shed Distillery is not only proud of its boutique whisky distillery and its liqueurs (Vanilla Vodka, Apple Liqueur, Strawberry Schnapps, Coffee Cream et al)  but it is also the home of an excellent restaurant and is the starting point for the Camperdown-Timboon Rail Trail. Check out their excellent website http://timboondistillery.com.au/ which has a fine photograph of the Trestle Railway Bridge.

Camperdown-Timboon Rail Trail
The delightful rail trail, which was established in 1994 and opened in 2009, starts from Timboon Railway Station and continues through to Camperdown. It is 34 km long and has, as a bonus, the ability to cycle across the trestle bridge at Curdies River.
The railway was originally built to serve the farmers and timber cutters in the Heytesbury Forest. It was a major feat of engineering with 34 bridges and 84 culverts. The most important bridge was the Curdies River Trestle Railway Bridge which was restored in 2010. On the trail you can see blackwoods, woolly tea trees, messmates, tree ferns and cherry ballart and the local fauna includes koalas, kangaroos, sugar glider possums and the habitat for the Powerful Owl. Check out https://www.railtrails.org.au/trails/camperdown-to-timboon/ for detailed information.

Trestle Railway Bridge or Curdies River Bridge
Located near the Val Lime Kilns to the west of town (it can be accessed by heading out of town on the Terang-Warrnambool Road, turning right just after the Shell Service Station and following the signs for 5 km) is the Heritage listed trestle bridge, which crosses Curdies River. Built in 1892 it was closed in May 1987 but when the Rail Track was established in 2009 it was restored and reopened. It has been opened since November, 2010. The Heritage of Australia explains "It was constructed of 20 trestles of large diameter bush timber poles bolted together with sawn timber superstructure and footway in traditional and utilitarian bridge and wharf building technique. The bridge is one of the few surviving railway structures of this type in Victoria and illustrates vernacular bridge building traditions of the late 19th century."

* Prior to the arrival of Europeans the area was inhabited by people from the Girawurung First Nation language group.

* The first Europeans into the area arrived in the 1870s.

* The Camperdown-Timboon railway reached the town in 1892. It was a vital link for the town's dairy and timber industries.

* The Camperdown-Timboon Rail Track was opened in 2009.

The Timboon Distillery has a surprisingly comprehensive website with good photographs and lots of information. Check out http://timboondistillery.com.au/. 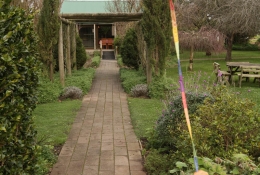 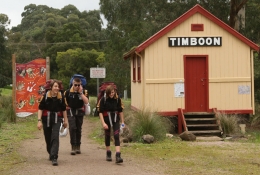 School students at the start of the Timboon-Camperdown Rail Trail. 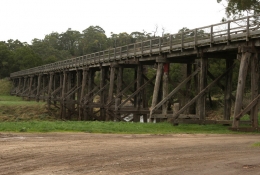 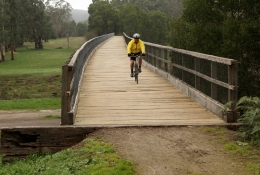 A lone cyclist crosses the Trestle Railway Bridge on the Timboon-Camperdown Rail Trail.