Historic hamlet near the headwaters of the Murray River

Tintaldra is an important historic village which lies beneath the Snowy Mountains. It is located on the southern banks of the Murray River which forms the border between New South Wales and Victoria. In 2017 it was very close to dying. The local hotel, which dates from 1864, was closed and up for sale (it has since reopened) and the General Store, which had been a local museum, had divested itself of many of its historic exhibits. The town was still worth visiting because of its position as one of the towns (only Khancoban is further up river) at the headwaters of the "mighty" Murray and because of its interesting history which is recorded on plaques and monuments around the town.

It is claimed that "tintaldra" is a local Aboriginal word meaning "young man by the water". It was used by the Aboriginal guides who brought Charles Huon de Kerrilleau to the area to show him fresh grass and water.

Tintaldra General Store
The general store, the only shop in the tiny village, was built in 1864 by Edwin Jephcott. It was the decision of the local landowner, Sydney Grandison Watson, who owned the 12,000 acre (4,856 ha) 'Tintaldra' run. The store was the first important building in the village. It was constructed from columns of redgum which supported redgum beams, redgum rafters and wooden shingles which were brought from Shingle Creek. The walls were vertical slats of red stringybark. All of the wood was cut locally. In the 1930s the interior was lined with patterned tin. When it opened it was the local post office with two weekly deliveries from Melbourne - the longest horseback delivery in Victoria. The postmaster was William Armstrong who was paid £15 a year. His brother, Charles Trent Armstrong, managed both the store and the Tintaldra property. By 1873 the store had nearly £7,000 of goods which were brought by bullock wagon from Wodonga and Gundagai. The journey took over three weeks.
In recent times the store has included a craft shop and museum but since the hotel has closed many of the items have been removed. It currently offers tea, coffee and refreshments as well as tourist information. The store is Heritage Listed.

Tintaldra Hotel
The Tintaldra Hotel, closed in 2017, was sold and opened again in 2018. It is a significant historic hotel on the bank above the Murray River floodplain. The original hotel was built by Sydney Grandison Watson around 1864. The present hotel had been built by 1874 and was originally known as the Pet Lamb Hotel.

The Vogel Monument
In the park between the Tintaldra Hotel and the Murray River is a monument - an anvil on a plinth - to the Vogel family. Christian Vogel (1842-1913) established a punt across the Murray River in the 1860s and was, according to the bronze plaque, a "blacksmith, wheelwright, carpenter, dentist, punt builder and operator". The idea of a dentist who is also a blacksmith is not hugely appealing. The plaque records Vogel's wife, Elizabeth, and their eleven children, the youngest of whom did not die until 1961.

The Murray River
The Murray River is an easy walk from the store and hotel. Anyone who has seen the river in South Australia will marvel at how small it is at this point. The picnic area below the bridge is popular for fishing. The area is known for trout and Murray cod. The river is also ideal for swimming in summer. Walwa, further downstream on the Murray River Road, was the home of Australia's first breed of beef cattle, the Murray Grey.

Burrowa-Pine Mountain National Park
Burrowa-Pine Mountain National Park (18,400 ha) is 28 km from Tintaldra. It is characterised by rugged and contrasting mountains and two areas containing very different types of vegetation. The highlights of the park are Bluff Falls, a spectacular set of falls, and Pine Mountain, a huge rock monolith which is one and a half times the size of Uluru although most of its is covered with Cypress pine trees and lichen. There are 180 bird species, including superb lyrebirds, as well there are wombats, kangaroos and black wallabies. All the walks in the park are difficult with Parks Victoria suggesting that even good walkers will average only 1.5-2 km per hour. There are six walks in the park:
1. Bluff Creek Nature Trail - 4 km - 2 hours return - this walk passes beside Bluff Creek and reaches Bluff Falls. There are interpretative panels along the way.
2. The Lookouts Walk - there are two lookouts - Campbells Lookout - 1.4 km - 1 hour return - and Ross Lookout - 6 km - 3-4 hr return. The tracks can be steep but the views are impressive.
3. Pine Mountain Walking Track - there is a short walk to Rocky Knob - 2 km, 1 hour return - and a long, difficult walk - Pine Mountain Summit - 12 km, 7 hours return.
4. Hinces Creek Walking Track - this is a walk to Hinces Saddle. It is 14 km and will take around 7 hours.
5. Mount Burrowa Walking Track - this long walk is 15 km - 10 hours return - to the summit of Mount Burrowa. There is a shorter walk to The Pimple - 3 km - 2hours return. The views from the top of the cliffs are impressive.
There is a downloadable brochure with a good map at http://parkweb.vic.gov.au/__data/assets/pdf_file/0003/314490/Park-note-Burrowa-Pine-Mountain-National-Park.pdf.

Bluff Creek Nature Trail
For those who want only a short bush walk it is possible to park and walk 350 metres to Bluff Creek Falls. In dry weather the falls are reduced to a trickle but if there has been rain they can be spectacular. The walk (a combination of a wide bush track and a few steps) can be part of longer walks with Bluff Creek being a distance of 2 km (4 km return) and Campbell's Lookout being 700 metres beyond the falls.

* Prior to the arrival of Europeans the district around Tintaldra was home to the Wiradjuri and the Jaitmatang Aboriginal peoples.

* In 1837, when a severe seven-year drought first hit the Monaro district, Charles Huon de Kerrilleau, led by local Aborigines, headed towards Tintaldra in search of fresh grass and water. He became the first European in the Tintaldra area.

* Within a year a Tumut landowner, Rowland Shelley, claimed the 'Tintaldra' run for his brother William and the 'Weleregang' run for himself. These cattle stations were the first white settlements on the Upper Murray.

* 'Tintaldra' station changed hands several times until taken over, in 1854, by Sydney Grandison Watson who effectively became the owner of the town.

* By the 1860s disillusioned gold prospectors began to search of land in the area.

* Sydney Watson replaced a storage shed on his run with the Tintaldra store, which is still standing, which he erected in 1864. Around that time Watson built his own home.

* In the 1860s a hand-hauled punt was established across the river by Christian Vogel from Tumbarumba. Vogel, a blacksmith, carpenter and dentist, built a house for his family.

* The town grew because of the punt. It became a customs destination between NSW and Victoria.

* In 1892 a bridge replaced the punt and a butter factory opened at Cudgewa.

* In 1901 Federation ensured that the town no longer operated as a customs collection point.

* In 1912 an Australian Rules football team was formed in the town.

* 2000 acres of the 'Tintaldra' run were bought up by the Repatriation Department after the First World War. The run was divided up into 200-acre blocks and sold to ex-servicemen with repayments to be made over 40 years. The department supplied building materials but the men had to do the rest.

* A bakery operated behind the general store from 1927 but it closed due to lack of manpower in the Second World War.

* On 13 January, 1939 the town was nearly wiped out by the Black Friday bushfires. 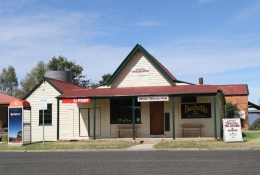 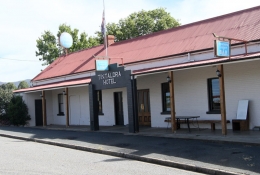 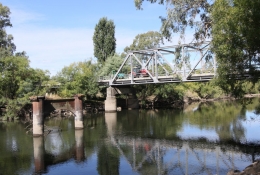 The bridge across the Murray River at Tintaldra 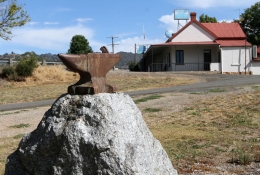 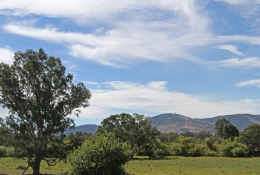 The view of the valley and foothills from the Tintaldra Hotel.