Small rural service town known as the Heart of the Parks

Tintinara is a small rural service centre located at the heart of a rich sheep, beef and cropping area. Located between the Ngarat National Park, an area of mallee and desert, the town is surrounded by harsh and unforgiving land which, for many years, was known as the '90 Mile Desert'. It wasn't until the arrival of the 'scrub rippers' (which ripped the mallee out and ploughed the soil at the same time) and the judicious use of trace elements missing from the soil that the land became productive. Today there is a pleasant walking trail around the edge of the town and the Tintinara homestead is an interesting reminder of life in the area in the 1860s.

Tintinara is located 188 km south-east of Adelaide on the Dukes Highway via Murray Bridge and Tailem Bend. It is 18 metres above sea level.

No one is sure exactly what the town's name means. Some sources claim it was named after an Aboriginal worker named Tin Tin who was employed on Tintinara Station. In The Register in 1919 there was an explanation: "We had a smart young blackfellow in our employ, with a name that sounded like Tin Tin. We liked the sound of it, and when choosing a name for the [pastoral] station, we put 'ara' at the end of it, and made Tintinara of it. Tin Tin was of the Coorong tribe, and in his white moleskin trousers, blue shirt and cabbage-tree hat, was worth looking at." Others argue that "tin-tin-yara" was an Aboriginal term for the constellation known as Orion's Belt. This explanation, which was suggested as early as 1841, argued that tintinyara meant "a group of youths who hunt kangaroos and emus on the great celestial plain".

Tintinara Visitor Information Centre
Located in the Old Railway Station on the Dukes Highway, the Visitor Centre has recently been painted with an interesting mural which depicts the beef, sheep and wool industries of the surrounding district. In front of the visitor centre are a number of silhouettes of sheep with a shepherd and a sheep dog. There is also a silhouette of a mallee fowl. As well there is an impressive, and vital, D pattern Comet windmill with a 40 foot tower, a 24 foot fan diameter and a pumping capacity of 10,000 gallons per day. There is an interesting sign which explains the importance of water to the district: "Large areas of land to the south of Tintinara were cleared in the early 1960s. Finding suitable stock water proved to be very difficult. W.B. Ashby Pty Ltd bought the Taunta Downs property 33 kilometres south west of Tintinara in 1959 and started clearing land in 1960. The Mines and Energy Department drilled 40 bores, and well holes were dug to depths of between 8 feet and 100 feet.
"Most of the water was too salty for stock but 12 bores were equipped with small windmills. After two years the 12 windmills were relocated onto new bores and wells as the water became too salty resulting in large numbers of stock deaths. To help with the salt problem, water was carted out from Tintinara to be mixed with the bore water.
"At this stage a bore was drilled to 410 feel, 200 feet with 6 inch casing plus 210 feet of 4 inch casing in an attempt to find fresh water on Taunta Downs but was unsuccessful.
"In another attempt a site was chosen on Stoneleigh Park, an adjoining property and a bore was sunk to 50 feet finding a supply of fresh water of 4,500 gallons per hour. A two mile easement was set up and this mill was erected in 1968. Four miles of 2 inch poly pipe was laid to a 22,000 gallon tank situated centrally on the property."

Walks in the area
Tintinara Heritage Walking Trail
This trail departs from the Heart of the Parks Visitor Centre and continues south between Dukes Highway and the old railway line.

Tintinara RSL Memorial Walking Trail
There are a number of access points (the southern parking bay on Dukes Highway is the easiest) to this circular walking trail which is known for its impressive displays in the spring of wildflowers and 25 species of orchids including the endangered metallic sun orchid. The walk is flat and pleasant. It can also be accessed from Emu Springs Road, Chellew Street and Filmer Street. There is a useful map available at the Visitor Centre.

Tintinara Homestead and Post Office
The homestead was built in 1865 and shortly afterwards it became the Post Office. For a number of years it became the stopping point for the Tolmer gold escort which brought gold from the Victorian fields to Adelaide. The building's walls were once papered with old copies of the Adelaide Chronicle which are still visible. It is located on Homestead Road 8 km outside Tintinara and clearly signposted. For more information check out https://tintinara.com.au/visit/tintinara-homestead.

Tintinara Woolshed and Outbuildings
The Woolshed and outbuildings are only a few hundred metres from the Tintinara Homestead. They were built in 1865. The woolshed is now a solitary building standing in a paddock although it is worth noting that the limestone walls are 80 cm thick and the roof timbers, some of which are 11 metres long, were carted here from Kingston South East. It is recognised as an fine example of a farm building from the time.

Mt Boothby Conservation Park
Located 28 km west of Tintinara and accessible only by 4WD, Mount Boothby Conservation Park is 4045 ha of flat mallee and heathland with small outcrops of pink gum and granite outcrops. One of the granite outcrops is Mount Boothby which is 129 metres high. The vegetation consists of dwarf oaks, tea trees, yaccas and desert banksia and in spring there are wild orchids including the rare metallic sun orchid. The park is home to echidnas, western grey kangaroos, emus and mallee fowl. For an excellent description check out https://vk5pas.org/2015/01/17/mount-boothby-conservation-park.

Ngarkat Conservation Park
Located 28 km east of Tintinara, Ngarkat Conservation Park covers a total of 270,152 hectares. It is now a collection of parks which includes the original Ngarkat and adjoining parks of Mount Rescue, Mount Shaugh and Scorpion Springs.
This park features a mixture of vegetated remnant coastal sand dunes, mallee and heathlands. The park has a network of trails ranging from ten minute walks to five hour hikes. It is also home to an array of wildlife including echidnas, pygmy-possums, dunnarts, Western Grey kangaroos, lizards and more than 120 species of birds. One of the highlights is the view from Tyms Lookout which is a 2-3 hour hike. There is a 29 km Border Track which runs from north to south and, because of the high fire danger, is only open from 1 April to 31 October. Camping permits are available from the Tatiara District Council and various self-registration points around the Park. Please check with the Tatiara District Council on (08) 8752 1044 for 4WD access and conditions. There is a useful National Parks website. Check out https://www.parks.sa.gov.au/find-a-park/Browse_by_region/Murray_River/ngarkat-conservation-park.

* The area was settled by Europeans in the 1840s when graziers moved into the district with flocks of sheep.

* The 'Tintinara' homestead, including the woolshed and outbuildings, dates from the late 1840s.

* In 1852 Police Inspector Tolmer created a track from the Mount Alexander goldfields in Victoria to Adelaide. One of the stopping points on the track was where the old Homestead now stands which was used as a watering spot.

* The Tintinara Tennis Club was established in 1919. 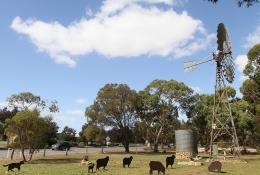 Silouettes of sheep and the impressive windmill outside the Visitor Centre 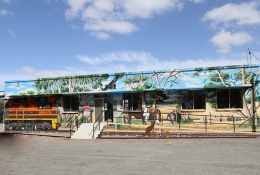 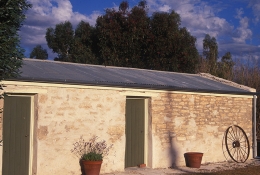 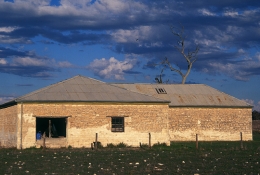 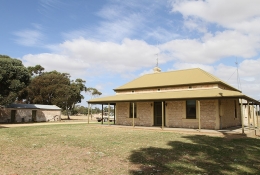 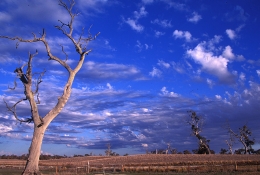