Popular holiday and service town on the Murray River.

There are 23 beaches along the Murray River all located within five minutes of Tocumwal. Not surprisingly this service town is also known as a popular holiday destination attracting visitors eager to fish for the famous Murray Cod; play on the town's 36-hole golf course; swim, water ski, canoe or kayak up and down the meandering river; go bushwalking and birdwatching; and eat fresh produce from the rich, irrigated flat plains which surround it.

Tocumwal is 681 km south-west of Sydney via Wagga and Jerilderie and 696 km via Albury; 269 km north of Melbourne via Seymour and Shepparton; and 112 m above sea-level.

It is likely that the name of the town is a corruption of the Bangarang Aboriginal word Tucumiva (or Tucumival) meaning "deep hole" which is a local feature known as 'The Blowhole', a bogey hole in the Murray River which is some 25 m deep.

The Big Murray Cod
There are two Big Murray Cods - both, not surprisingly, on the banks of the Murray River. One is at Swan Hill and one, known to the locals as "The Fish" at Tocumwal. It can claim to be the first (at least in the minds of its creators) “Big Thing” in Australia. As early as 1963 Trixie Moore, Alice Johnson and Lorna Nash, all members of the Ladies Auxiliary of the local Chamber of Commerce and Agriculture, came up with the idea of promoting the town by having a Big Fish and a “big” attraction. However the Big Banana at Coffs Harbour was built in 1964 and the three women took four years to raise the $4,000 needed to get Duralite in Melbourne to build their fish. It was made from fabricated steel truss and fibreglass mouldings from a plaster and clay sculpture but did not appear until 1967. Over the years the poor fish has been abused. Graffiti has had to be removed. It's been shot at by crazies with guns. The fins have been cracked. There was even a public meeting “Icon or Eyesore?” held to discuss its future. Today it is a prominent landmark in the town.

Tocumwal Foreshore Park
The River Foreshore Park on Deniliquin Street in the centre of town is a perfect spot for swimming, fishing, boating, barbecues and picnics. It has excellent views of the Murray River as well as a children's playground and a boat ramp.

The Tocumwal Historic Bridge
The Tocumwal Rail Bridge over the Murray River was built in 1895 as a road bridge. When the railway arrived in 1908 it was strengthened. It was closed in 1988.

The Murray River Beaches
There are a total of 103 beaches along the Murray River between Yarrawonga and Tocumwal. Not surprisingly, visitors are drawn to these large sandy beaches, unusual alongside an inland river, with their backdrop of red-gum forests and abundant wildlife. There are over 90 species of birds in the area. The reserves along the river are ideal for camping, bushwalking, cycling, fishing, swimming, bird watching, canoeing, water skiing and boating.

Tocumwal Railway Heritage Museum
The old Tocumwal Railway Station is located on Deniliquin Road at the western end of town. There are three museum areas at the site: one has photos and memorabilia dating back to 1908 and a steam train mural; there is rail and Lion's Club memorabilia; and the third museum has old furniture and memorabilia, together with a working model train display. It is open by appointment. Contact the Visitor Information Centre. For more information check https://mgnsw.org.au/organisations/tocumwal-railway-heritage-museum.

Tocumul Historic Aerodrome Museum
Located at the Tocumwal Bowls Club in Adams Street and open from 11.00 am Monday to Saturday this is a celebration of the town's importance during World War II when an aerodrome was commissioned by the US Army Air Corps and constructed as the McIntyre Field heavy bomber base in preparation for a possible Japanese invasion. The complex was the largest in the Commonwealth at that time. It had 450 buildings spread over 25 square miles with 114 km of roads interconnecting it all. There were four runways, each nearly 2 km in length. The demand for tarmac alone consumed the output of BHP for three months. The project cost £2 million and was completed within four months, with planes using the airstrip within five weeks. American forces moved to Tocumwal but only briefly as the situation in the Pacific improved and they moved north to Queensland. The aerodrome then became the RAAF Station Headquarters for training Liberator bomber aircrews. Check out http://tocumwal.weebly.com/ for more details.

Chrystie's Museum
Chrysties Museum is located at 139 Thornburns Road and is open from 10.00 am - 4.00 pm daily. George Chrystie has been collecting treasures for nearly seven decades and the result is 1.8 ha of memorabilia ranging from classic caravans through Ford Zephyrs to rare tractors, kerosene lamps, old logging trucks, vintage cars, old newspapers and magazines, and farm equipment. Tel: (03) 5874 3358. Check out https://www.visitnsw.com/destinations/country-nsw/the-murray/tocumwal/attractions/chrysties-classics-and-collectibles-museum for more details.

The Blowhole Reserve
Located 11 km from Tocumwal on the Rocks Road, the Blowhole Reserve is a natural phenomenon which occurs when the Murray River is low. The blowhole seems to come alive as it flows and bubbles.

The Legend of the Blowhole and the Murray Cod
The word "Tocumwal" is supposed to come from a Bangarang word, "Tucumiva", meaning "deep hole." This is a reference to "The Blowhole" which is sacred to the Ulupna and Bangarang Aborigines. According to Aboriginal folklore a giant Murray cod lived in the waterhole. It sometimes ate young children who fell in. There is a story of how a young boy was chased into the blowhole and emerged in the Murray where the old bridge now stands. This suggests that there is an underground stream which only flows in times of extreme drought.

Women's Auxiliary Australian Air Force Memorial Creek Walk
A 3.2 km walk on the Barooga Road commemorates the RAAF involvement in Tocumwal during World War II and particularly the involvement of women in military aviation from 1941 onwards. The sign on the walk explains: "The involvement of women in military aviation began in 1941 with the creation of the Women's Auxiliary Australian Air Force. The WAAAF was formed because the RAAF urgently needed telegraphists for signal duties, replacing men required for active service. Eventually WAAAF personnel served in more than 60 roles. At their peak, WAAAF numbers exceeded 27,000." Up to 400 women served at Tocumwal between 1943 and 1946.

Strawberry Picking
The area around Tocumwal is known for its strawberries. Probably the best place to start is The Big Strawberry at Koonoomoo, south of Tocumwal, which is located at 7034 Goulburn Valley Highway and is open from 8.00 am - 5.30 pm seven days a week. It offers a range of strawberry products including jams, strawberry pancakes and a year round supply of fresh strawberries. Check out http://www.cobrambarooga.org.au/companies/231/30/The-Big-Strawberry.html#/None or tel: (03) 5871 1300.

* Prior to the occupation by Europeans the area was occupied by the Bangarang Aboriginal people for at least 20,000 years.

* The first runs in the area were operating before the 1840s; one, with frontage on the Murray, was reputedly owned by the whaling entrepreneur, Benjamin Boyd.

* By the 1850s a ford crossing the Murray had been established near where Tocumwal now stands.

* The village of Tocumwal was officially recognised in 1872. That year a punt across the river was established.

* Tocumwal became important as a border customs depot and as a river port for the shipment of produce from the Riverina.

* By the 1890s Tocumwal had become a riverside holiday resort town. At this time the Victorian Government removed 300 snags from a 400 metre section of the Murray River.

* The town got its first bank, the Commercial Banking Company, in 1893.

* The railway arrived in 1908. This resulted in the bridge having to be strengthened.

* By 1911 Victorian Railways were offering a daily rail service to Tocumwal.

* In 1942 an aerodrome was commissioned by the US Army Air Corps and constructed as the McIntyre Field heavy bomber base as preparation for a possible Japanese invasion. The complex was the largest in the Commonwealth at that time. It had 450 buildings spread over 25 square miles with 114 km of roads interconnecting it all. There were four runways, each nearly 2 km in length. The demand for tarmac alone consumed the output of BHP for three months. The project cost £2 million and was completed within four months, with planes using the airstrip within five weeks. American forces moved to Tocumwal but only briefly as the situation in the Pacific improved and they moved north to Queensland. The aerodrome then became the RAAF Station Headquarters for training Liberator bomber aircrews.

* After the war Tocumwal became an aircraft depot until the 1960s when thousands of planes were smelted down.

* In 1987 a new bridge, the Edward Hillston Bridge, replaced the historic bridge. 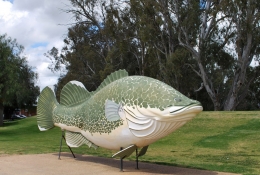 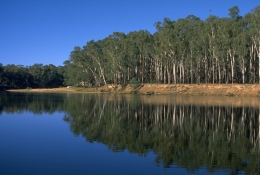 A beach near a bend in the Murray at Tocumwal. 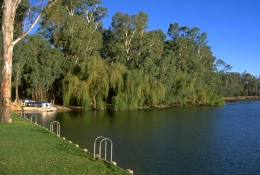 The Murray River from the park at Tocumwal. 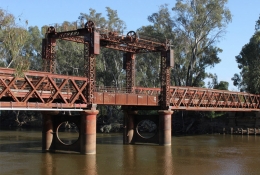 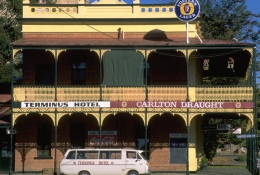