Toora is a small rural service town surrounded by undulating hills which are primarily used for dairying. Historically a timber town, providing timber to Melbourne and as far afield as India, today the town is home to one of the first wind farms in Victoria, an easy access point for visitors to Wilsons Promontory, and includes Agnes Falls on its list of surrounding attractions.

Toora is located 186 km south-east of Melbourne via Koo-Wee-Rup and Leongatha.

It is claimed that "toora" is a GurnaiKurnai word meaning "woman, look after the fire" or "keep the fire alight" and was used as an instruction when men went to Wilsons Promontory for religious ceremonies. The town was originally known as Muddy Creek.

Toora Heritage Trail
The best way to see historic Toora is to wander around the town's streets (it only has four main streets - Harriet, Dutton, Stanley and Mill Streets - all of which are bisected by Gray and Victoria Streets). The town has highlighted ten of its older buildings - 'Allthrea' at 17 Harriett Street (1905), the Toora Private Hospital at 22 Harriett Street, the police station and residence (1891), the Royal Standard Hotel at the corner of Victoria and Stanley Streets (1889), the former Bank of Victoria building at 35 Stanley Street (1906), the former Great Southern Co-Operative (1904) at Stanley and Gray Street, the former Union Bank building (1907) at 34 Stanley Street, the Toora post office and residence (1915) at 13 Stanley Street and St Thomas' Church of England (1892-1910) at 7 Dutton Street.
The information on the boards is quite detailed. For example, outside the Bank of Victoria is a sign which notes: "The Bank of Victoria was the first bank in Toora to open its own premises on 21st December 1906. The building was erected at a cost of £1535. In 1927 The Bank of Victoria amalgamated with the Commercial Banking Company of Sydney. During the rationalisation of branches in 1942 the Toora branch was closed and the building was sold in 1947 for £750. Blackwood lining boards were used extensively inside the building, the doors were 1.5 inches thick and the ceilings were12 feet high. The bank vault in the banking chamber was 7 ft tall and there was a state of the art bell system connecting the kitchen, main rooms and front and back door."

Great Southern Rail Trail
The Great Southern Rail Trail is a 74 km journey from Leongatha to Yarram. The section involving Toora runs for 19 km across flat dairy country on a relatively straight line and has as its main attraction the huge wind turbines on the hills above Toora. For more details and information check out https://www.railtrails.org.au/trail?view=trail&id=144.

Heritage Pear Orchard
At the corner of Mills and Gray Streets is the Heritage Pear Orchard where horticulturists are growing varieties of pear propagated by Australia's early European settlers. It is a "walk through" orchard maintained by local enthusiasts. Designated days of pruning, grafting and spraying help maintain over 50 varieties of pears which are sold seasonally.

Toora Wind Farm
Toora Wind Farm can be viewed from the lookout on Silcock's Hill and there is parking and information boards near the turbines. The twelve turbines, manufactured in Denmark by Vestas, provide a total output of 21 megawatts - sufficient to power 6,600 homes, thereby cutting greenhouse emissions by 48,000 tonnes of CO2 per year. The towers, manufactured in Bendigo, are 67 metres in height, weigh 117 tonnes and are each set in 600 tonnes of reinforced concrete. The blades of the rotors are 33 metres in length (66 metres in diameter), made of reinforced plastic and carbon fibre, incorporate sensors to read the wind speed and direction and thereby feed the information into a computerised system. They also possess a yaw mechanism to turn the rotors in the direction of the wind. There is a useful website - http://ratchaustralia.com/toora/about_toora.html - which provides all the relevant information about the wind farm. Construction of the wind farm, one of the first in Victoria, started in 2001.

Agnes Falls Reserve
Located 12 km north-east of Toora via Silcocks Hill Road and Hazel Park Road, are the Agnes Falls, one of the highest waterfalls in Victoria. They are located at the Agnes Falls Reserve where the river plunges 60 m over the gorge. The lookout over the falls is an easy 200 metre walk from the car park. The damming of the river above the falls ensures the water supply to Welshpool and other local towns. The Parks Victoria Park Notes observe: "Agnes Falls Scenic Reserve protects a small remnant of the forests that once covered the Strzelecki Ranges. Tall Southern Blue Gums together with Blackwood and Silver Wattles grow within the sheltered gorge and along the banks of the Agnes River. The cool moist conditions here support a diverse understorey of Hazel Pomaderris, Blanket-Leaf, Dogwood, Prickly Moses, Clematis and a ground cover of ferns. The drier north facing slope and ridge support an open understorey of native grasses and sedges. The canopy of tall eucalypts provides food and nesting areas, supporting many different species of birds including honeyeaters. The understorey, composed of tall shrubs and small trees, is home to the Eastern Yellow Robin, often seen perching sideways on low branches, eyes intently searching the ground for food." There is a useful, downloadable Park Note at http://parkweb.vic.gov.au/explore/parks/agnes-falls-s.r.

Port Franklin Koala Walk
Located at Dorans Road, just off Lower Toora Road, this 400 metre walk was created in 1997 by the Franklin River Landcare Network. It is a short walk which meanders through vegetation where koalas often reside. For more information check out https://walkingmaps.com.au/walk/294 which provides a map and photographs of the route.

Toora Wetlands and Toora Bird Hide
The Toora Bird Hide is located at the end of Toora Jetty Road and is easily accessible via a well maintained boardwalk. The Bird Hide overlooks an area which was classified as a wetland of international importance by the 1975 Ramsar convention. The boardwalk to the bird hide is 500 metres long, wheelchair friendly and is an easy 10 minute return walk.

Fishing at Corner Inlet
Anglers can access the fish in Corner Inlet from the an all-tides boat-launching area. To access the ramp follow Toora Jetty Road from the town. The shoreline of Corner Inlet Marine National Park is a complex network of mangroves, mud banks, saltmarshes, seagrass beds, rocky islands and deeper channels which support huge numbers of migratory birds, seafloor animals and plants.

The Toora Tin Mine
Although the mine is no longer in existence there is an excellent mural (located beside the children's playground in Stanley Street) in town and a sign which tells the story of the remarkable engineering feat which saw water brought 21 km to the mine to help in the extraction of tin deposits. A sign beside the mural explains: "This is an example of the extraordinary water race that carried water to the Tin Mines. This one was 15 chains (30 m) and 150 feet (45.75 m) in height. It was completed in 1894. In 1888 the Agnes Tin Mine Company No.2 was started by a syndicate made up on William Yeomans, his son W.L. Yeomans, J. Lowe and John Harvey. Yeomans began mining using a gravitation fed hydrolic method of mining which involved high pressure blasting with a jet of water to wash the tin free. The mine depended on great quantities of water that were obtained from the Franklin and Agnes Rivers some miles away. In an extraordinary engineering feat wood water races were built to bring water from the Franklin River. They followed the contours of the land so skilfully that the water flowed purely through gravity for 13 miles (20.92 km)."

* Prior to the arrival of Europeans the area was the home of the Boonwurrung Aboriginal people.

* By the 1850s the Buchanan brothers had established a sawmill at Muddy Creek. The township's prosperity was based around the mill until the 1870s. This was partly ensured by a contract with the Indian government to produce railway sleepers. The sleepers were made at Toora and conveyed to offshore ships by barges.

* By the mid-1870s the timber industry had collapsed due to falling prices.

* By 1880 Toora was the name of the parish that was surveyed. That same year a school was opened.

* The new site for Toora was subdivided in 1888 after one of the largest tin mines in Victoria began operations 10 km north on Silcocks Road.

* By 1889 the town of Muddy Creek had been renamed Toora.

* The railway was extended from Leongatha in 1892.

* A school connected with the tin mine opened in 1907.

* Around 1910 Catholic and Methodist churches were consecrated in the town.

* Excavations for a tin mine stopped in the 1930s during the Great Depression and never reopened.

* A Bush Nursing Centre and Hospital were opened in 1933.

* The local dairy factory was closed by the end of the 1990s.

* The Toora wind turbines were installed in 2001.

There is a useful local website. Check out https://www.visitpromcountry.com.au/towns/toora. 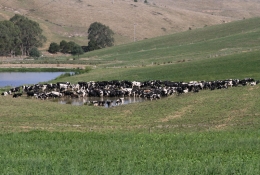 A dairy herd of Fresians on the rolling hills above Toora. 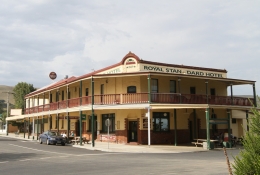 The Royal Standard (1889) at the bottom of the town's main street. 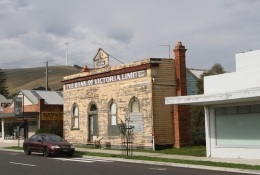 The Bank of Victoria (1906) in Stanley Street 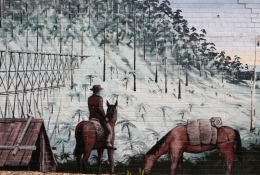 The Toora Tin Mine Mural 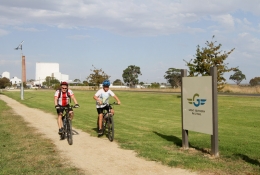 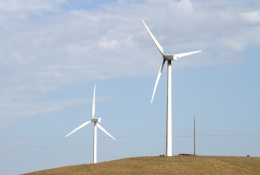 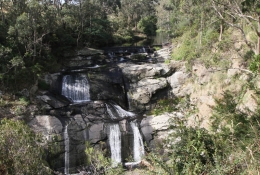 The Agnes Falls 12 km from Toora